This is just for fun. At first sight this seems impossible - the smallest stars are heavier than the heaviest planets, and how can something heavier orbit something that is lighter? But what if you have a very dense star and very large very low density planet? And if you interpret "orbiting it" as "having barycenter (the "center of mass of the system") within the planet"?

Also, could a star sometimes be lighter than a planet, is that possible at all? I'll also describe a way that a heavier object can, in a way, "orbit" a lighter one - a way to get a heavier star move in such a way that the barycenter of the system lies within a large low density planet - can you figure out how, before I get to it?

Is there any chance of any of this happening in practice? Let's take a look.

Here is the largest exoplanet discovered

Strictly speaking our moon doesn't orbit the Earth. It orbits the barycenter of the Moon and Earth

Indeed our solar system's barycenter is outside the sun much of the time. But our sun couldn't be said to orbit any of its planets. 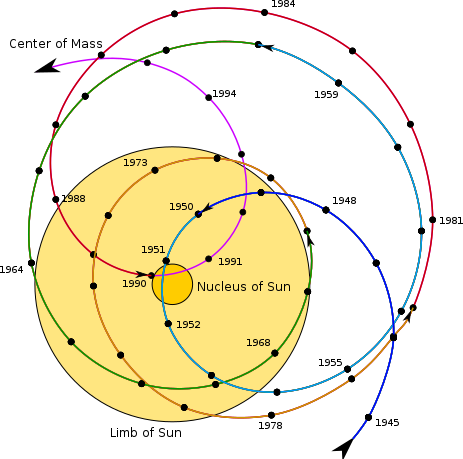 Motion of our solar system's barycenter relative to the sun. Image from wikipedia - see attribution here.

Our solar system's barycenter is often outside the sun, so strictly speaking the sun and planets orbit its barycenter. But in this article, we are looking for a star and planet with the barycenter inside the planet all the time. Is that possible?

Now for our star, choose a cool dense star. This white dwarf is 1.05 times the mass of the sun but around the same diameter as our Earth. It is cool also, temperature only 3,000 K, so it's probably not going to blow away the envelope of our gas giant.

The barycenter is calculated as

So, the barycenter is less than 1/2000 of the distance from the center of the star towards the planet.

So that didn't work, we are way out, by a couple of orders of magnitude.

What about red dwarfs? Though not quite so small as white dwarfs, they are also much lighter.

It's still not going to work, sadly. Barycenter will be 1/181 of the way from the center of the star to the center of our planet. But even if it orbits touching our star, it's surface is only 1/3.5 of the way. Closer than for our white dwarf - but still out by well over an order of magnitude.

We are so far out here, it doesn't seem too likely to work with conventional planets and stars.

You could try a brown dwarf as your "star" but I'm not sure they really count as stars.

I can think of some ways we could try to get this to work.

1. Start with a white dwarf - and somehow get it to lose nearly all of its mass. You end up with a small bright glowing ember of a star. No nuclear fusion but generally thought of as being still a "star".

2. Start with a red dwarf, remove most of its gas from it; its core would continue to fuse for some time.

In either of these scenarios, the star could for instance get most of its mass stripped away during a fast close flyby of a black hole. So such stars could perhaps exist naturally but are surely rare.

PROBLEMS WITH THIS SCENARIO

These stars could even be less massive than gas giants like Jupiter. So your planet could also be more massive than the star - if these stars do exist naturally anywhere in our galaxy or universe.

But then - if you remove most of the mass of a white dwarf, it is no longer compressed by gravity, so would expand.

And if you remove most of the gas from a red dwarf, again it would no longer be under so much pressure in its core, and so it would turn into a brown dwarf.

They'd continue as stars presumably for a while before this happens but it might not be for very long.

It depends how you do it. If you can remove most of the mass from a white dwarf, and still keep it hot - well essentially the result is just a very hot ball of gas. So that could count as a "star" until it cools down. After all white dwarfs are still called stars although they no longer have any fusion going on inside.

Or - you make the star artificially, as in 2010: Odyssey Two where the self replicating monoliths make Jupiter into a star. A star with the mass of Jupiter could easily "orbit" a larger planet of similar mass, with the barycenter inside the larger planet.

But then - could it continue to sustain nuclear fusion? Is that scenario really feasible or is it something that can only happen in science fiction?

You could turn a planet the size of Jupiter into a massive nuclear bomb, if you could get all its deuterium to fuse. If it happens to have a segregated high density deuterium layer (which Jupiter doesn't seem to have) and you then drop a large mass of plutonium into it, maybe it could fuse. See Necessary Conditions for the Initiation and Propagation of Nuclear Detonation Waves in Plane Atmospheres

But that's just an explosion. Soon over.

For more on this, see Turning Jupiter into a star (stack exchange)

TRYING TO SUSTAIN FUSION IN AN ARTIFICIAL OR UNUSUALLY FORMED STAR

To sustain fusion you need a way of keeping the star compressed. Which - short of some mega technology to physically contain it, would seem to require adding mass.

Could you drop slow moving heavy dark matter particles into your miniature proto star, so many that you get a "dark star"? (If such particles exist) So supplying extra gravity to contain it for fusion?

But all those ideas would of course also shift the system's barycenter back towards the star. You could try doing the same to the planet to help shift it back again. They might also compress the star or planet enough to make a difference

I think this is too hypothetical to follow much further since we haven't yet detected slow moving dark matter, and don't know what properties the dark matter might or might not have or if it is slow enough moving to get caught in the gravity field of a planet or star.

This could be through megatechnology. Or maybe at some point a small planetoid or moon orbits very close to the star then through a sequence of gravitational encounters with other planets and moons, it gets flung into a more distant orbit around a planet far from its star while it is still glowing hot.

If you heated our Moon to thousands of degrees centigrade, it would shine like a second sun in our sky until it cooled down.

This is another idea. Have a binary system of two equal mass stars orbiting a common center. Put a planet in that central position.

Now you have not just one star, but two stars orbiting your planet.

The main problem now is to keep it stable. It's not going to be easy to keep your planet in that one spot. But if it is a large planet, and the two stars are tiny, that doesn't matter much, so long as it stays approximately in the right place.

So - I suggest, two approximately solar mass, Earth sized cool stars like this:

And in between, a large gas giant like this:

Now set the two stars orbiting around their common center.

Now, set your planet on a corkscrew orbit between the two stars. Its center of mass travels back and forth on a spiral path from one star to the other and back again, over and over, a newly discovered type of orbit.

Corkscrew planets spiral back and forth between two stars (Image: Detlev van Ravenswaay/SPL)

With such a large planet, twice the diameter of Jupiter, and both stars tiny, the size of Earth, if you chose the separation well, this corkscrew path I think has a chance of keeping the midpoint of the two stars inside the planet at all times.

His paper is here: Stable Conic-Helical Orbits of Planets around Binary Stars: Analytical Results. He uses for illustration Kepler-16 which has two stars with mass ration of 1 to 3.

Whether a planet can ever get into such an orbit, and whether such a system actually exists anywhere in our galaxy or universe is another matter. I leave that to "future research" :).

Probably no, for a single star. But if you count a moon, heated to the temperature of a star, as a short lived "star" then perhaps yes.

Possibly yes, though a little hard to see how it would ever happen in reality, if you have two stars "orbiting" the planet.

If anyone has any other cool ideas about how you could do it, either artificially or in our universe through some rare combination of events, do say in the comments.

This originated as my answer on Quora to: Is it possible for a star to orbit a planet? Has it ever been observed?

For other posts here in a similar vein, see