I have had lots of questions about this today because of a poorly researched Daily Star sensationalist article based on a many years out of date NASA press release. As usual with Google News this nonsense has gone right to the top of its search results. They really do need to fix this!

Anyway I am writing this in the hope that it gets into Google News and helps some of the people getting scared by this story. So far I can't see any debunking articles there and the Science 2.0 articles do often get placed high in Google News.

Phil Plait of "Bad Astronomer" fame has a few choice words about this "tabloid fish-wrapper" - in case you don't get it, newspapers are often used to wrap fish and chips - he's suggesting that's all it is good for.

… and because some tabloid fish-wrapper is scaremongering about this, I have to say THIS again too: No, the asteroid Apophis won’t hit us in 2036. https://t.co/onECl6DFdd pic.twitter.com/BuCy92XqOK

Here are some example headlines - just searched for Apophis in the news tab of Google. It's using a Google Adwords tool to simulate a search from the US. 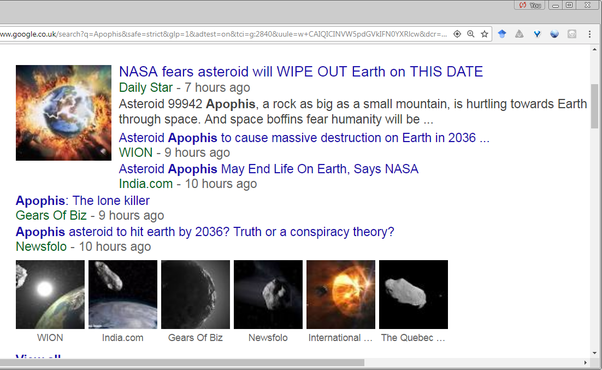 The answer is NO, not in the near future. It is not going to hit in 2036 - if you see a page that says it will, it is at least four years out of date.

Any paper that runs this story has no system in place to check stories of this type for accuracy before publishing them.

Yet anyone who doesn't have a good background in astronomy who looks at google news today has no way of knowing that those stories are all nonsense.

Here are a couple of the articles that are getting everyone worried.

I’d add these sources to your blocked sources as well as any other site that ran this story - if you have the ability to do this. It’s another example of Google favouring very inaccurate or fake news,

I am not sure what their source was but this is an example of those old NASA press releases. Note the date, 2009

SO WHAT IS THE TRUTH ABOUT APOPHIS?

It's a small asteroid 370 meters in diameter. It is not large enough for global effects. One of those hits Earth every 80,000 years or so. 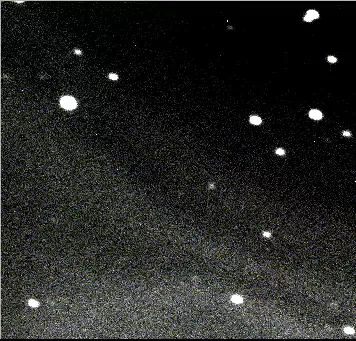 That's why it's not classified as an impact hazard at present.

IF IT HITS WHAT ARE THE EFFECTS

They don't expect  it to hit in 2068, and are 99.9993% certain that they show it will miss. There are other potential hits calculated through to 2103 but those are even more improbable. But what if it does hit?

It's a small asteroid only 370 meters in diameter. So first what happens if we just sit back and do nothing and it hits Earth?

They looked at the effect of an impact into the sea off the coast of Rio de Janiro. An impact of a 200 meter asteroid angle 45°, impact speed 20 km/s and asteroid density 3100 kg/m3 could cause between 7.6 million casualties right next to the city, 2.35 million at a distance of 10 km and scaling down to 11 thousand at a distance of 300 km according to the same study.

The tsunami is only 4.3 meters high in their model, and it doesn’t matter much how far out the impact is so long as there’s a slowly sloping continental shelf as impacts in deeper water create higher waves, but then they get attenuated by distance as they approach the shore.

If it hits in the middle of a deep ocean, not unlikely, it would cause a tsunami but it might not propagate very far - asteroid impact tsunamis behave differently from earthquake ones because the impact it displaces the water but then leaves a hole in the ocean which the sea then would rush back to fill. A tsunami is caused by an earthquake that permanently displaces a large patch of the sea bed upwards or downwards or some similar event and produces stronger waves

If it hit on land it would create a large crater (as a rough guide the crater is ten times the diameter of the asteroid) and that could kill millions of people if it landed in or near a city. If it landed in a remote place the effects could be minimal - and much of the land area to this day is still desert or ice or uninhabited by humans.

It would not have any long term global effects. It is too small for an "impact winter".

all that is assuming that nobody is evacuated from the impact zone and they don't deflect it.

However with Apophis, they would know about it probably several decades in advance. Surely it is almost impossible that they don't deflect it in this scenario with the technology they would have by the 2040s. We could do it already, with a large scale project devoted to it, and in that situation there would be plenty of funding available.

However, if for some reason it wasn't deflected, there is no way the people stay there in the impact zone. They would leave it well before the impact. Probably the death toll would be zero unless some foolhardy people venture close up for a selfie with the impact or such like.

HOW COULD WE DEFLECT IT? - SIMPLEST METHOD, WHITE PAINT

If we do find it is going to hit Earth - well we can deflect it with tiny nudges as we would know long in advance, and so get it to miss. It's only cms per second velocity change, a decade in advance to turn a direct hit to a miss,

If it has a flyby in between it becomes microns per second.

At one point when there seemed to be a chance of it hitting Earth then a scientist worked out that painting it white might be enough to turn a hit into a miss, because it is so sensitive to position during the flybys - dusting it with some white material rather than really painting as such - changes the heat rejection as it spins around lit surface into darkness. That difference between the direction of the light hitting the asteroid and the heat leaving it is enough for a very tiny nudge, spread over the whole asteroid. If you can do that 20 years in advance,that's enough to change it's velocity enough to miss.

He worked out that five tons of paint would do the job.

“Paek determined that five tons of paint would be required to cover the massive asteroid, which has a diameter of 1,480 feet. He used the asteroid’s period of rotation to determine the timing of pellets, launching a first round to cover the front of the asteroid, and firing a second round once the asteroid’s backside is exposed. As the pellets hit the asteroid’s surface, they would burst apart, splattering the space rock with a fine, five-micrometer-layer of paint.

“From his calculations, Paek estimates that it would take up to 20 years for the cumulative effect of solar radiation pressure to successfully pull the asteroid off its Earthbound trajectory. He says launching pellets with traditional rockets may not be an ideal option, as the violent takeoff may rupture the payload. Instead, he envisions paintballs may be made in space, in ports such as the International Space Station, where a spacecraft could then pick up a couple of rounds of pellets to deliver to the asteroid.” Paintballs may deflect an incoming asteroid

So I don't think this is something to worry about. With whatever technology we have by 2048, surely it will be easy to deflect it away in time for 2068 if this is needed.

There are many other ways to deflect asteroids. For more on detecting and deflecting asteroids see:

It is easy to keep up to date with the latest news by visiting this page:

There is no need to know what the numbers mean. Just look at the colour of the first entry. It is ordered with the entry of most risk first and colour coded:

It will have red above orange above yellow above green. Blue objects are mixed in with the others.

So you just need to look to see if the first entry in the table is orange or red. As of writing (August 2017), this has never happened. If it ever does happen, take a note of the “object designation” to the left - this is the name that will be used in news reports to refer to it.

If it is blue, white or green, there is no significant risk at all and the story is fake. If it is yellow then there is a potential risk that reached a level where it is of public interest, but they expect it to be reclassified to white or blue as soon as they have more observations.

If it is orange there’s a level of risk that needs close attention but it is not yet certain. If it is red then an impact is predicted. But if it is orange or red you won’t need to use that table; it will be on the national news and everywhere.

For more about this see again see:

See also List of the articles in my Debunking Doomsday blog to date and you can try searching that page for a word like “Nibiru” or “Yellowstone” or whatever to find articles of interest.

Also if you want to help make a difference, you can sign and share these petitions- and do have a look at the comments to get an idea of the scale of the problem. Click “Join Conversation” to see more of them.

See also How to add and block sources in Google News

And if you need help - well message me of course and comment on any of these posts - and you can also join our Facebook group Doomsday Debunked. .

You can post there about stories that scare you and get replies from others who help debunk them. Or you can join the No Scary Posts version which only gives debunks (you can use PM's to ask for a post to be debunked).