We often get scary stories saying that Arctic methane emissions are increasing. Recently many are panicking about a story in NewsWeek which has been widely retweeted. When you drill down to the details is about a tiny patch of Arctic methane bubbles in the sea, four or five square meters in area.

This is the original Russian text, as auto translated:

On the right side of the Keldysh, they saw a spot of emerald color against the background of dark water. Approaching it, scientists were able to observe how gas rises from the black depths of the sea to the surface with thousands of bubble filaments, … whose area was four to five square meters … Moreover, the scientists did not need special plastic cones that were prepared to collect methane. Water "boiling" with methane bubbles could be scooped up with buckets. 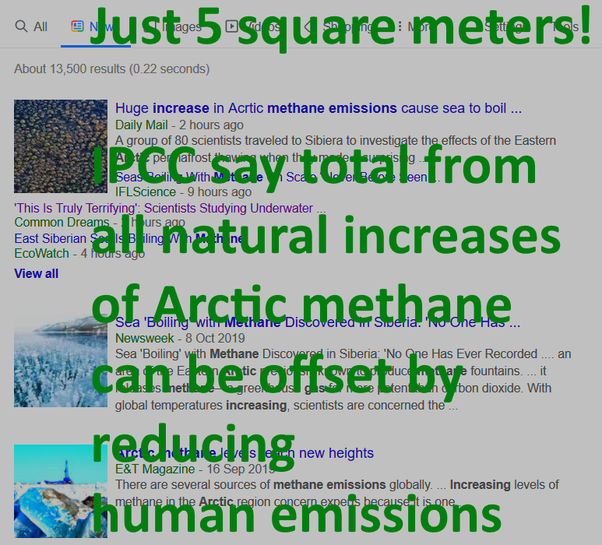 I’ve covered it before here:

This article is part of my work to write articles that present the same material without the exaggerations of the sensationalist press or even sometimes the conventional mainstream press too. It is to support people we help in the Facebook Doomsday Debunked group, sometimes to the point of feeling suicidal, by such stories. .

I also aim to fill in the background details that are often left out in the exaggerated scary stories, that make all the difference.

WHAT THE IPCC SAY

They say that most models do not explicitly take account of methane release because fluxes are small even taking account of the higher global warming potential. There are some more detailed models however, and with these there is still a wide range of views on the matter.

Furthermore, most models described above do not include many of the abrupt thaw processes that can result in lake expansion, wetland formation, and massive erosion and exposure to decomposition of previously frozen carbon-rich permafrost, leading to medium confidencein future model projections of methane. Recent studies that addressed some of these landscape controls over future emissions projected increases in methane above the current levels on the order 10-60 Tg CH4yr-1 under RCP8.5 by 2100

However the range is so great that some of the more detailed models suggest that if you include the effect of the land based permafrost changes, the Arctic could remain a net sink through to 2100. Some models predict a net sink even with high emissions scenarios. 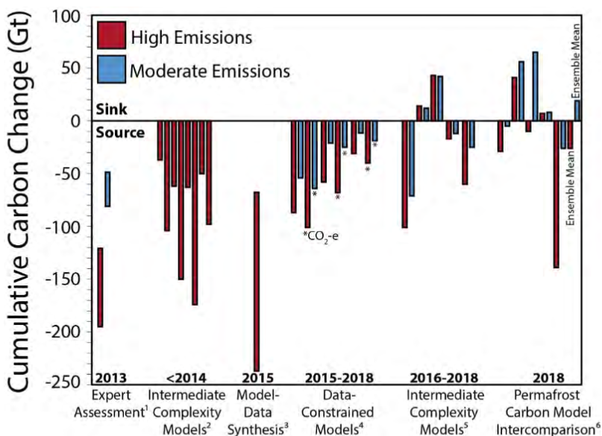 The dates shown at the bottom or the dates the assessments were made or models run.

From the context of the previous paragraph I think this includes all the Arctic sources: “Methane from northern lakes, ponds, wetland ecosystems, and the shallow Arctic Ocean shelves “

The "modest" emissions are for RCP 4.5 so that's pretty much the path we are on with existing pledges. Which for the most part are being kept, some are not, but some are overachieving. The "high" emissions is now an unlikely scenario.

It is so hard to model because it depends on the stimulation of plant growth from the effects of nutrients, warming, extended growing season and CO2 fertilization, which could offset some or all the losses, by sequestring new carbon into the plant biomass and increasing the carbon inputs into the surface soil. (3.4.1.1)

MITIGATION OF HUMAN EMISSIONS CAN DAMPEN EFFECT OF INCREASED METHANE

They cite a paper from 2019 in the last paragraph:

As with total carbon emissions, there is high confidence that mitigation of anthropogenic methane sources could help to dampen the impact of increased methane emissions from the Arctic and boreal regions (Christensen et al., 2019).

This paper actually found that an extreme maximum emission scenario for natural emissions of methane can still be more than offset by the maximum feasible reduction in anthropogenic emissions.

I’ll end by summarizing that paper:

These are the four scenarios they look at in that paper:

Let’s compare this with the IPCC figure 3.11

The Modest level ifor methane emissions (50 Tg a year) happens to be around the same value as most of the studies for the moderate emissions (RCP 4.5) in the IPCC report which in turn is about the same as the path we are on right now.

The extreme level is 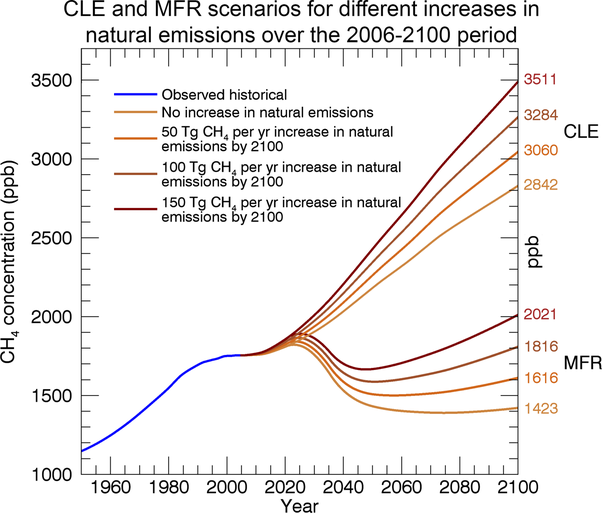 They comment that the extreme level is less likely with the maximum technically feasible reduction in anthropogenic methane levels.

This paper also cites and earlier study that found that the maximum feasible reductions in anthropogenic methane can reduce global warming by around 0.1 to 0.2°C for the 2036–2050 period relative to continually increasing emissions. That’s a significant impact on the goal to keep the rise well below 2.0 °C, preferably 1.5 °C,

They say that if we do reduce the overall methane levels this also makes the extreme case less likely by reducing the warming.

Methane, however, is too often portrayed as solely being able to cause runaway climate change. Despite large uncertainties associated with future projections of Arctic natural methane emissions, our current best estimates of potential increases in natural emissions remain lower than anthropogenic emissions. In other words, claims of an apocalypse associated solely with Arctic natural methane emission feedbacks are misleading, since they guide attention away from the fact that the direction of atmospheric methane concentrations, and their effect on climate, largely remain the responsibility of anthropogenic GHG emissions.