Stephanie Pulford
It’s been a while since Popeye taught us to eat our spinach; vegetables are due for a makeover.  “Whatever sparks their imagination seems to spark their appetite,” says Cornell researcher Colin Payne of a new study led by Brian Wansink of Cornell’s Food and Branding lab.  This research shows that children eat significantly more vegetables when their food has been excitingly renamed.

Wansink's work confirms what the restaurant industry has known all along—if food is described tantalizingly, we are more likely to consume and enjoy it.  Previous research from Wansink supports the common-sense hypothesis that adults are more likely to choose menu items that have been suggestively or imaginatively named.  Thus “Belgian Black Forest Chocolate Cake” outperformed “Chocolate Cake”, even though the recipes were identical. 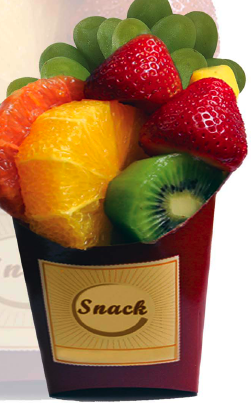 For years researchers have been warning us that children are easy marks for advertisers. Food commercials constitute 50% of television advertisements aimed at children, and the effects are undeniable.  Research from the University of Liverpool suggests that children, especially obese ones, eat bad food and more of it after watching commercials. Stanford’s 2007 study showed that kids will prefer the taste of anything with a McDonald’s label, even McCarrots. The potential popularity of “Tomato Bursts” and “X-ray Vision Carrots” suggests that there is a silver lining to kids’ impressionable natures.  Giving vegetables an extreme makeover allows parents to take branding into their own hands, guiding children to make positive food choices.

Lead researcher Brian Wansink, who is also the author of Mindless Eating, has also championed an end to the “Clean Plate Club” philosophy of child dietary training.  A common theme of his research and writing is that personal portion control and good eating habits can and should be taught early. Encouraging smart food choices in children can prevent lifelong health issues such as diabetes, heart disease, sleep apnea, and hyperlipidemia. Wansink's vegetable-renaming strategy gives parents a valuable weapon in the battle against childhood obesity: their own imaginations.  Convincing kids that vegetables are exciting can make it true.