Stephanie Pulford
The Antarctic landmass is losing its frontier status.  Housing thousands of decreasingly rugged inhabitants in heated, internet-ready comfort, it’s been so well-mapped that we even know where to find the donuts.  Underwater, however, is a different story.  Harsh temperatures, currents, pressure and ice surfaces have kept the submerged landscapes of glaciers inaccessible to all but penguins and Morgan Freeman’s voiceover.

A joint US-British team has nominated a new Ernest Shackleford to explore the uncharted Antarctic underwater.  But this time around, he’s a robot.

Banana yellow and powered by 5,000 D-Cell batteries, Autosub is the unholy union between The Yellow Submarine and The Energizer Bunny.  It is equipped with sonar to map the solid surface of the Pine Island Glacier ice shelf.  Chambers at its leading and trailing edge allow seawater entry for salinity and chemical testing. 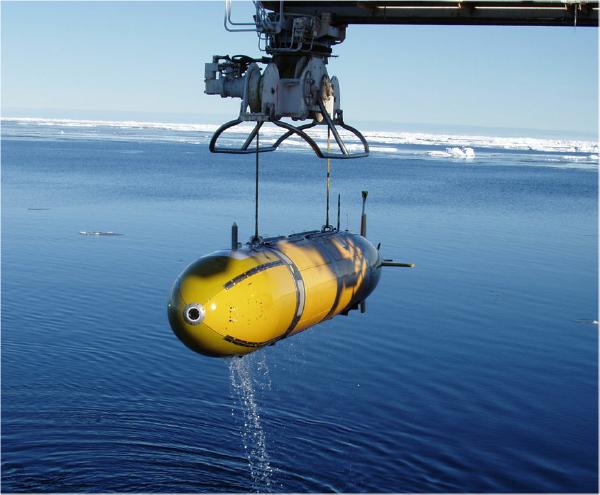 Unmanned deep sea exploration is a familiar strategy to gain information from the inhospitable deep; recall that the Titanic’s wreck was first examined by a plucky little robot named Jason Jr.  Unlike Jason Jr., Autosub is not only unmanned, but untethered— with no lines to its ship, it relies on preprogrammed routes to get it back to the ship within its 72 hour battery life.

Our intrepid robot hero has its work cut out for him.  Terry Hughes called the Pine Island Glacier the “weak underbelly” of the West Antarctic ice sheet for a reason—the ice is reliably unstable. Like elongating icicles on eaves, a sheet of ice can change shape and flow.  Pine Island’s icebergs are the result of a large ice stream, where ice flows at the relatively fast pace of 1.5 miles per year into the ocean. Pine Island glacier is the world’s largest source of ice to the ocean.  If Superman built his Fortress of Solitude on one year’s worth of Pine Island’s floating ice tables, it would be as big as San Francisco.

When we look at pictures of Antarctica, we see nothing but ice and some surrounding ocean.  This obscures the fact that Antarctica is actually a very dry place—with approximately 10-16 inches of precipitation per year, Antarctica has more in common with Arizona than your favorite ski resort.  The ice stream of the Pine Island Glacier is accelerating, and currently outpaces the ice replaced by the paltry snowfall to the tune of 46 gigatons of mass per year.  This is like pouring ten Lake Michigans into the ocean, which is understandably alarming to both scientists and anyone who owns beachfront property.

The Pine Island Glacier 50 mile ice shelf has fallen under particular scrutiny as a key to understanding the accelerated mass loss.  Autosub’s multifaceted map enables flow to be modeled, the temperature and chemical content give us clues about where and how melting is taking place.

By understanding the current state of glacial acceleration, scientists can predict how the Pine Island Glacier is going to look years down the road, long after the donut-stocked Antarctic hits its prime as an ecotourism destination.

Armed with information about the negative outcomes of human choices on the Antarctic continent, scientists can prevent both ice shelf melting and the requisite tourist-friendly Starbucks from coming to pass.
Run and Tumble
More Articles All Articles
About