Stephanie Pulford
Before the days of mandatory underseat pet carriers, my airline colleagues received a call from a woman who needed to bring her therapy pet, a pig, on a flight. The airline didn’t see a problem, since Vietnamese pot-bellied pigs are about the size of dogs and just as well behaved. However, the animal that the woman showed up with was no potbellied pig. On the day of the flight, the woman showed up with a 300 pound barnyard pig on a leash.  The pig took up the entire aisle, calmly sleeping through the flight.

Perhaps the woman wouldn't have inconvenienced any bathroom-bound passengers and the fire marshall if she'd turned her attention to a different kind of companion. Her digestive tract contained any number of pets that can be taken anywhere, and offered her a number of kind services to boot.

Our cats, dogs, …pigs, provide us with companionship, security, and sometimes services. In return we give them a warm house, food, and in the pig’s case, airfare. We all like this relationship; that’s why your escape artist cat always comes home purring at dinnertime. If we strip away the sentimentality, our relation with our pets is mutualistic— our interaction makes both of our lives better.

We have the same kind of relationship the cuddly inhabitants of our digestive tract. We provide our gut microflora warm home and the meals, and they help us extract energy from food and protect us from less friendly tenants. That’s why a round of antibiotics, meant to knock out parasitic bacteria, can cause digestive issues and yeast infections.

Most of us leave our dogs in a kennel during vacation, and humans can live without their gut bacteria if they had to. But there are plenty of species that take after the woman on the plane—without their pets, they can’t function. A good example of that kind of mutualism is the termite. We know and revile it for its wood-eating ways, but we should really be blaming its protist collection. Without these microbial partners in crime, the termite can’t produce the enzymes to digest cellulose. If the termite and its microbes were separated, both would die. 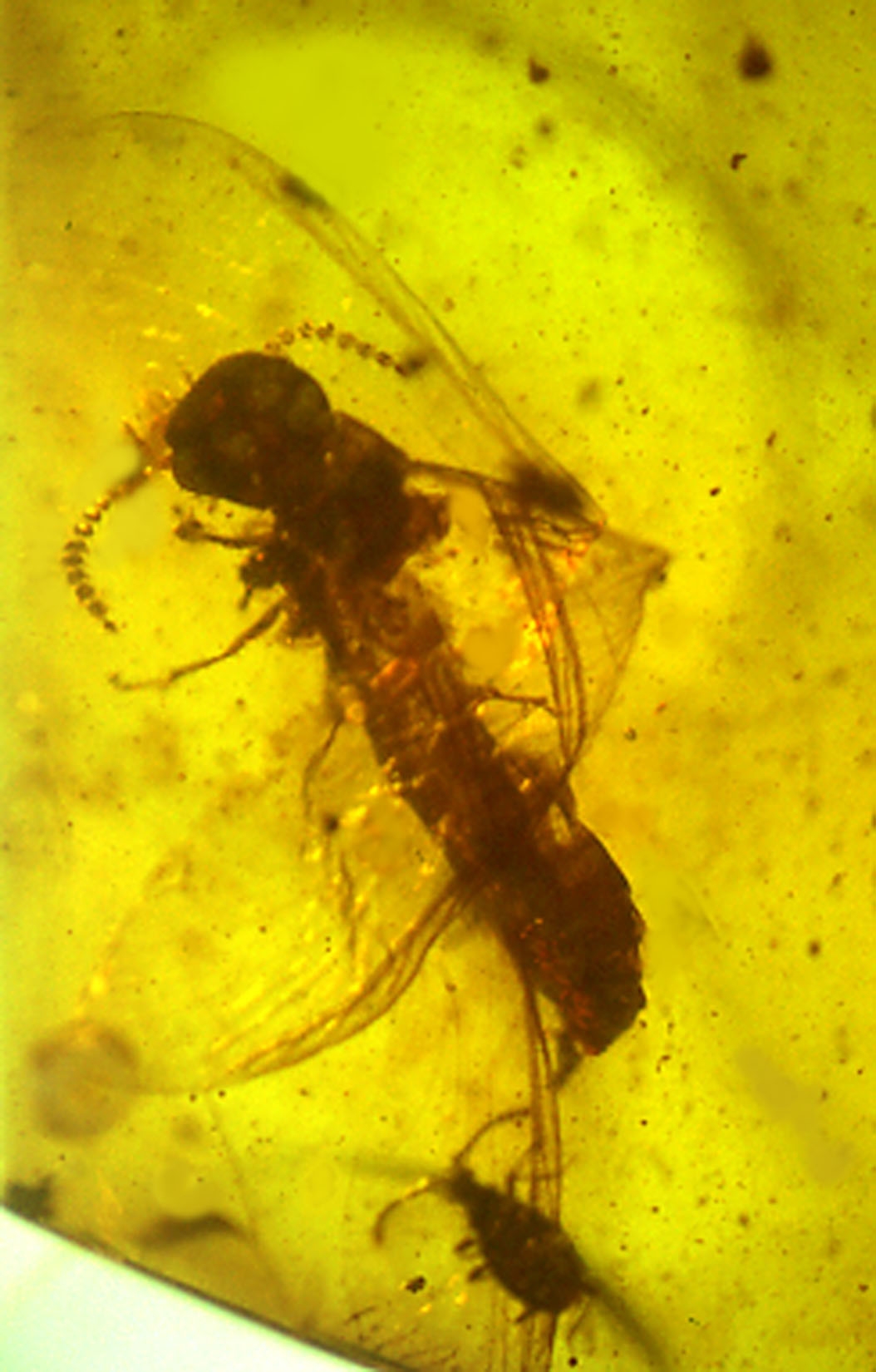 This has been a long friendship. A recent publication in Parasites and Vectors discusses the prize find of a wounded termite preserved in amber, the contents of its abdomen preserved on display since the Cretaceous. Though this dinosaur-era termite may still have been able to subsist on its own, wood-digesting protozoa were found with it that are strikingly similar to a termite’s present-day companions.

Wood-digesting protists are so important to the termite that it has evolved a special behavior to bequeath the bugs to its termite offspring, but it’s hard to describe this behavior elegantly. The fastest way to transfer microbes from one digestive system to another is poop.

The adult termite leaves protist-infused excrement for its young, who eat it and set up an internal colony of their own. In this respect, we humans really aren’t so different from the termites. Though the digestive tract of an infant is sterile, we pass along gut microflora from fecal matter during the process of childbirth.

Passing down microflora is an example of a fascinating feature of mutualistic relationships, which is that cooperative species often co-evolve. To early independent termites, protozoa were probably parasitic; it’s unlikely that parents would deliberately infect their children. But as the protozoa evolved to be a good and useful tenant, the termite became more accommodating as well. Other examples of this include the fig and the short-lived fig wasp, which require each other for survival and reproduction. A more spectacular (if debated) co-evolution is that of the long tongued hawkmouth moth, which is the only known creature that can easily access the nectar of the deep-spurred orchid.

Co-evolution, or at least some mediation in our mutualistic relationships, is an interesting thing to consider as science discovers more about our own complex relationship with our plethora of gut pets. Recently microflora have been linked with obesity. Our intestinal tenants give our digestive system a boost in efficiency that can help us get more out of the food we eat. This can make us more resistant to starvation, but in extreme cases the surplus storage becomes detrimental. Extreme obesity solutions, like gastrointestinal bypass surgery, are associated with a change in microflora as well as the physical path of digestion. Perhaps this suggests that we, like the woman and her pig, might find life a bit easier if we could occasionally leave the pets at home.

Description of an early Cretaceous termite (Isoptera: Kalortermitidae) and its associated intestinal protozoa, with comments on their co-evolution.  GO Poinar.  Parasites&Vectors 2009,

Who controls the crowd?  New findings and old questions about the intestinal microflora.  U Steihoff.  Immunology Letters 2005, 99:1

People, pets, pests, parasites, planes, protists, pigs, and poop: this article was brought to you by the letter P.
Run and Tumble
More Articles All Articles
About