Snarge On The Runway: Birdstrikes, Airplanes And Why We Don't Put Screens In Front Of Engines
By Stephanie Pulford | January 23rd 2009 12:38 PM | Print | E-mail

Stephanie Pulford
Captain Chesley "Sully" Sullenberger's heroic Hudson River landing was a good reminder that a twenty pound bird at 200 miles per hour is not so different from a bowling ball shot from a cannon. The results range from minor dents to Flight 1549's disabled engines to the damage below: double-lapped, 1/16” reinforced aluminum totally blown through, and feathers clear to the cockpit.

I learned of Smithsonian’s interest in birdstrikes three months after working on the one pictured below.  A coworker at USAirways taped an article to my door urging aircraft personnel to report wildlife strikes, because the Smithsonian was finding that the number of birdstrikes was up, Up, UP!  My boss remarked that this spike was likely due to more aviation workers becoming aware that someone did, in fact, want us to send bits of dead bird to their office. 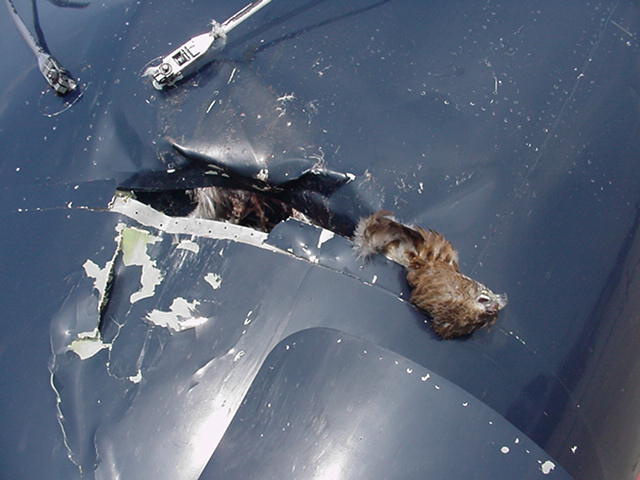 That someone is Carla Dove, director of the Smithsonian’s feather identification lab. When she joined the Smithsonian in 1989, only 300 strikes were reported per year. Today she oversees 4000 birdstrike cases annually.  It’s true that reporting is the dominant cause of this increase; fruitful partnerships with the FAA and the military have netted Dove’s team an opulence of “snarge”, the feathery and squishy organic remains of airplane roadkill. But reporting alone is not responsible for the tenfold increase in bird/plane run-ins.  The rise in birdstrikes is a backhanded triumph for conservation efforts; as waning bird populations start to thrive again, they become more likely to exist in the same space as an aircraft’s jet intake.

The best clue to the relationship between returning populations and birdstrikes lies in the species demographics. Presiding over a vast collection of bird skin, feather, and tissue samples, Dove’s group identifies bird remains by species according to feather morphology and DNA techniques. This allows them to track birdstrikes as an avian epidemic.  Endangered species, such as the young bald eagle in the photo, are starting to command a greater percentage of the remains arriving in the Smithsonian’s mailbox.  With a bit of fishing through the  Embry-Riddle University database of the FAA's birdstrike reports, you can see the evidence yourself.  For example, here in California,  strikes of the recently endangered-delisted Canada Goose are up from 5 to 7 this year-- a small number, but a 40% increase. 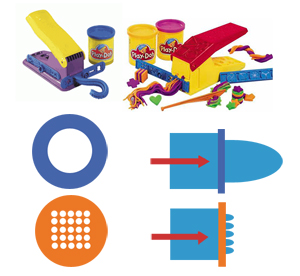 Since the Hudson landing, I’ve been asked repeatedly why aircraft designers don’t put some kind of screen on the front of jet engines to keep birds from being sucked into the turbines.  My guess: a combination of structural and aerodynamic concerns. The task isn’t quite as simple as duct-taping mosquito screen over the jet intake.  If a suicidal bird can dent airplane skin, then it’ll take a really hefty grill to keep a bowling-ball sized goose out of the turbines.

More importantly, dividing a wide opening into an array of small openings has a huge effect on airflow characteristics.  Think of the Play-Doh Fun Factory.  It is lot easier to extrude Play-Doh through the large apertures than the “spaghetti" grid, right? Air behaves in a similar way.  Forcing the flow through a grill means that less air makes it to the engine turbines, causing a cascade of complications—most obviously, the loss of thrust and thus lift.

So, the Canada Goose is back in and the grill is out.  But don’t be alarmed—there is rarely call for Captain Sullenberger’s mad flying skills.  The FAA maintains a thorough and effective mandatory “birdstrike certification” program, which ensures that all United States commercial aircraft receive special structural reinforcement, care, and attention in areas affected by birds.  In lieu of grills, scare lights appear to be quite effective—at least according to companies marketing the systems.

Furthermore, most bird strikes are not dangerous for anyone except the bird. The majority of birdstrikes are discovered on post-flight inspections, and don’t affect the flight in any way.  Considering the thirty-two million flights in the United States every year, your chance of being onboard during even an indetectable birdstrike is less than your chance of  catching the chicken pox, putting an eagle, or watching Hitchcock’s The Birds this year.

The return of the Canada Goose: http://www.smithsonianmag.com/science-nature/Aleutian-Cackling-Goose-Wil...

...And for a macabre good time, Make Your Own Birdstrike Kit! http://safetycenter.navy.mil/aviation/operations/bash/downloads/Smithson...
Run and Tumble
More Articles All Articles
About