The Plenitude Principle says “all possible exists”. According to hype, the Plenitude Principle is the result of quantum mechanics and particular Many Worlds Interpretations (MWI) of quantum physics. However, the Plenitude Principle is self-evident and likely many thousand years old. Pierre Fermat suggested considering ‘parallel worlds’ to Blaise Pascal in 1654 [Devlin 2008]. Such scientific Many Worlds/Minds (MW/M) descriptions facilitated the development of probability theory and were essential in the development of statistical mechanics in the nineteenth century, for example in the work of Boltzmann [Cohen 1997] and Ehrenfest [1912]. These traditional approaches usually described every parallel world as a deterministic universe with each universe in isolation having only one single future. Nevertheless, considering the possible minds leads anyway to a model where each observer branches into all the possible, multiple futures, as we will see. Let me illustrate these different (but dual) descriptions here with the scenario of Alice and Bob each flipping a coin, each observing heads (1) or tails (0): 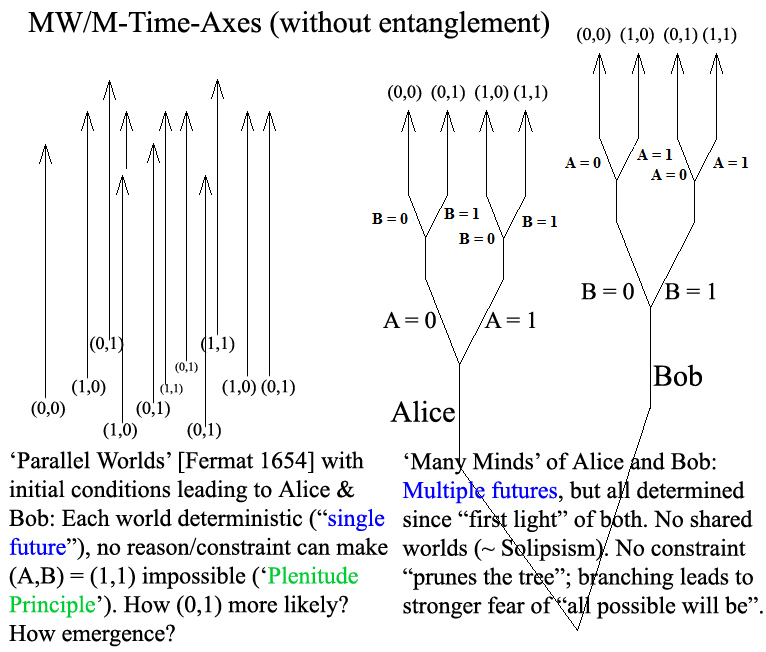 There is nothing yet quantum here, also not the branching in the tree! This is important for understanding that relativity theory follows from self-evident considerations about the fundamental equivalence of all possible minds (the core of the Plenitude Principle), and, since already including relativity between minds, the core of quantum mechanics. “The quantum” is not put in but falls out, without empirical input, as it must. The Theory of Everything (possible) allows all possible observations by definition, so do not make the mistake of demanding possible observations that may falsify the theory. This is fundamental science, not mere empirical science telling us in what kind of parallel world we happen to have found each other.

I now present two self-evident versions of the Plenitude Principle. First the “No-conserved-stuff-in-God’s-only-box” version (note well that my arguments are not requiring atheism - even modest agnostics must accept MW/M if they want to be modest agnostics):

This version addresses a mechanistic, realist worldview. That my present situation, which seems to be “this particular universe right now”, leads to multiple futures seems to violate the conservation of mass or energy (actually, energy is not conserved in cosmology). It is good to pick people up where they are at, so this version, aimed at engineers rather than linguist philosophers, starts with established science: In the physicists’ empirically established, fundamental descriptions, a universe does not exist in some empty three dimensions called “the only space” as if there is therefore no more space for another universe, perhaps on grounds of that our universe is already infinitely large and so there is no space left for another one. Our cosmos produces its own space; space is "in" it not it in space. More generally speaking: If you start with the assumption that our “universe” is something that exists by itself without physics correlating it with other, different universes, then a universe can exist all by itself by assumption, all by itself from its own inside. So, therefore, by assumption, there is nothing that this world could do to stop any other possible alternative world from existing just like this one does, in its own inside, too! And this obviously also applies to all possible initial conditions and all possible gods and their choices when arranging initial conditions or whatever else you can suggest short of stamping on the ground and shouting “The absoluteness of the absolute is that it is just not relative from a next higher meta-level, praise the one and only, you shall have no one beside him!”

This version of the Plenitude Principle as a self-evident fact leads straight to a model like on the left of my illustration, namely worlds “existing in parallel.” The numbers of worlds for each type of world that you may want to distinguish are arbitrary. Why would they resemble the probabilities that observers in the worlds are determined to talk about?

Since fundamentally all possible worlds/minds exist from their own insides precisely as much as any particular one of them, and since having multiple or one of each in a model makes here no difference yet, the many-minds tree on the right of my illustration is a ‘dual description’ of the model on the left (an equivalent description, possibly connected by a formal duality transformation between equivalent descriptions like in string theory). Yes, only the tree seems as if there is branching into multiple futures, but for the observers in the worlds on the left it is the same, because they cannot know in which of the worlds they are (the problem of self-location).

For the tree on the right, it obviously holds that, for example if we start gambling in a casino, we thereby create, with certainty, all futures that branch from this present situation, all futures that can come from this, including those that lose every bet. This is where the Plenitude Principle becomes relevant for ethics [Vongehr 2019] and facilitates Zen-like enlightenment as I started to discuss more strongly in recent articles here. The statement seems to be a bad fit for the model on the left, because each world is a deterministic universe in isolation. However, also with a single deterministic world only, it is still 100% correct to say that the futures include all the futures that branch from it, even if you still believe it is only one future. The statement holds self-evidently, ‘tautologically’, meaning self-evident by definition, by the structure of meaningful, self-consistent language.

Previously, I usually rather discussed a version of the Plenitude Principle which I have called “Tuesday’s Socks Fundamental Indeterminism”, which can be put in form of two statements:

1) The color of my socks on some Tuesday morning is not written in the rock bottom foundation of nature.

The first statement is beyond reasonable doubt anyway, but it is also a formal tautological truth just like the second sentence that follows, since the second one is added so that the “rock bottom foundation” of the first is properly interpreted, namely as a Theory of Everything, not the initial conditions that God gave my universe.

This version is more elegant because it is description theory rather than talking about “universes” – you cannot describe consistently in other ways regardless your universe! Understood in this way, only its first sentence is already sufficient, but I admit that for a novice to such thinking, perhaps the ‘No-conserved-stuff-in-God’s-only-box’ version, the one about fundamental space-time existing in itself rather than finding no place to squeeze in next to us, is necessary for accepting that all possible initial conditions are equivalent, not only philosophically but also in a more mechanistic worldview.

Notice again that also with this tautological version of the Plenitude Principle on one hand and Fermat’s isolated deterministic parallel universes on the other, there is no conflict. It is important to understand that MW/M models are not necessarily quantum, which is why the second statement of “Tuesday’s Socks Fundamental Indeterminism” explicitly mentions deterministic worlds with their initial conditions. You may believe in those if you like; the relevant conclusions are immune to such.

So, concluding for now, for any reasonable person who is able to behold the obvious regardless of how scary it may seem: After rejecting naïve stuff-in-box models of the universe, there is no self-consistent (non-self-contradicting) argument that would make it reasonable to believe that not multiple futures exist, and all possible ones (the Plenitude Principle), even if holding most conceivable futures to be impossible for some as yet unknown reason (e.g. all casinos go bankrupt because the gamblers are so lucky is perhaps strictly impossible).

We have arrived at something very scary, trapped, bound to experience all possible evil, especially since quantum-hype has given us what I call the “Promiscuous Plenitude Principle” – suddenly, according to revolutionary modern science, so we are told, everything one can imagine is supposedly possible because the micro state of such arrangements of particles is allowed by standard quantum mechanics and we may quantum tunnel right into such an arrangement, or better, into all of them at every moment. Having thought further and with experience manipulating geometrical many-world models [Vongehr 2013] that now also describe quantum teleportation well [sadly un-publishable since I am black listed everywhere now], I can help you with this in a few articles soon to follow. I will lead you to the “Pruned Plenitude Principle”, pruning the crazy states from the branches of the many minds tree.

[Vongehr 2019] S. Vongehr: “Many Worlds/Minds Ethics and Argument against Suicide: For Emergencies and Evaluation in Long Term Suicide Prevention and Mental Health Outcome.” In preparation, suggestions for collaboration welcome
Alpha Meme
More Articles All Articles
About