Sascha Vongehr
Many cannot accept that IQ is largely determined by our genes. They do not trust the research. Pointing to such research is an argument from authority. Moreover, the research does not explain the mechanisms in the social realm well, and so the research can anyway only be supporting evidence, but it is alone not convincing and we do have to ask: Can we trust the science?

But it comes worse!

When arguing that genes determine IQ, one is quickly drawn into arguing that education has little effect. This automatically focuses on negative scenarios: You educate, but it has no effect. We easily think of giving a ‘good book’ to a person of low intelligence and subsequently observing failure. And so the whole issue is tainted by negativity and you come across as insulting and discriminating against low IQ people. This is counterproductive, but this emotional background naturally arises very easily in such discourse, and emotions swamp reason.

Sure, you can say “low IQ people are not bad people, and if they do wrong, they at least have an excuse, so if anybody is to blame, it is those that should and pretend to know much better, those educated intelligent people – the very worst have always been among them”. But this has little effect, because almost everybody feels negatively about those of lesser intelligence. All who claim that it is actively insulting to mention the lower average IQ of low IQ races, they all uphold the notion of that low IQ is something bad. Mentioning the high verbal IQ of Ashkenazim Jews is never equally seen to be an insult, although deceit, including self-deception (denial) is strongly facilitated by verbal intelligence.

So, how to argue better?

Recollecting the ways in which I played as a child and the bad magazines instead of “good books” that I devoured as a teenager, it occurred to me that this is simply focusing on the very opposite of “good book lost on a stupid.” However, although these opposite scenarios therefore describe the same underlying mechanisms from different ends of the IQ spectrum, the perhaps most crucial mechanisms become clear, perhaps because now it is not their failure that is central, and this following key sentence sums it all up, why the environment has such a small effect:

It is very hard to stop an intelligent child from learning!

Let us not focus on the negative, on low-IQ children being bored by and destroying expensive educational toys. Let us instead focus on the positive and consider an intelligent child with no toys. You will find that it plays with everything available – every spoon and piece of scrap paper in the house will be used at some point. You can send the child outside into the dirt, but if you go to check on it after a while, the child will play with sticks and mud. You will witness it play all kinds of elaborate games in the dirt, shaping and constructing and naturally learning about mechanics and how fluids behave, ordering armies of twigs into battle, observing how the birds fly in the sky, how the neighbor's cat squints back. You have to literally tie it down in a dark room every day in order to stop an intelligent child from educating itself. 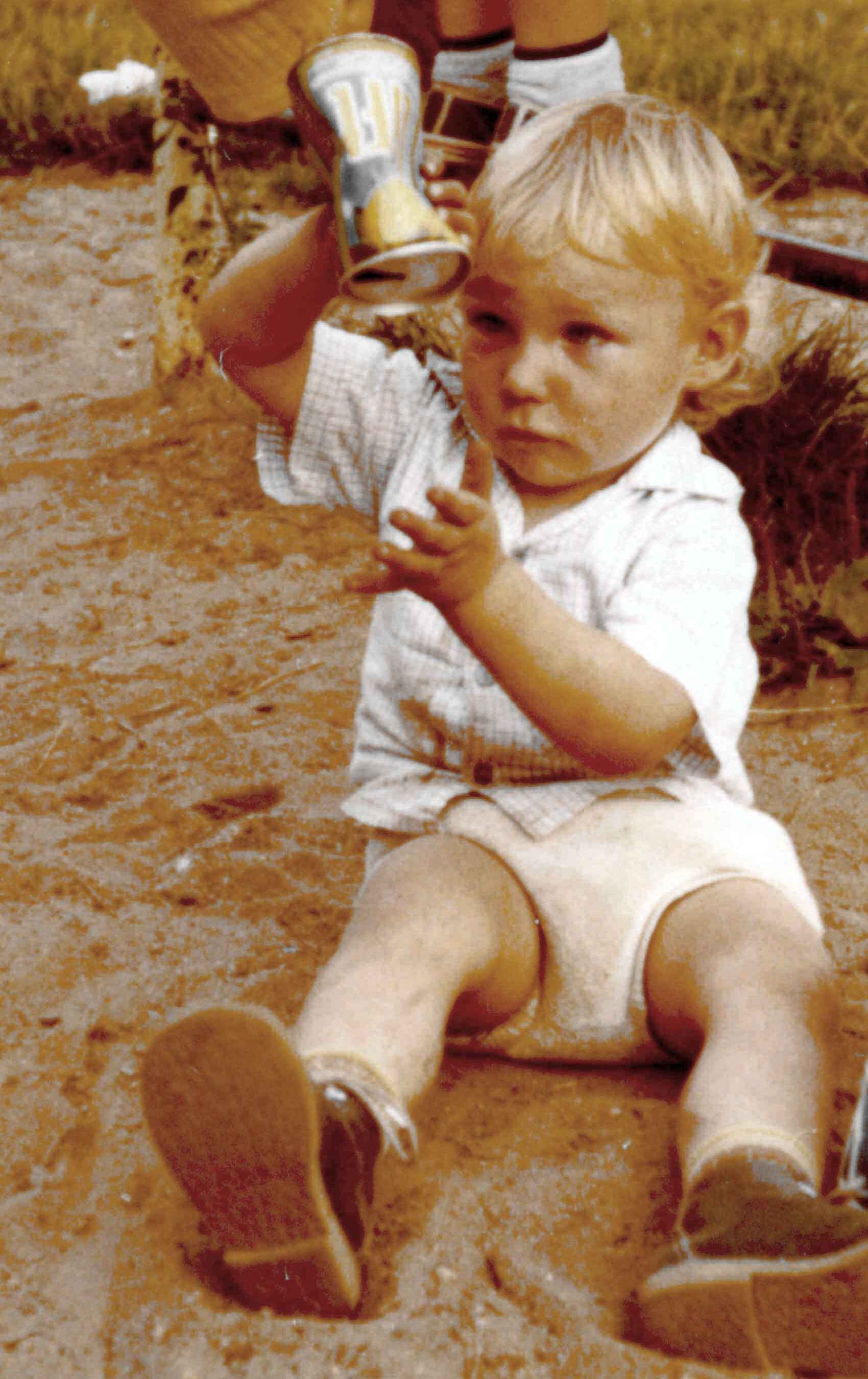 Young Master Feng and his educational toys: My Father once remarked to this photograph that already then one could see the scientist.

This no longer sounds like the argument of a bigot. Bitter bigots curse the bad influence of tabloid magazines. I did not read educational books written for teenagers. Before I discovered the public library rather late, I devoured for example the silly women magazines my grandmas and aunts had lying around. I learned a lot from reading such garbage, about psychology, what women and men like to read, how the writers write so that people buy such magazines, what pictures they use, how stuff is arranged, and so much more. These magazines may have stupefied those who bought them, but I used them to educate myself about reality. So remember this sentence, because it triggers the correct argumentation:

It is very hard to stop an intelligent child from learning!

The more intelligent somebody is, the more this person self-educates naturally anyway. It is not just so that formal education has only little success with the stupid. It does not have close to as much of an effect as we usually believe on the intelligent either. It simply does not have as much of an effect as we desire to believe. And with this, we arrive at another aspect that may be worth mentioning during such discussions: We all want to believe that we are not much determined by our genes, and parents and school and basically everything in society wants us to believe that education is important, that we should study the material given to us.

If I want to sell something to you, you should be suspicious about my claiming how marvelous that thing is. If I exclaim that something is really good but I do not give it to you, and then you demand it but I still don’t give it to you, then I likely have indeed something really good. However, if I advertise that it is all great while pressuring you to take it, it is likely not as good as I try letting you believe – perhaps it is bad. "Truths" that our own brains are evolved to sell to us should be regarded with utmost suspicion.
Alpha Meme
More Articles All Articles
About