Project Calliope
For our Calliope picosatellite mission, I want to make it a real space experience.  That means it needs a mission patch.  And first, let me thank you all-- our fans and community-- for ensuring our Kickstarter fundraiser made its goals!  With less than 11 hours left, we hit our target figure!  Woo!  You're all awesome!

Mission patches were first seen at NASA in 1965. But early manned NASA missions lacked such patches and instead, the astronauts gave their spacecraft names. Alan Shepard's capsule for Mercury 3 was named Freedom 7. When Gus Grissom proposed to name his Gemini 3 capsule Molly Brown (which was a reference to The Unsinkable Molly Brown, referring in turn to Grissom's Mercury 4 capsule, which sank in the ocean shortly after splashdown, NASA officials abolished the practice of naming capsules.

Astronaut Gordon Cooper then proposed to develop a mission patch for his and Pete Conrad's Gemini 5 flight. The original design had the names of the 2 crew members, a covered wagon and the title "8 Days or Bust", which referred to the duration of the expected mission. NASA administrator Webb approved the design but wanted the slogan to be removed.  Since Gemini 5 patches have been created for all NASA manned missions and many unmanned missions.

Obviously you aren't a real space mission without a mission patch.  For Calliope, we started by asking random children (plus myself) in the house to come up with logo concepts.  I would recommend other projects consider do a more formal contest to expand their range of ideas, but tapping your in-house team to brainstorm ideas is a tried and true technique as well.

From this, we chose the coolest 2 and shipped them to a graphic designer for an estimate on using them for a pin and a patch.  I used a local designer named Carla Aguiar, who did some work I liked back in my RPG industry days.  Below is the design she worked from. 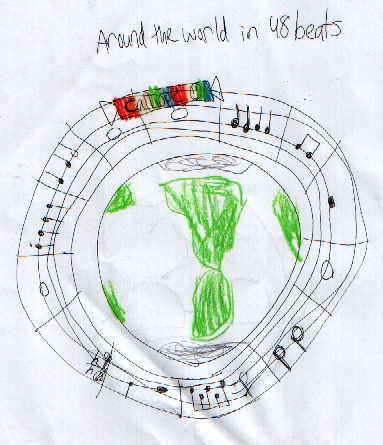 Carla describes herself as a "freelance graphic designer of brochures, stationary, newsletters, anything on paper, seeks projects to challenge her ten years of fast-paced, high-pressure experience".  If any of you want her contact info, email me or post here and I'll send it to you.  I'd highly recommend her.

She estimated the project as two to three hours, depending on how many revisions were needed.  I booked her at a flat fee based on three hours. I prefer flat fees because they're easier to budget and schedule, and because then both designer and customer can focus on The Work, not the Hours.  The customer doesn't have to worry whether each email or edit is 'on the clock', and the designer can structure the time around their own schedule and decide the level of effort.  It requires good communication, but any graphic arts job requires good communication to succeed in any case.

I also supplied Carla with two TubeSat illustrations, and later fetched some WorldWind images, which are free to reuse for commercial purposes.  Not being in a hurry, communication happened on a scale of days rather than hours-- I frequently would take 1-3 days before replying on a issue (depending on how busy I was).  The entire process, from initial query to sign off on invoice, took just under 1 month (Jan 19th to Feb 16th), It involved 14 email exchanges, of which 4 were to agree to initial project specs and terms, and 4 were to close things out and handle invoicing.

We went through several discussions and drafts before settling on the final form.  Carla typically would provide 2 initial variants, then we'd hone down to what the final would be.  At the close of this contract

, she produced the final high quality artwork (in EPS and PDF formats) for both the pin and patch.  The pin design was so nice, I've ended up using it as the Project Calliope logo as well.

I liked one of her variant patch designs and, since the original contract was for 1 pin and 1 patch, offered to pay an additional hour of time for rights to use the 2nd patch as well.  The final patch designs are shown here. 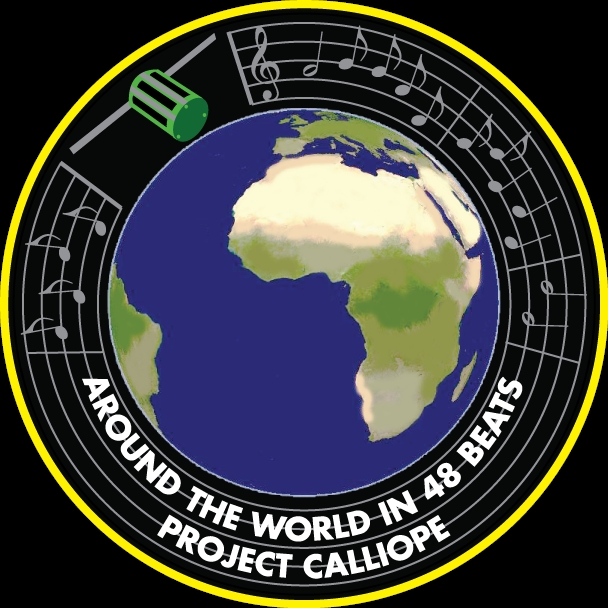 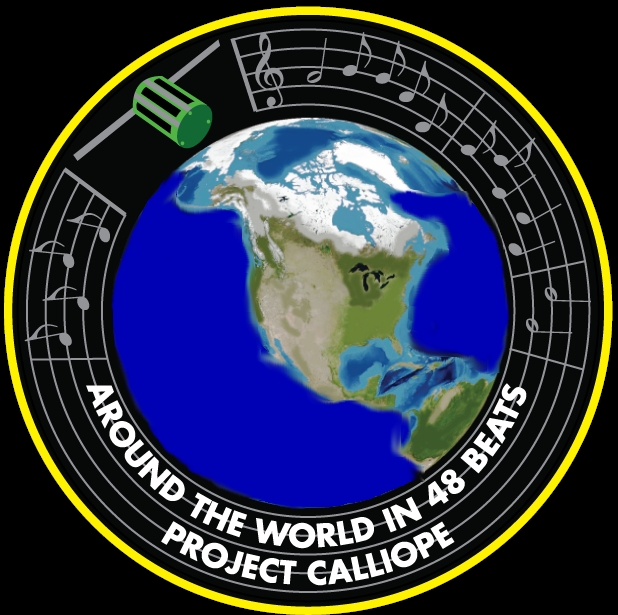 Then comes actually producing the patch.  Similar to my PCB fabricators comparison, my criteria were:
On price, all were roughly equivalent, so that was not a significant discriminator.  The biggest problem I ran into was that many online vendors were, basically, talky.  They want you to submit the design for a quote, then they send you 2 emails plus phone you to follow up, then they give you the cost estimate, then they say they're sending it off to graphic design, then they email you it has too many colors and you need a different format, et cetera.  One failed utterly, in that they started talking to me about the need for an outline proof and that they couldn't do the job.  Rather than inform me of either what they could do, or what I needed to do, they basically shut the door.  Go figure.  I did not want talky, I wanted "here is what we can do.  If you like it, order it."

Two patch places met that criteria.  Since I have 2 patches and this is a learning experiment, I went with both of them, one for each patch.  The first to impress me was Butler Patches.  They didn't talk lots of useless words, instead they delivered.  Their response to the query was to send out a proof of how they would tackle it, including the % embroidery required (75%; that affects the price) and what the color breakout required is.  Their proof sheet is referenced below. 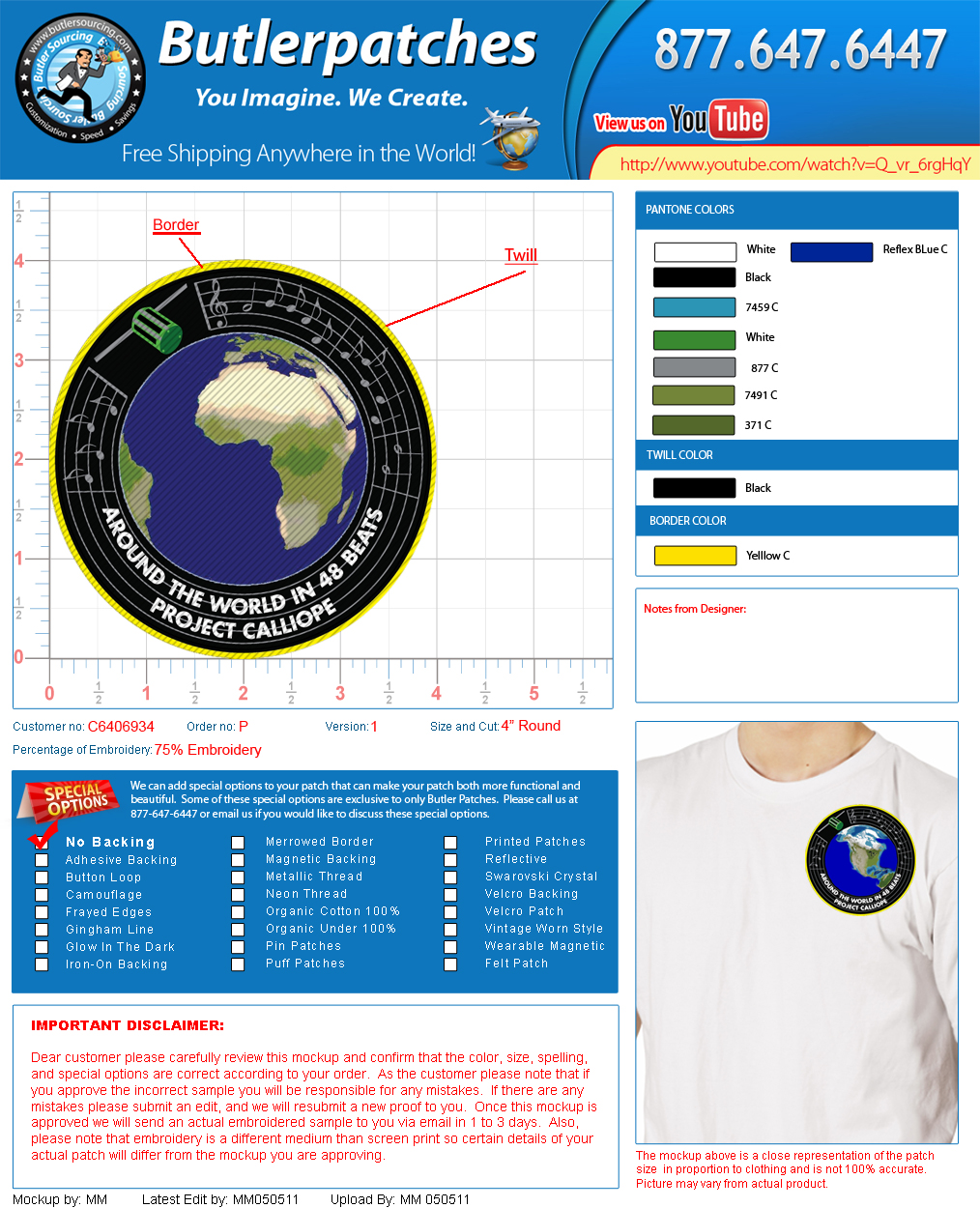 THAT tech sheet really says it all.  The second vendor I am working with is Union Patches, because any good product testing requires at least 2 vendors seen through to completion.  That is still in progress-- on Saturday I gave the go-ahead to produce a proof, and am waiting for it to arrive.  Most patch places have a 1-3 day turnaround between "here is our price" and "here is a proof".   Butler Patches impressed me by going right to the proof stage, which is why they snared my business.  With Union, I'll update you on how that comes out when I do the followup-- after the patches are delivered and I have one of each in hand.  I will also be writing about how to order flight pins, in a fashion similar to patches, once that saga is completed.

I highly recommend any amateur space project look into cool mission swag.  It's a great way to celebrate the fact that we're in a new space age, an era of commercial space where (as I often say) "any idiot can launch a satellite, and I'm here to prove it."