Hank Campbell
Artificial hearts were invented at a time when progress in science couldn't come fast enough. In 1969, when they first went into human use, DDT hadn't been banned, vaccines were considered the medical highlight of the century, and the Green Revolution promoted genetic modification as the way to feed the world's poor in the future.

In 2014, the cultural landscape is much different. An alarming subset of the American public thinks food can be chemical-free if they pay extra for it, vaccines are only for poor people in red states, and a Bt protein leads to Frankenfood while Bt spray leads to an organic sticker. Artificial hearts would have a difficult time if they were invented now, there would be talk that Frankenhearts turn people into robots because our ancient ancestors did not have artificial hearts.

The genesis of the technology is intriguing, like something out of Macgyver. 15 years prior to creating an artificial heart, Dr. Willem Johan ''Pim' Kolff built a rotating drum kidney out of aluminum from a wrecked German fighter plane (he was in Holland, there were a lot of those by 1942), a 1937 Ford Model T water pump, an enamel tank (not the World War II kind) and 40 meters of cellophane normally used as artificial sausage skin. 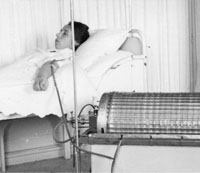 That success eventually got him a job in...Cleveland...and things took off from there. In 1957, Kolff and Dr. Tetsuzo Akutsu created an artificial heart that kept a dog alive for 90 minutes. 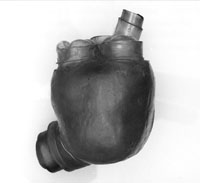 In 1969, 6 years after the first artificial heart was patented by a ventriloquist (no, seriously - it was Paul Winchell, and helping him was Dr. Henry Heimlich, who later became famous for his "hug" that has saved millions of choking victims) an artificial heart designed by Dr. Domingo Liotta was placed in a human by Dr. Denton Cooley at the Texas Heart Institute. The patient lives on the artificial heart for 64 hours but ironically dies 32 hours after a real heart transplant.

From 1969 until now, there have been 1,413 artificial hearts implanted in heart failure patients.  Two years prior to that, we got heart transplants, and in the future we will have hearts grown from our own adult stem cells, with no immunosuppressive drugs or waiting lists or donor stickers on driver licenses. But that is still a way off.

Until then, here are 5 reasons why artificial hearts matter.

1. Demand for heart replacement exceeds supply. People are fatter and that means more cardiovascular diseases and heart failure. According to the U.S. Department of Health&Human Services, there are 4,000 people waiting for a donor heart transplant on any given day but only about 2,300 donor hearts annually - that number is unlikely to go up, it has been flat for the last 20 years.

The numbers in Europe are similar. The European Commission's Department of Health and Consumers says there were 2,004 transplants in 2012 but 3,400 people on waiting lists.

2. 96% of artificial hearts are the same brand. Since 1969, there have been 13 different designs but 96% of the 1,400+ are the same one - When it comes to medicine, there is safety in numbers, that is how medicine became medicine and Shamanistic potions and supplements remain the province of the National Center for Complementary&Alternative Medicine. A manufacturer named SynCardia accounts for 1,352 of all artificial hearts and nearly 500 have been implanted since 2010.

3. They actually last a long time. Artificial hearts were meant to be a temporary stop-gap until a replacement could be obtained, but sometimes the wait for a transplants can be longer than expected. One third of recipients have them for more than a year and one patient had his for almost four years before getting a transplant. One fellow hiked 600 miles with his artificial heart and one has run a race. I won't even drive 600 miles with my real heart so hiking with a mechanical heart is pretty impressive.

4. They're reliable. The overall numbers of artificial hearts is small but because they are primarily one manufacturer over a period of decades, statistics are reasonably valid. In the last three decades of use, the valves have never failed and the diaphragm, responsible for pumping blood in and out of each ventricle, has a reliability rate over 99%.

5. They may soon be for kids. Hearts need to fit properly and that has meant that technology needed to improve before artificial hearts could be used in smaller men, many women, and kids. SynCardia is working with the FDA to launch clinical trials of a smaller 50 cc artificial heart that would work for pediatric patients.