I’ll be honest, I like Equal. If I had my way, my morning would consist of a kiss from my wife and a cup of Double Black Diamond Extra Bold coffee with a packet of Equal and a little bit of French Vanilla creamer thrown in. Super bold coffee with sweetness added? I like contrasts.

What’s even more of a contrast, and more confusing to people who know me, is that someone who won’t eat store-bought jelly - doesn't even want it in the house - someone who would, given his way, never let his family eat anything that wasn’t grown, killed, processed and cooked by anyone but him, would consume an “artificial” sweetener at all.

The reason is simple. They’re all artificial to anyone who understands science. We started doing RNA interference (RNAi) in 8,000 B.C., we just we do it a lot better today. Ancient man created the first domestic versions of the food we now use, by artificially selecting for traits they wanted, like larger fruits or sweeter taste. More sugar.

“Artificial” is everything we eat. Its perception as a modern detriment has been manufactured by groups who want to create "panic in the pantry." This fabricated scale of wholesomeness goes:

But there isn’t anything natural about bleached white table sugar, or even sugar cane, and no marketing effort by Whole Foods to rename sugar “evaporated cane juice” will change what it is. To science, the real line between a natural and artificial sweetener is this: The former will make you fat while the latter will not. That science has been settled. 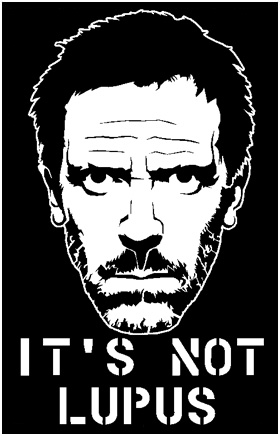 “It’s not lupus” had made appearances in television ("Seinfeld" in 1991, for example) but it became a cultural trope thanks to the TV show House, M.D. Lupus is a great non-specific disease because everyone has different symptoms, so it ended up being posited as an underlying disease for lots of symptoms.

Well, before young doctors under the tutelage of Dr. House or George Costanza blamed Lupus for a lot of things, people were blaming aspartame. Aspartame was even implicated in causing lupus, along with multiple sclerosis, depression and memory loss.

Fear merchants wrote their own tales, claiming “aspartame’s approval was one of the most contested in FDA history,” whereas the truth according to the agency itself, was that aspartame was “one of the most thoroughly tested and studied food additives the agency has ever approved” and its safety is “clear cut.”

Yet claims to the contrary continue to crop up. At the American Council on Science and Health, we recently shed light on the issue again, producing a simple document and a video and articles to accompany it.

We do things like that to separate health threats from health scares. Scary-sounding claims about methanol in aspartame, for example, evaporate quickly when people people realize that diet soda has about half the methanol that is in a banana - and that you would need over 7,000 packets of aspartame at once to get a dangerous level of methanol.

I wrote an article about misrepresentations of dosage and effect levels called 10,000 Shots Of Scotch And Why I Don’t Fear Pesticides, in which I debunked claims about “toxicity” from groups like Natural Resources Defense Council, by showing that they’re meaningless and out of context. If someone works at NRDC, their job is to write a press release saying “Chemical X in Scotch Can Kill You,” and then Mother Jones will rewrite it, and then fundraisers go raise money to save us all from Chemical X. But if the science instead shows that you have to drink 10,000 shots of Scotch all at once — an impossibility — that is not going to scare anyone.

Likewise, the reality that you need to drink 2,000 cans of diet soda at once to get any effect — all in less than two minutes — or nothing happens, is terrible for fundraising. No amount of fantastic “bioaccumulaton” claims can make a difference in that.

Here is the only important fact versus the hyperbolic claims about aspartame and health: There’s a correlation between sugar consumption and health problems. There’s no link between artificial sweeteners and health.

Yet, if you read the site of famed homeopath and fear merchant, Dr. Joe Mercola, he will insist aspartame is causing cancer and that scientists are on the take from Big Artificial Sweetener Corporation or whatever, all while you read ads for the supplements and products from corporations he is selling.

Mercola will promote his products as alternatives to scary science “at the drop of a rat,” without ever telling his audience that rats are not humans, and that randomized controlled trials have yet to detect neurophysiological, behavioral or neuropsychological effects caused by aspartame.

In its race to close their marketing chasm with Coca-Cola, soda maker Pepsi-Cola announced that that they were removing aspartame, due to supposed customer concerns about ”health.” That was a mistake right out of the Chipotle Marketing School of Thought (where the burrito company removed soybean oil made using GMOs, but failed to mention that all of the cheese, meat and soda was produced using GMOs. Now they are being sued for deceptive advertising.)

Instead of being assured, Pepsi discovered its customers didn’t want aspartame gone at all, and now it’s forced to sell two versions of their diet soda. And if aspartame is considered to be harmful by its customers, how will Pepsi assure them that the same science is right about other artificial sweeteners?

The answers are: (1) they can’t; (2) they were just looking for a competitive advantage; and (3) they were trying to ride the newest wave of aspartame hysteria. But that is not a solid marketing plan because food fads are always happening. Pepsi will probably create edible packaging next.

Meanwhile, Joe Mercola will insist that all modern products are dangerous — unless he makes money selling them on his website.