“I saw a werewolf with a Chinese menu in his hand,

Walkin' through the streets of Soho in the rain,

He was lookin' for the place called Lee Ho Fooks,

Gonna get a big dish of beef chow mein.”

" I saw Joe Mercola with the New York Times in his hand,

Looking for some way to explain,

That despite everything he’s said,

There ain't nothin' wrong with As-Par-Tame. 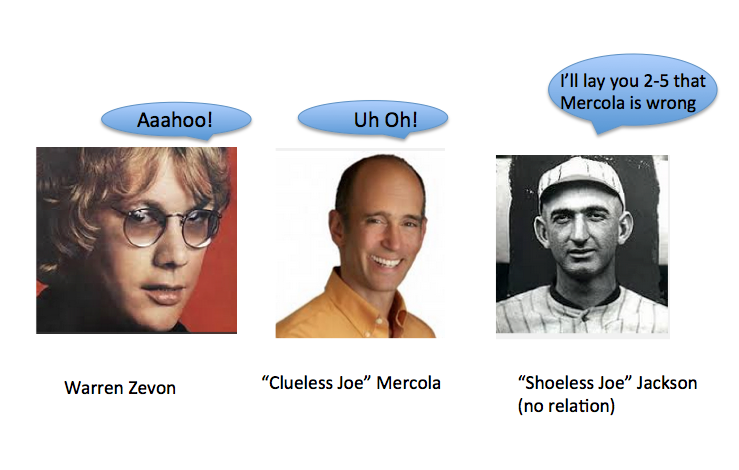 I've been writing about artificial sweeteners, especially aspartame (NutraSweet) for years. Why?

Well, the same reason that I write anything—to cut through the crap. And if you want to find more crap, you'd better get yourself tickets to a political debate.

Another reason I write about aspartame is because I use it myself. Why? I happen to like the taste. And because I want to limit my caloric intake by ingesting less sugar. And it's perfectly safe. With more than 25 years of chemistry, biochemistry, toxicology, and other fields that are related to pharmacology under my belt, I sort of know what I'm talking about.

Every one of those areas of expertise tells me the same thing: Aspartame is not bad for me. Otherwise, I wouldn't use it. I am not alone.

Today, The New York Times caught up with the times. Writing in the paper's "The Upshot" feature, Dr. Aaron E. Carroll, a professor of pediatrics at Indiana University School of Medicine, cuts through all the junk. The article, entitled “The Evidence Supports Artificial Sweeteners Over Sugar,” makes it very clear that all the nonsense over aspartame is just that—nonsense:

“In the last few years, I've watched a continuing battle among my friends about which is worse for you: artificial sweeteners or sugar. Unless you want to forgo all beverages that are sweet, you're going to run into one of these. Rather than rely on anecdote or myth, we can inform this debate with research."

"The available evidence points to the fact that there appears to be a correlation between sugar consumption and health problems; none can be detected with artificial sweeteners.”

Carroll explains that it was bad science that got artificial sweeteners thrown into the wrong box. This is hardly surprising.

For example, a 2004 review that was published in The Annals of Oncology examined claims about artificial sweeteners. Included were 50 studies that formed the basis of the saccharin cancer scare, which started in the 1980's. The study’s conclusion was that the problem was in the studies, rather than the saccharin:

“Saccharin induces bladder cancer in rats, when fed in high doses. However, rodents react to most sodium salts, such as sodium ascorbate, with urothel [related to the urinary tract] proliferation and neoplasia of the bladder.”

What does this mean? Almost all toxicity and carcinogenicity studies are done with Sprague-Dawley rats. But, this breed is a notoriously poor model for prediction of cancer in humans. The rats are prone to develop tumors spontaneously, and also upon challenge with a variety of substances, such as vitamin C and common sodium salts. Is it the saccharin that is the problem? No—it’s the rat model.

Aspartame got an even “cleaner bill of health.”

Carrol explains: “A 1998 randomized controlled trial could detect no neuropsychologic, neurophysiologic or behavioral effects caused by aspartame. Even a dose at 10 times the normal consumption had no effect on children with attention deficit disorder. A safety review from 2007, published in Critical Reviews in Toxicology, found that aspartame had been studied extensively and that the evidence showed that it was safe.”

Yet, Clueless Joe calls aspartame "By far the most dangerous substance added to most foods today,” which sort of calls into question his judgment about other medical matters. Maybe even his choice of restaurants.

I’ve had some things to say about this in the past. See: “Crazy Joe Vs. Aspartame: Who Wins?” (Confession: Yes, I’ve used two different nicknames for the good doctor, but since we are now in the baseball season, the latest seemed right.)

Let's finish up from the perspective of a chemist. Why is aspartame not going to harm you?

First, here is what the stuff is made from (and also breaks down to): 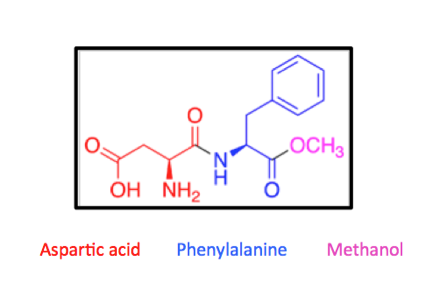 Aspartic acid and phenylalanine are two of the 20 amino acids that make up protein. Every time you eat protein, it is broken down to the individual amino acids in your stomach—just like aspartame. The methanol portion of the molecule is where most of the scares arise, but this is also nonsense.

Methanol is toxic, but to die from it, you have to drink about 30 mL. To get this much, you would have to eat 2,000 packets of aspartame at once. I like the stuff, but not *that* much. Another knock on methanol is that it is rapidly converted to formaldehyde, which is also toxic at high doses. Not only will you have to buy all the NutraSweet in Costco to get this much, it doesn't stick around long. Formaldehyde in the blood has a half-life of about five minutes. It is converted to formic acid, which is rapidly excreted in the urine. It does not build up in your body. Quite the opposite.

Perhaps the most convincing evidence that aspartame won't hurt you is that you are already consuming the three breakdown products, and in amounts that are higher than anything you'll get in a Diet Coke. The table below makes this pretty clear.

If you are really concerned about aspartame, lay off the milk. It has about ten-times of both phenylalanine and aspartic acids, two of the "excitatory" amino acids that scaremongers claim will screw up your neurochemistry. If the methanol concerns you, say goodbye to bananas and especially tomato juice. Shouldn't be hard. That stuff is vile.

Which makes the following decision not as straight forward as you might think: 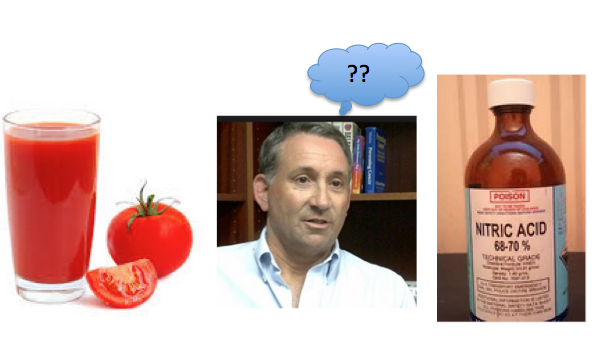 Maybe some of this hysteria will finally go away now. This would be a good sign of The Times.