All through the month of March, from 11:57 PM to midnight, visitors in Times Square can see artist Marco Brambilla's vision of Apollo 18, the mission that never was.

We may sometimes think science is in the doldrums today - young people nostalgically believe the 1960s and 1970s were some kind of Golden Age of Space Exploration - but things are much better now. Between 1965 and 1975 the budget for NASA was cut in half.(1)

By 1970, the justification for more Apollo missions - the Apollo Applications Program, for example, to do science in space - was a non-starter due to high cost.  Nixon's predecessor, Lyndon Johnson, had created new Medicare and War on Poverty programs to great fanfare but The Great Society was expensive. And we were still fighting a war begun by him and Kennedy. The government had already spent over $20 billion, $110 billion in today's money, and had already begun to scale back.(2) 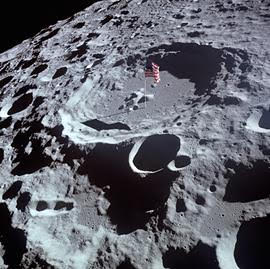 Apollo 18 by Marco Brambilla.  Image courtesy of the artist.

Yet the goal of the whole space program had always been to become about science and engineering rather than adventure. Because of budget constraints and a desire to stay on target with pared-down projects like Skylab and the Space Shuttle, later moon landings were canceled. Apollo 18, which was to have landed at Schröter's Valley in February 1972 and then revised to visit Gassendi crater in July of 1973, was not to be at all.(3)

Now it gets a chance to shine, thanks to Brambilla and his Apollo XVIII video.

(1) Even in 1969, the year we landed on the moon, there was zero public support for a mission to Mars. Assuming that the next President does not do to Obama what Obama did to Bush and scuttle the latest program to replace it with something that has his name on it, we could finally go to Mars, even though no one is sure why we should, since a cute robot seems to have things under control there.

(2) No one outside 49 astronauts really believed it was necessary to keep going to the moon, and many doubted that NASA could pull off a laboratory in the sky much less the LESA (Lunar Exploration System for Apollo) lunar base. In 1966 Astronautics and Aeronautics columnist Henry Simmons called the Apollo Applications Program "Wednesday's child, full of woe" And James Webb, the NASA administrator, agreed that it was a bold vision, but too expensive for only a 50 percent confidence level project.

Webb would be aghast at the telescope that bears his name, which might be 8 years and $5 billion over budget, if it meets the latest projections. It has. however, achieved a distinction no other space program could - it has become too big to fail.

(3) There were so many missions planned that Deke Slayton, Director of Flight Crew Operations, had a rotating system for crews - the backup for one mission would be the prime crew three missions later. Neil Armstrong ran Apollo 11 by virtue of being Commander Frank Borman's backup in the Apollo 8 mission. The only change from the Apollo 8 backup becoming the Apollo 11 prime crew was that Michael Collins, who could not go on Apollo 8 because of back surgery, replaced Buzz Aldrin as command module pilot while Aldrin took Fred Haise's spot as lunar module pilot and Haise was once again a backup. Haise finally got his chance to go to the moon on Apollo 13 - which was aborted due to spacecraft failure.

Given Deke's system, it is assumed that the Apollo 15 backup crew Richard F. "Dick" Gordon Jr., Vance D. Brand and Harrison Schmitt would have been the prime crew for Apollo 18. When Apollo 18 was canceled, things were reconfigured so that Schmitt, a geologist who had become an astronaut in NASA Group 4 (The Scientists) in 1965, could go. He replaced Joe Engle, who was given his choice of the next mission and chose the space shuttle. Schmitt became the only scientist to walk on the moon.