Hank Campbell
I like to use the Sneetches With Stars analogy (I did so again two days ago) because Theodor Seuss Geisel, famously known as Dr. Seuss, was spot on with the idea that humans would find a reason to be different from one another. In the Sneetch community, when one group had a star, they were superior, and eventually a savvy businessman came along and found a way to give everyone stars (which was delightfully both capitalism and communism, kind of like Science 2.0 is) and then, as predicted, when everyone now had a star the group who originally had stars but had claimed it was just nature that they were superior, bought star removal for themselves. Sneetch escalation occurred to hilarious effect.

So it goes with the modern-day Sneetches of Food. When everyone began demanding the removal of a growth hormone from chickens, even though chicken sold in the last 60 years did not have that hormone, manufacturers dutifully noted on the package that they lacked the hormone Whole Foods shoppers were going on about - and so conventional chicken growers got the same Sneetch star organic had, though nothing about chicken had changed.

Then Sneetches of Food needed other stars so they switched to creating a desire for "free range" chickens - consumers didn't realize that means access to the 'outdoors' for 5 minutes per day, instead people who wanted to pay double for chicken and eggs truly believed the eggs and the meat tasted better. Suddenly a lot more people had that star too, so Sneetches of Food switched to free-range chicken raised on organic food, then vegetarian organic food. Suddenly Food Sneetches were all about accumulating stars and seemed to have forgotten about the food.

Well, it was never about the food, it was about self-identification. 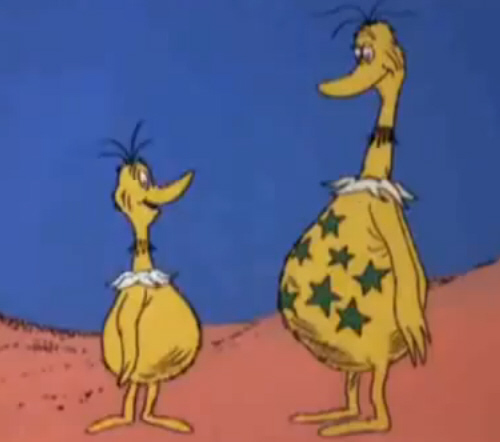 "How can I get all those stars?" "Start by being a wealthy elite and drive to a
Whole Foods..." Credit: Dr. Seuss Enterprises

There is just one problem for people who want to self-identify as consuming range-free, hormone-free, organic vegetarian-fed poultry - they also have to self-identify as animal abusers because vegetarian food for a chicken is animal cruelty. The only way to force a chicken to be vegetarian is to prevent it from going outside at all, which means they are not free-range. If they can find a bug or even a small animal, they will eat it in a second.  There are no vegetarian chickens in the natural world.

Chickens are descended from dinosaurs - not the likable giant herbivores, either, but rather the mean kind in "Jurassic Park" that will eat you in a second. A vegetarian chicken is in defiance of nature and animals do not have a higher-order understanding of why Whole Foods shoppers hate nature, so they react poorly to having a vegetarian diet. They will eat each other, which means that free-range organic, vegetarian chickens who are going to stay that way without violence must have their beaks chopped off to prevent a henhouse massacre.

Even the residents of Portland haven't figured out how to make actual free-range vegetarian chickens. They may convince themselves that if they don't see a chicken eating meat it didn't happen. And stores may convince you to buy a big vegetarian star for your belly, but it is just an intellectual placebo that matches food beliefs. Poor people who lack the money to pay $15 for a dozen eggs are getting eggs that are in no way any different. The same goes for the chicken. Whether it got to go 'outside' for 5 minutes a day to qualify as free-range is irrelevant to the meat.

Who is the only person really happy after everyone runs out of money and all they have left is ever more specific stars of self-identification?

The guy selling the stars. 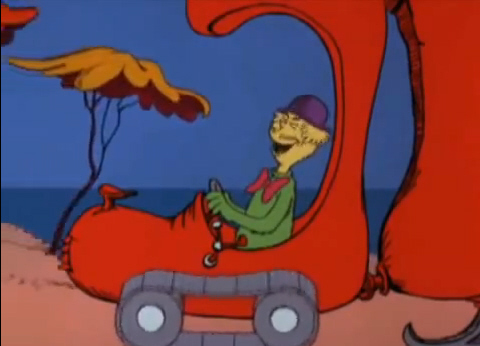