Dr. Squatch: Soap For Dudes Who Grew Beards To Seem Manly While Agonizing Over Which Organic Hand Cream To Buy
By Hank Campbell | September 3rd 2019 03:00 AM | Print | E-mail

Hank Campbell
Urban beards are all the rage this decade, often worn by men in Euroweenie tight suits who want to hearken back to older times, when men were manly and not afraid of science.

Not so today. If you wear a beard now, it means you want to look masculine while virtue signaling that removing certain chemicals in soap will prevent your erectile dysfunction.

In reality, such men probably needn't worry, women are swiping left because most don't want to date someone who looks ready for a Civil War re-enactment but they suspect has a bathroom filled with vegan skin care goop.

Yet this is America so there is a free market for just about everything and for the chemophobic bearded hipster doofus market there is Dr. Squatch soap, which is Dr. Bronner's Magic Soap for people who don't hate vaccines (1) but are still wealthy elites and can afford to spend 500% more than they'd spend on Dove.

And groom their chest hair while leaving their facial hair strategically unkempt.

The 1980s had Sensitive New Age Guys, but this decade has dudes who grow beards so they can look more masculine while they lather up other dudes. I hope someone at NPR comes up with a term for these mutual lathering bearded men soon, because that description took way too long to write. 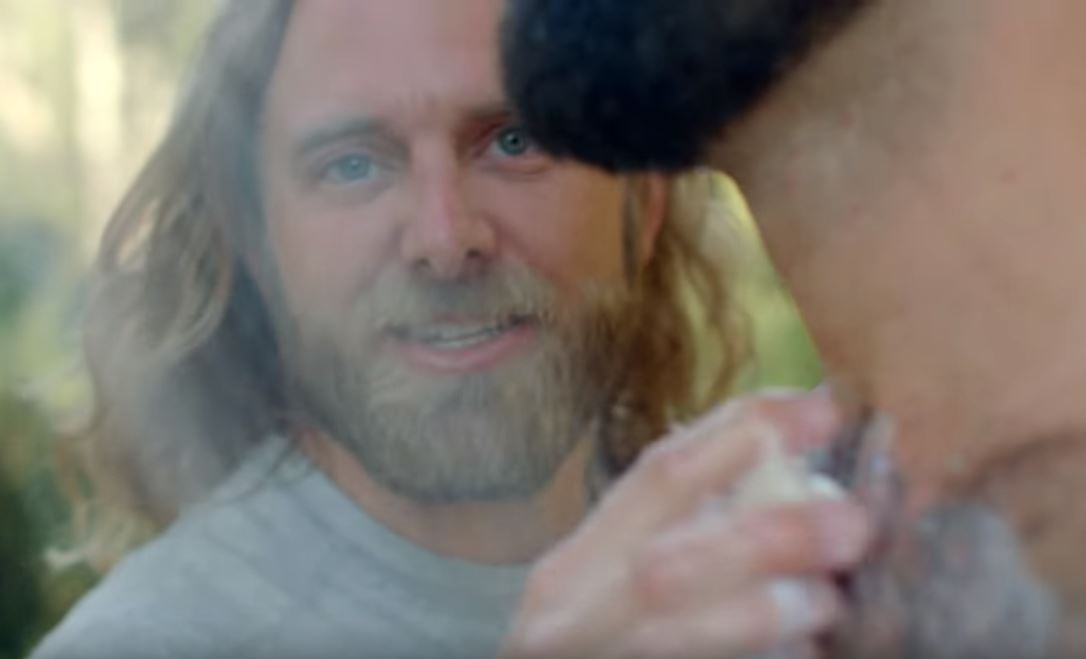 They do get one thing right in the video. The boom in mass-produced store-bought soap took off after World War I. And that is because World War I caused America to realize what Europe already knew and was afraid we would learn; we were a superpower. When Black Jack Pershing went to the Allied front line in 1918 with just two divisions of American soldiers, the German army that had already made Lenin's Russia capitulate (giving Germany a third of her productive land and people as terms of surrender) and had just caused entire British Corps to disintegrate during a recent 40 mile advance figured they would also make short work of the upstart Yanks, but it was not to be. They were stopped cold. And then the two American divisions turned into 10 in just a few weeks and then 20, and then 30.(2) What the French and British and Russians couldn't end in four years America ended in four months.

What none of those American soldiers had were beards or soap made from a Gwyneth Paltrow fever dream.

Everyone who didn't have an affordable razor or store-bought soap was going to get them thanks to the thing that was propelling America ahead of every country. The assembly line.

The assembly line was changing American commerce so that it would be more than a resource superpower, it would be the economic engine of the world. Now no one had to make soap by hand like a peasant, they could buy it cheap. Who was most happy about that? The women who overwhelmingly got stuck doing housework. That was progress and soon after we got the 19th Amendment where women could vote. Now, I am not saying that mass-produced commercial soap caused equality but I am not saying it didn't either. Women spending less time making soap had more time to think about how they could screw up political decision-making as well as men.

Soap had made progress and so had America.

Now progress means invoking old-timey days while having nothing in common with them.

The last time beards were cool, soap was made using animal fat and lye. So despite Dr. Squatch imagery that the company will make you more of a Mensch than you really are, this is not real soap like our ancestors made. Does theirs at least have lye? 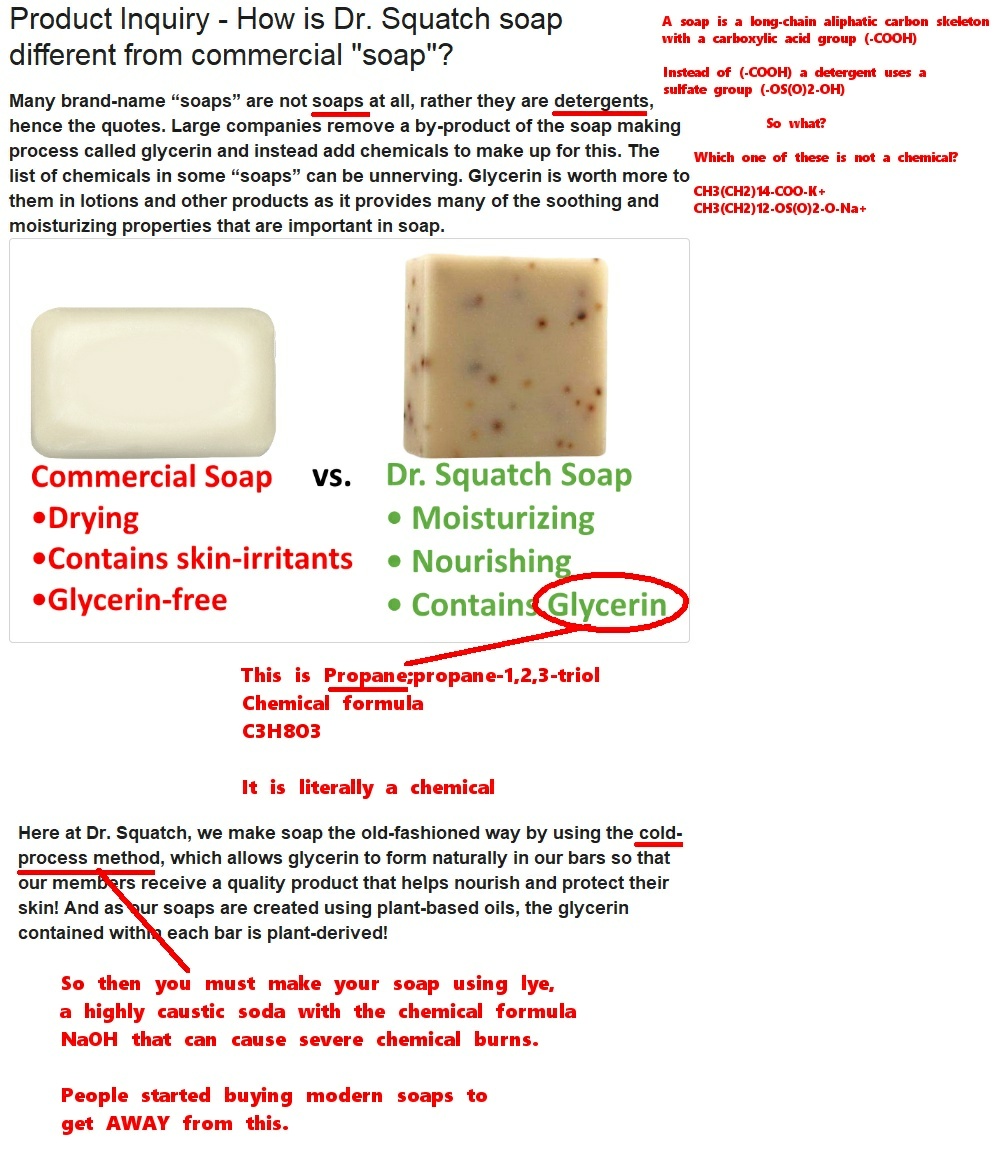 CLICK IMAGE TO ENLARGE IT. I had to combat a lot of disinformation and misinformation in one graphic so the letters may be small on mobile.

Oh good, it does use lye! And lots of other chemicals.  But how is it that they keep claiming they don't have chemicals? They are selling to people who don't have any better idea about what a chemical is or how science works. If it can be found in nature, it is not a chemical to them. Just like opium or kratom is probably not a drug to them, because it's made from plants. Except that is not accurate logically, legally, or scientifically.

Even the herbalism market hates these claims, because herbalists sell sketchy products claiming they do something, and along comes a soap that says its soap is not even a soap.

If this is the first time you are seeing the term "nocebo", it is the opposite of a placebo. A placebo is, of course, a sugar pill or homeopathic water or whatever that allows your brain to trick itself into feeling better. If you buy Zicam and think it made your flu symptoms go away 2 hours sooner, you enjoyed the placebo effect.

The nocebo effect is the opposite of taking something to trick your brain into feeling superior, it is instead feeling better by removing something.

Once upon a time, Dr. Seuss told us the story of Sneetches, where those with stars looked down on those without. Sure enough, Sylvester McMonkey McBean came along with a machine that could give anyone a star for a price.  In America, thanks to the McMonkey McBean of science and technology making lots of things affordable, everyone could afford soap and razors and toasters and then televisions and cars. 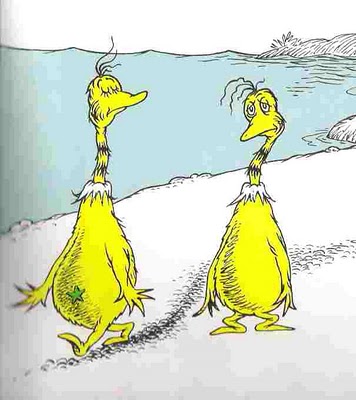 There is no Dr. Sneetch, this was by Dr. Seuss, and playing the role of Sylvester McMonkey McBean is Dr. Squatch, who will sell you a star, or the lack of a star, because it will make them money either way. Credit: Dr. Seuss Enterprises

As America got wealthier and wealthier - back then poor people might buy meat once a month but now poor people can afford to be as fat as anyone - elites had to find some new way to virtue signal.

McMonkey McBean had something for them too. The same machine could remove stars.

Detergent companies that had proudly claimed "Our Detergent Now With New Chemical X!" found themselves on the defensive when products came out that said "Our Soap Has No Chemical X!"

It suggested that the modern world, what people looked forward to right through the 1960s, was a bad thing.

So wealthy elites began to separate themselves from the common folk by buying expensive products that did not have certain ingredients. By the 2000s, organic food touted it was not a GMO. Sure, organic food strains were made using Mutagenesis, chemical and radiation baths that preceded more precise GMO technology, and they bragged that they did not use Glyphosate while downplaying that they use Copper Sulfate, which scientists knew they could also paint with. And it worked.

So we got lots of nocebos; gluten-free labels on steak, non-GMO labels on rock salt, Evaporated Cane Juice so Whole Foods shoppers wouldn't think they bought added sugar in 400 calorie deli cupcakes, you name it and someone was selling a label saying they don't have it.

And so now we get the next iteration; not just a nocebo but people selling soap they claim has no chemicals at all, even though it can't be soap and not contain chemicals. It is impossible. And it is impossible chemicals in regular soap are making you infertile but the chemicals in vegan organic soap are not. The great-grandfathers of everyone in the marketing department behind this ad campaign used animal fat mixed with artificial chemicals to wash every chance they could and had babies just fine.

That makes their marketing dishonest, as hilarious as the commercial is.

It's probably fine soap. If you think it makes you more manly, yayyyyy capitalism, that is O-K by me. But what they are doing to science to make a buck is D-I-R-T-Y.

(1) At least I hope. Generally, someone who believes Science Is A Corporate Conspiracy believes the same about medicine but I thought the bearded community was fractured between hipsters, who are definitely anti-vaccine ... ... and guys who think it will make them seem more manly.

(2) Later it became claimed that the Americans just showed up late and did little, but in March of 2018 and with Russia capitulated Hindeburgh and Ludendorff had 70 assault divisions in Europe. When they attacked, they went 10 times farther in one week than the Allied British and French had ever gone. Trench warfare had ended because they knew what their government denied; the Americans would end the war in the summer of 2018 unless the Germans finished off Europe first.

They managed to hold out politically until November when Kaiser Wilhelm abdicated.
Science 2.0
More Articles All Articles
About