Hank Campbell
I like the idea of "Shark Week" but I confess I am more of a reader than a television viewer. Still, when Discovery Channel whacked me as part of their "Shark Week" promotional campaign a few years back, it felt like a 'we have arrived' moment for Science 2.0.

"Shark Week" is big. And it may be a victim of its own success.

One writer at The Guardian says Discovery Channel is sinking to tabloid status because of this year's "Shark Week".

Where has he been?  Did he not see "The Lost Tomb Of Jesus" and those ghost hunter shows and everything featuring Zahi Hawass and that thing about ghosts invading Britain and the shows on Bigfoot and a whole catalog about the Shroud of Turin? Discovery Channel went into tabloid status long ago, right along with National Geographic and the Science Channel and its version of "Pawn Stars", which centers on an antique store for weird science stuff. I get emails from every one of those companies three time per week peddling this stuff and it doesn't bother me. (1) 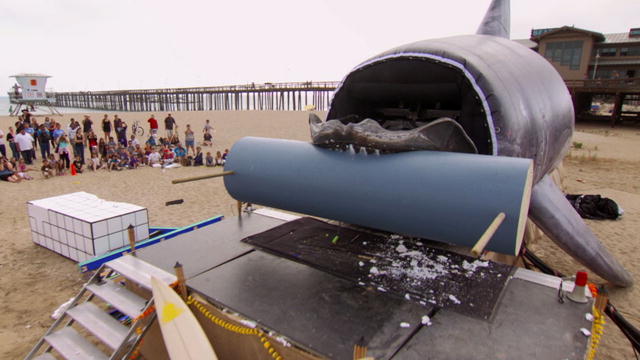 Megaladon. Really, if you are getting your knowledge of sharks from "Shark Week", well, you are not reading this site. And if you are critical of "Shark Week" because it does not conform to your notions of entertainment, you need to lighten up. Credit and link: Discovery Channel

The outrage seems to be over "Megalodon: The Monster Shark Lives" and lamentations that "Shark Week" is not as serious as it was 20 years ago. Sorry, folks, culture has moved on. People have access to an unlimited amount of serious science today (thanks for reading here!) so they don't need it on television. Television actually does a poor job of conveying science, outside the graphical elements, because it is so expensive to produce and therefore can't do it well.  And, really, people don't need it. When I was just leaving college, adult science literacy in America was one-third what it is today, and those people don't need television shows now. So if the argument is that television science should be targeted toward kids, okay, but it is not the role of any for-profit network to act in the best interests of a minority who does not need their product.


Even the marketing for "Shark Week" is not geared toward kids. And adults don't need to get science on TV, they want to be entertained.

That, to me, is the key issue. A writer at The Guardian is getting paid to tell an interesting story. There is a 100% chance an editor sacrifices science accuracy for a good narrative every single day and they are right for doing so. If you want accuracy, be one of the 500 people who reads a study in a journal.

It smacks me of vaguely elitist to have critics at for-profit media companies telling another company how to run their business; start your own science network, make it boring and dull and super-factual. It is a great way to lose $20 million fast. As Forbes notes, "Megalodon" was a huge ratings success. If Discovery Channel can put out some schlock in order to produce good stuff, then they are acting like most media companies. You want to see schlock? Read almost every successful open access science journal and you will see total nonsense gets published - but it pays the bills for quality stuff.

If you are writing or blogging as part of a million- or billion-dollar media corporation and claiming someone else has sold out, I hope your irony meter is shut off.

(1) If it were taxpayer money, it would bug me, so I would rather not have PBS making shows about aliens and psychics. "Asteroids: Doomsday or Payday?" is just marketing, no reason to get alarmed.
Science 2.0
More Articles All Articles
About