Hank Campbell
You probably think that because I started a hybrid social media/science media darling like Scientific Blogging, adored by many, I must know a lot of people.   Just the opposite is true.  I know shockingly few, so I never have those awkward moments where I get a phone call and someone says "It's me" and I have to stall and keep them talking long enough to figure out who they are.  Because no one has my phone number and the few who do are more surprised if I answer. I am going to recognize the voices of anyone who has it.

So I don't get phone calls but occasionally I get gifts.   Gifts are great but some are a bit of a puzzle, like the time I got a rock and a hand towel.   I couldn't figure that out until I got an email from the contributor who sent it and told me the rock was a piece that had fallen from a rather well known wall in Turkey and the towel was for Bloggy.   Then it all made sense.    Sometimes I get a video game or a book to review.   And then there are times when I receive my own obituary and find out Discovery Channel has decided to kill me for Shark Week. Yesterday another mystery presented itself.   I received a post card.

No signature.   Odd.  Well, I don't know that many people so I immediately dismissed it as a promotional thing from this Adventure Country skyline company (and, if so, it worked, since they are appearing in my blog - just like Shark Week got attention for sending me a box containing bloody swim trunks and my own obituary on newsprint) though if that were the case, they are making a bit of a positioning mistake.  Here is the front of the post card.

No planes to be found, and that could be downtown Baghdad for all I know.  A marketing company wouldn't be so obtuse.

So if it's not marketing is it someone from my past?   I was an Army officer(*), though anyone knows me knows my reaction when they asked me to go to Airborne school:

Question:  Would you like to jump out of airplanes?

Answer:  Maybe. Is it on fire?  Did the wings fall off?  Am I saving the President?

Follow-up:  No, but you get a patch to wear afterward and they push the medal into your chest with the little spikes exposed, if you'd like.  You know, so you bleed.

Me: (dumbfounded look) It sounds like you are asking if I want to jump out of a perfectly good airplane, which seems like more of an IQ test than it does military training.   Anyway, look at this face.   You know what this face says?  It says I should be flying things, not jumping out of them.


The closest to combat I got was these miniatures we used to make plans about what to do if the commies ever attacked and we weren't golfing.

Anyone who knows me knows that "You have to come with us next time" is never going to happen.    So that eliminates someone from my past.     One other thing that eliminates both (competent) marketing people and someone from my past is the company in the address; they get my name right, and they probably went to the website to get the company address, but they still list the company as LiveScience(**), which is likely just a slip up.   We have a terrific relationship with LiveScience and they appear on our site and we appear on theirs but no one coming here for the first time would think I work for LiveScience.   Someone who knows both companies could easily just make a mistake because they were busy filling out a post card.

So was it one of you?   If it was a marketing stunt these guys got just enough wrong for it to be really, really clever.    But if it was one of you, I'd like to thank you for thinking of me but note that if there are planes in our near future, I had better be flying one of them. 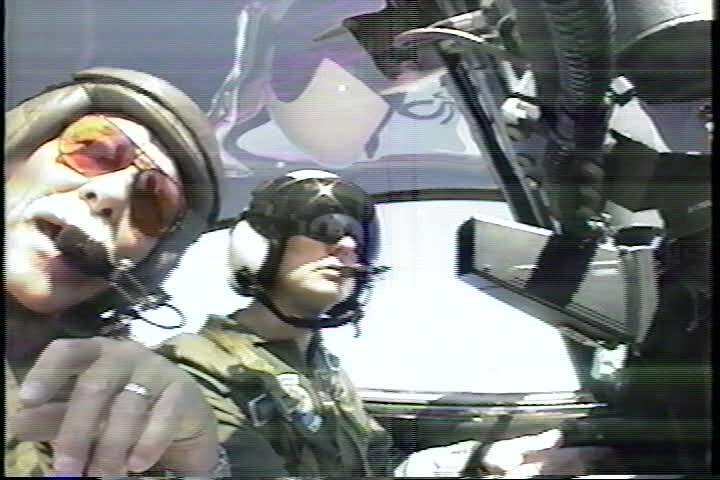 Me laser-dogfighting in an Italian Marchetti SF-260.  Fear not, the real combat veteran pilot next to me handled takeoff and landing.  If you want to give it a go, AirCombat USA is where I went.

(*)  Don't get too caught up in that, it wasn't as exciting as it is now.  Whenever people around my age ask if I had any adventures or stories as an Army officer I just say, "No, Reagan was President" and they understand.   It's pretty safe when the world knows you have someone who will pull the trigger.  We golfed a lot.

(**)  Yet our office building mail delivery system was not confused by LiveScience at all.  Any time they see 'Science' or 'Awesome' they know it is for us.
Science 2.0
More Articles All Articles
About