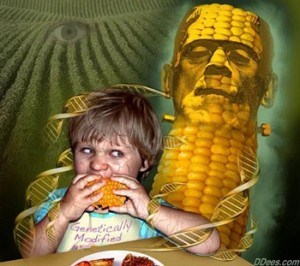 Imagine we lived in a world where spontaneous mutations were caused by radiation and then released on an unsuspecting public without any testing.

Well, we do. It's called nature.

High-energy cosmic rays have been breaking chromosomes into pieces that reattach randomly, and sometimes creating genes that didn't previously exist, for as long as some thing has eaten some other thing.

Once science discovered that new versions of plants could be created much faster than the old way of grafting, by controlling radiation instead of letting nature just create chaos and danger, they began to do it. In 1936, the world was introduced to mutagenesis, a controlled way to bombard a plant with ionizing radiation and get something new. It was wildly successful, over 2,200 varieties of crops in use right now were created using genetic modification - but since it was genetic modification due to mutagenesis it is considered a "conventional breeding technique" and completely allowed in Europe. Enjoy organic food? You are eating a GMO.

What does that tell weird lack of distinction tell us? It tells us that the anti-GMO craze in Europe is a legal issue, not a science one. They picked a completely arbitrary definition in order to include 1990s genetic modification without wiping out almost 100% of the genetically modified crops then in use. It might as well be called an anti-Monsanto law, since companies like BASF and DuPont have rushed to satisfy the market that Monsanto is not allowed to serve by simply going back to less precise genetic modification - mutagenesis.

At Genetic Literacy Project, I discuss the problem with that stance. It's good for DuPont and BASF, of course, Europe has basically used government fiat to ban a competitor, but bad for common sense and public understanding of science on The Continent. GMOs were created because they could be more precise than older techniques while, as a report by the National Academy of Sciences noted, mutagenesis gets a free pass “despite the expectation that mutant varieties may possess and generate more unexpected outcomes … because of the unpredictable and uncontrollable nature of non-targeted mutations.”