Hank Campbell
A decade ago, a well-orchestrated political campaign against Republicans in general and George W. Bush in particular turned everything into an anti-science issue. Union of Concerned Scientists (UCS), which is run by a former Democratic staffer, was front and center in that effort, even drafting a popular 2004 petition saying Bush "has continued to distort and suppress science" which was dutifully signed by a bunch of people who were never going to vote for a Republican anyway.

More recently, the Obama administration has distorted and suppressed science related to Keystone XL, the Deepwater Horizon oil spill and Yucca Mountain yet UCS has not drafted any petitions about those at all.

It's almost like having "Scientists" in their name is just for show and they are simply another political action committee. Well, that was their origin, they were founded to protest the Viet Nam war - but only after a Republican was in charge of it. And evidence is not required before they start a cultural jihad. In 2003, they tried to foment hysteria by claiming that antibiotics in fast food were leading to antibiotic resistance among the public, and after Democrats dutifully created legislation to act on it, there was found to be no evidence and UCS was forced to admit they made it up.

Today, they still unsurprisingly advocate the latest anti-science fads of Democrats, including that genetically-modified food is dangerous. Others have noticed what I have said since 2006, that UCS is "one of the most ideological of all the green groups" and science is simply a tool in their culture war chest. But 2004 might as well be a hundred years ago. No one takes them seriously now and, even worse, they are being openly ridiculed as the Union of Concerned Trolls by people in science who might otherwise be considered sympathetic.

A concern troll is the brother-in-arms to the sincere skeptic. Someone who adopts the veil of the sincere skeptic pretends to be a fan of science and acts as if they will be convinced if you answer one last objection. Their secret goal is bogging researchers down with objection after objection, always seeming to need just a little more data. A concern troll is instead a fifth columnist who infiltrates the ranks, in the case of science pretending to be an ally while creating ethical concerns or slyly discouraging efforts by saying the research is not worthwhile.

That's what the Union of Concerned Scientists does. They are solely interested in creating more rules, laws, barricades and legislation to science in order to advance the agenda of their donors or their political allies in the Save Our Environment Action Center. And to do so they say science they happen not to like is just not worth the cost or the effort.

Mary Mangan calls them out in a guest post on Random Rationality with the title The Union of Concerned Trolls - because Dr. Doug Gurian-Sherman has once again donned the veil of sincere skepticism about GMOs (something he did not adopt when endorsing the fraudulent nonsense of Gilles-Eric Séralini) and then that of the concerned troll. It's rare someone can do both, but that is how you get hired at UCS. You have to know enough science to engage in trickery, make deliberate misrepresentations and redirect research goals to the ideological preferences of UCS.

Mangan shows him to be a concern troll of the first order - supposedly embracing biology while intentionally getting it wrong in order to express 'concern' about it.

Gurian-Sherman claims breeding is good enough and so wonders if GMOs are 'worth the trouble'. What trouble is there in a vitamin-enriched bowl of rice? Only the 'trouble' UCS and Greenpeace have invented. And he oozes sincerity, so if you don't know anything about biology it is probably convincing, especially when he makes GMOs and herbicides into a jumble of false equivalence. 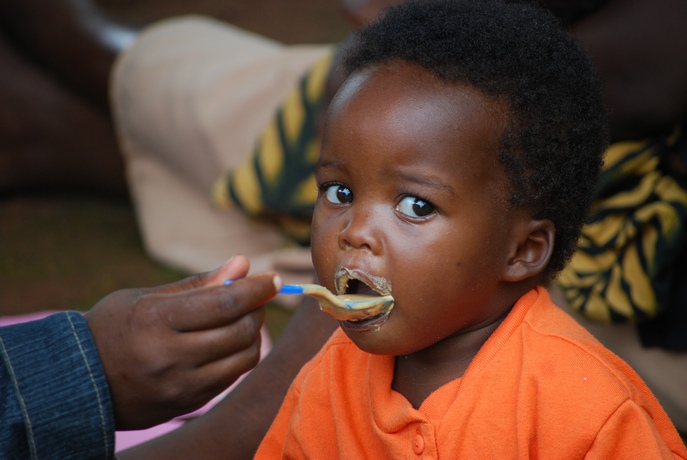 UCS hates science more than they love people. The Golden Rice they protest is not a corporate monopoly nor is it dangerous - but to First World elites like Union of Concerned Scientists, preventing blindness in children is 'not worth the trouble'. Image: GoldenRice.org

It's odd, albeit in a hilarious way, to see a UCS employee disqualify the science consensus. It probably makes their allies at the Global GMO Free Coalition happy, though it is unclear if UCS also believes that vaccines are the same as cannibalism and medicine is subverting evolution. They usually love consensus. They have yet to do anything but issue an unqualified endorsement of everything the IPCC has ever written, including the consensus that African farmers were going to have 50% yield drops by 2020 and that Himalayan glaciers would be gone by 2035.

While GMOs are studied and developed by some of the smartest biologists in the world, IPCC membership is determined by geographical and gender quotas rather than expertise. UCS never says that climate research might not be 'worth the trouble' or how unqualified members of the IPCC are, the way they do about the consensus in biology, and instead gush that the science is settled.

Concern is only invoked about GMOs or nuclear science or anything else that just happens to coincide with the political beliefs of their donors. That's not science, and neither is the Union of Concerned Scientists.
Science 2.0
More Articles All Articles
About