Hank Campbell
Organic farming has had a pretty good run. While creating a $100 billion Big Ag juggernaut they were allowed to carve out their own special fiefdom inside the USDA, run by organic food lobbyists who could exempt any synthetic ingredient their financial backers wanted - and when the USDA wanted to bring oversight back, they protested angrily at having the same standards conventional food has.

Now they are angry with Whole Foods for implementing a uniform standard for determining how well food is grown in harmony with Gaia - and for not exempting organic food or at least giving them super bonus points.

This "Responsibly Grown" rating system is consumer-oriented rather than supplier-oriented, which means organic food can't just get a health and cultural halo from the company, they have to actually document how they protect the environment and pay a fee. Rather than just claim "organic" and list what state it is from, which means very little, Whole Foods wants farmers to itemize how they treat their workers, how they limit pesticides - not just invoke the archaic and meaningless "organic" pesticide whitewash - and how they conserve energy and protect soil and wildlife. 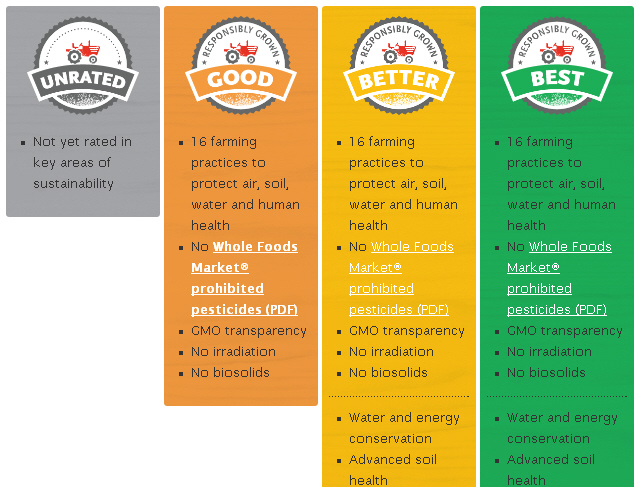 A cropped snapshot of the rating system. I don't include the whole thing because they are a big corporation and may sue me if I do. Credit and link to the entire list of benefits: Whole Foods.

The real issue for organic farmers seems to be that Whole Foods will not automatically give organic food a bonus in the ratings, the playing field is level and fair. Conventional food can be grown just as ethically under the Whole Foods rating system, and get a "Responsibly Grown" Best rating. Don't want to fill out the paperwork? You will be "Unrated", which to Whole Foods shoppers will mean you have something to hide.

Dan Charles at NPR blogs went into a Whole Foods and found conventional onions labeled "Best" and organic onions that were"Unrated" when it came to how "responsibly" they were grown. This has to be enraging organic farmers. You can almost hear the psychic wailing - But this is our store.

They don't actually engage in psychic wailing, that is too 1970s. They call it an "existential threat" instead.

Well, maybe Whole Foods now wants to be a store for everyone. It seems strange for organic farmers to claim the labeling will be too intrusive, since their profit margins are so much higher than regular food and they insisted GMO warning labels would not be costly for their competitors.

The pretty labels touting responsibility outshine the organic ones, organic food advocates claim. Charles quotes farmers trying to get Whole Foods to give special weighting to any food with an organic sticker - which tells you their protest is not about letting consumers make choices based on their values, it is about keeping their $100 billion organic industry growing.
Science 2.0
More Articles All Articles
About