Hank Campbell
Last week I did an update on the anti-vaccine situation in America compared to 2012, when my book, Science Left Behind, was published. I noted that things have gotten better, primarily because people on the left have turned on those people on the left who make up the bulk of the anti-vaccine movement; primarily wealthy, progressive elites.

Calling them out is to be applauded, and scientists (overwhelmingly liberal) have led the charge in doing just that. But some people have tried to muddy the water by pleading the alternative in ways no one ever did about the greater rate of evolution denial or global warming denial on the right. That's not a big deal, it is simple psychology that people will rationalize the beliefs of people on their side while having a clear vision of people they disagree with politically, but it needs to be clarified.

Those three sorts of 'we don't have a problem' denial are: if anyone on the other side thinks the same way, the problem is bipartisan; it's not denial if the rate of poor people who cannot afford health care is near the rate of rich people who choose to deny vaccines; surveys say the left is not more anti-vaccine.

At Real Clear Science, the co-author of Science Left Behind, Dr. Alex Berezow, has weighed in.

He uses a CDC map of exemption rates to show that 4 of the 5 top exemption states are 'solid blue', with Oregon leading the way. If you are in the 'if any Republican is against vaccines, the problem is bipartisan' camp, then you are delighted that 20% are Republican. But it's false equivalence. 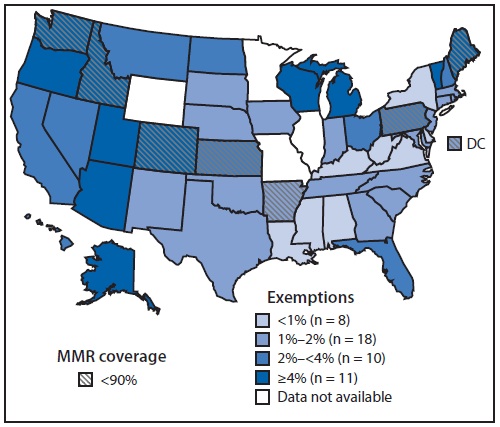 As I noted in my article, the most pro-vaccine states are solid Republican, but the issue is not Democrats, it is instead progressives, a specific sub-culture of Democrats who have a number of anti-science and social authoritarian beliefs.  Maryland, I noted, is the most heavily Democratic continental U.S. state but their 1% exemption rate is not cause for a panic button. Instead, the states where progressives hold political and social control is where a lot of anti-science beliefs become common; Washington, Oregon, California, etc. That is why The New York Times can ridicule progressive California for its anti-science mentality without worrying about annoying its New York and eastern liberal readership; liberals agree that California progressives are all wrong on the issue.

What about those red states? Texas does have a lack of people being vaccinated, but defenders of anti-vaccine progressives are choosing to skew the statistics there. We want to think about people exempting their kids, not to try and claim that poor people whose children did not get a Hep B vaccine at 19 months of age is the same as Jenny McCarthy. Legitimate medical exemptions are why we want herd immunity for people will immune issues and Texas leads in those. California, on the other hand, has 8X as many 'philosophical' exemptions as Texas has medical ones. There is a big difference between a school-age child whose parents have chosen not to get a vaccine and an illegal immigrant or a poor person who cannot afford it.

Lumping them as equivalent is false. With the Affordable Care Act, assuming those people can now get health care, the number of pro-vaccine people with un-vaccinated kids should drop, leaving just the true anti-science people on their own.

Progressives were not always anti-vaccine, so some of it is cultural fad and elitist hysteria - 'my special snowflake does not need your autism-causing vaccine as long as poor kids get them and provide herd immunity'. With the high-profile Whooping Cough epidemic in California, schools started to advertise when a child caught it, and it does not take long to know whose kid it is, so a certain amount of 'science shaming' has happened. Rates are still high but not as alarming as they were a year ago.

Mainstream news also makes a difference. You can bet if Ebola were to spread, and a vaccine were rushed to market, a whole lot of anti-vaccine progressives would change their minds about whether or not Yogic flying instruction could protect their kids as well as medicine.
Science 2.0
More Articles All Articles
About