Hank Campbell
"Those among us who are anthropologically inclined tend to view a can or bottle of soda as an instantly recognizable symbol of everything that is wrong with Western civilization as we know it" is the first sign indication that you have left planet Earth and officially joined the alternative universe of Woo.

And your tour guide is the features director at Martha Stewart Living. Now, when it comes to celebrity criminals, I like Martha Stewart, mostly because Steve Madden never really bounced back after his prison sentence while Stewart became more popular than ever after her conviction. And I appreciate people who can win against adversity.

But that doesn't extend to employees. Jane Lear wades early into metaphorical tomfoolery with her mournful diatribe but she is probably really proud of that sentence. It reads exactly how I expect a Manhattan editorial foodie to talk in real life.

The object of her scorn is ... Coca-Cola. She is convinced that it makes people fat, and she uses terms like epidemiology and BPA, because those words sound impressive to people who read Martha Stewart Living for its science content. She needn't have bothered using epidemiology, she already claimed to be an anthropologist - you only need to be a Manhattan editor for a food magazine for a decade or two to get an honorary degree in that, I guess - and epidemiology has gone out of its way in recent years to be anthropology, so it was kind of redundant.  And BPA is the latest scare journalism bogeyman of the political science majors who run environmental corporations but it still hasn't been shown to actually be harmful. 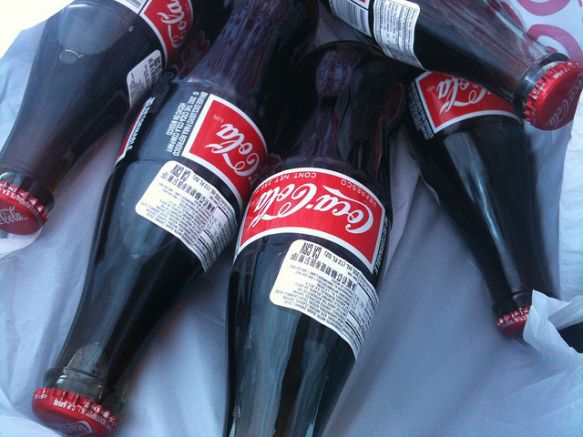 I think my heche en Mexico Coke tastes better. But I can't prove that. I can't even prove it has cane sugar, since after 30 days it has probably split into its constituent glucose and fructose anyway. But Martha Stewart Living anthroepidemiologists aren't going to get bogged down in all that irrelevant chemistry stuff when it interferes with their culture war ... BPA! Link: Take Part. Credit: magzalez/Flickr

But those are not her real targets. Coke is.  Apparently Coke makes people fat in 2013.  What changed? Hasn't the stuff been made since 1886 or so? Clearly you don't understand how Martha Stewart Anthroepidemiology works, do you?

Soda has chemicals and stuff.

There is one thing she gets right. She says that high fructose corn syrup is not really any worse than any other sugar, but that is only because she wants to lovingly parrot our favorite food crackpot at the New York Times, Mark Bittman, and declare that all sugar is evil.

Here's some anthroepidemiological facts for you, Coke heads who are not seeing her wisdom after 20 years writing for Gourmet:

Who's really fat? Mexicans, she notes by way of quoting an author she just happens to believe without any skepticism about the evils of Coke.  Who drinks a lot of Coke?  MEXICANS. So the delicious Mexican Coca-Cola with cane sugar isn't better than ours, it all has to go. Jane Lear has saved all of science about a billion dollars and solved the obesity issue for them.

Jane Says: Drinking Coke Is a Bad Idea—Even if It’s Made With Real Sugar - by Jane Lear at Take Part
Science 2.0
More Articles All Articles
About