Hank Campbell
After watching "Five Million Years To Earth", a terrific mix of science, horror and anthropology, it's no crime to associate British horror cinema with Hammer Films, even though that was not one of the bloody Dracula films which earned them their fame.   But the Brits had done other good horror cinema even in the immediate aftermath of World War II and they did it using atmosphere rather than special effects, a creative technique which is as rare, yet successful, today as it was then, as seen in the cult phenomenon of films like "Ringu" (and its American version, "The Ring", which the older family and I will watch this weekend) and "The Blair Witch Project".

The British call this film a 'portmanteau' - a movie composed of a common framework which has mini-stories inside it.    The stories in this are good from start to finish, the overall framework is terrific and with lines like "Just because a chap becomes a ghost, it surely doesn't mean he ceases to be a gentleman!" you'll laugh when you aren't sitting on the edge of your seat.

The common framework of the film is that an architect arrives at a country home after a call about doing a remodeling job, but he realizes he has seen it before, in nightmares he never remembers for long.   Everything proceeds from there, including magic mirrors, haunted golf games and that ventriloquist dummy that would make them forever creepy and be lifted for numerous other works in the future.

If you recognize plot elements you have seen in other suspense movies, that's not a coincidence - every filmmaker worth his stuff has this movie on his list of favorites.

This relates nicely to science because "Dead of Night" was an inspiration for the Steady State model of Hoyle, Bondi and Gold, which postulates that new matter is continuously created as the universe expands, so that the perfect cosmological principle is adhered to, and was for a time considered an alternative to the Big Bang, a name which Hoyle had ironically had created as a slight toward the idea. 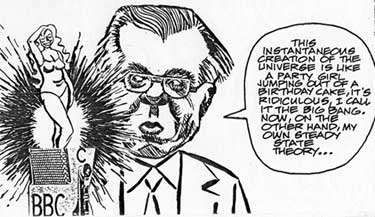 Hermann Bondi, Thomas Gold, and Fred Hoyle came up with the Steady State model in 1948, a  cosmological concept that believed the universe looks the same from every place at all times - in a universal sense. No beginning and no end, you could enter anywhere, just like "Dead of Night".

From "Conflict in the cosmos: Fred Hoyle's life in science" By Simon Mitton

One evening the three of them went to a local movie theater that was showing the 1945 classic horror movie Dead of Night, starring Michael Redgrave.    The action features a recurrent nightmare, and the movie has no beginning or end.  Gold said of this movie: "It's completely circular.  You can come in at any place and see it until the place you came in."

Very soon after the evening out, Gold hit on a remarkable parallel between the movie plot and the universe.   Hoyle yet again started puzzling over the implications of Hubble's observations.   What did it mean, all the galaxies flying apart?   Would space not soon become empty?  Gold responded that the universe might be just like Dead of Night, where you can come in at any time. Perhaps the universe had no beginning and will have no end!

This took some thought, since the universe is expanding.  To make that leap, matter basically had to be created from nothing, which could perhaps be accepted philosophically since the overall density was constant, but once astronomy was able to see distant galaxies and note that the ancient universe was not the same as the universe much closer to us, it began to lose ground.   Discovery of the Cosmic Microwave Background by radio telescopes showed thermal radiation undetectable by optical ones, and this 'relic' radiation could only be explained by The Big Bang, thus driving a stake into the heart of the Steady State model. 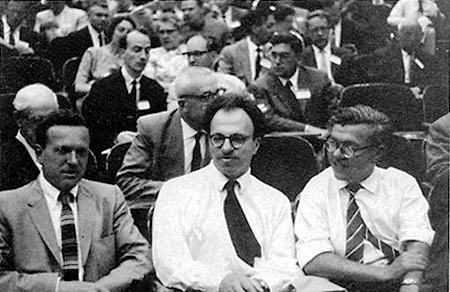 It is most often the case that science inspires movies but sometimes it is the other way around.  Certainly any movie that can codify an entire cosmological theory for three very smart people is worth a watch.  It is also, without being gory, gruesome or bloody, one of the scariest things you will see this year.
Science 2.0
More Articles All Articles
About