Hank Campbell
When I was a younger guy, I read my astrology sign 'predictions' in the newspaper.  It was in the comics section, so clearly no one took it too seriously.  But astrology had at least a foundation in science.   Unfortunately, like homeopathy, it has long outlived its quirky time even though it has been shown to be rubbish.

But people who do have an interest in astrology will want to take notice soon.  Astronomer Parke Kunkle told NBC the astrology signs have not been updated in so long they aren't really accurate.  In fact, there need to be 13 instead of 12, due to changes in the Earth's alignment.

Earth is in a different spot in relation to the Sun than 3,000 years ago when astrology first came into existence and its equatorial alignment has changed from that period when the 12 zodiac signs were assigned to 12 times of the year.   As the Earth has wobbled on its axis, a bump has been created in the alignment of the stars, says Kunkle.

Why introduce Ophiuchus now?   People have tried in the past and it has been known these would need to change - for about 2500 years - but Ophiuchus, also known as Serpentarius, is not included in most versions of the Zodiac because no one wants to give people who believe in astrology too many intellectual bumps.   Heck, Ptolemy listed Ophiuchus as one of the 48 constellations.

Ophiuchus is located between Aquila, Serpens and Hercules.   The southern part of Ophiuchus lies between Scorpius to the west and Sagittarius to the east.  You can see it best during the northern summer and it is located opposite Orion in the sky. 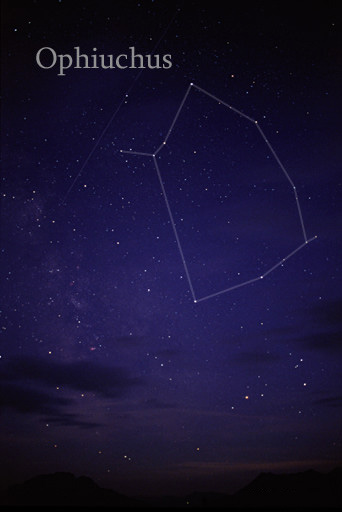 Luckily, we are assured, because astrology is entirely made up, even though your sign may have changed, your horoscope will not.    I was a Virgo this morning but now I am a Leo.  Thanks, astronomers!