Medieval doctors had to acquire a range of skills including an ability to read Latin texts, a working knowledge of the bodily “humours” and an understanding of the rudiments of blood circulation. Their diagnostic techniques were largely limited to examining a patient’s urine: they could match the colour of the urine to that on a chart, such as one now in the Bodleian Library, which offers an alarming spectrum of hues. After diagnosis, one of the most important treatments was bloodletting, for which physicians used detailed astrological charts.

In the middle ages, stars were laden with meaning and, with no light pollution in the sky, often easier to see with the naked eye than they are now. Belief in astrology was almost universal. It was generally understood that the planets and stars under which a person is born would exert influence over a person’s health and personality.

Someone born under Mars might grow up to be belligerent, while someone born under Venus would become lascivious. Sidereal movements – the movements of stars or other heavenly bodies – could also influence the person’s mind and body. Comets, eclipses and and conjunctions of planets were thought to foretell natural disasters or political coups. So meaningful were these cosmic events that every medieval European court had an in-house astrologer – and kings rarely took political decisions without first consulting them. 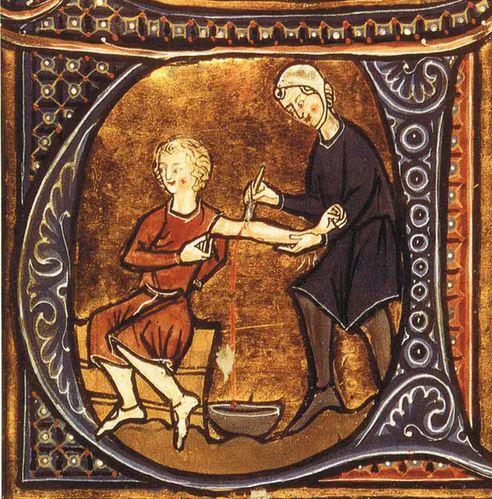 Medieval physicians, too, scrutinized the night skies and consulted elaborate hand-drawn charts before performing phlebotomy, the most prevalent health intervention until the 18th century. By letting blood, physicians could treat existing conditions – everything from headaches to corns – and restore the balance of the four humours in the body, blood being an admixture of all four.

Although children, pregnant women and those over 70 tended not to be bled, for everyone else phlebotomy was the go-to treatment. The surgeon would choose the day carefully – the age of the patient had to correspond to the phase of the Moon – and the ailment should be aligned with the position of the zodiac – that is, the fixed stars that rose annually and were associated with the months of the year.

Tool of the trade

A manuscript now in the National Library of Scotland probably belonged to a physician who wanted to calculate moon phases and sidereal positions before cutting open a patient’s vein.

According to the tenets of phlebotomy, the figures of the zodiac governed particular body parts. That concept is visualised in “Zodiac man”, according to which, Aries governs the head, Gemini the two arms, Scorpio the sex, Aquarius the shins, Pisces the feet, and so forth.

To treat an ailment of the feet, a physician would consult the night sky with respect to the position of Pisces. Calculating the celestial positions and the relevant time, place, and manner to incise the patient’s vein would require interpreting various charts in the manuscript.

Knowing how to manipulate such a manuscript and read its complex diagrams would certainly have impressed the patient and establish a power and knowledge difference between doctor and patient. The manuscript would not only have aided the surgeon in his calculations, but also served to demonstrate his expertise, a little like today’s white lab coat and stethoscope.

The Latin text flanking “Zodiac man” enumerates the available veins. This must not have satisfied the owner of this particular manuscript, because he added a sheet to the end of the bat book with an image of “vein man”. The diagram shows six veins on the arm, plus others on the face, legs, armpits and groin. The lines connecting the tapped man and the labels look red and arterial.

One type of manuscript in which one can find these diagrams is called a “bat book”. As the photographs in this article show, bat books consist of parchment sheets folded into compartments, like road maps that have to be unfolded in order to be read. Each rectangular leaf has a tab on one edge, and these tabs are gathered together with stitches so that the leaves can be bound together. They are designed to hang from a belt for portability.

In 2016, the great codicologist Peter Gumbert called them “bat books” – “because when in rest they hang upside-down and all folded up, but when action is required they lift up their heads and spread their wings wide”. The text is upside down so that the book is legible when it is hanging from the girdle.

About 60 bat books survive – the oldest having been made in Glastonbury Abbey around 1265 and the youngest in the 1470s as the printing press was sounding the death knell of the handwritten form. Of these, about 30 are English almanacs – including the one in Edinburgh’s National Library – which contain astrological and medical material.

This group of manuscripts contains calendars plus the charts necessary for calculating eclipses and performing phlebotomy. Two men originally computed the charts in the 1380s – Nicholas Lynn, who worked for John of Gaunt, and John Somer, a Franciscan friar who worked for Joan of Kent. Their respective patrons charged them with the same task: to calculate the future movements of celestial bodies for four Metonic cycles, those beginning in 1387, 1406, 1425 and 1444.

As Metonic cycles last 19 years, both men calculated eclipses and Easters up til 1462. The NLS manuscript was made in the early 15th century. After 1462 it would have lost much of its usefulness.

Elaborate and meticulous charts present these data, and also show how eclipses are formed, with the moon blocking rays of sunlight – (fig. 3, fol. 11v). The astronomical calculations in the book are remarkable considering that the astronomers who made them had a geocentric (earth-centered), rather than heliocentric (sun-centered), model of the planetary system.

Both Lynn and Somer worked in Oxford, so all of the astronomical calculations are for that city. One can also see that the manuscript was written in Oxford because one of the university town’s local saints, St Frideswyde, is featured in the calendar for Oct 19. It is possible that a workshop in Oxford produced such almanacs for doctors working throughout Britain.

In 2002 it was presented to the Edinburgh National Library as one of three manuscripts from the Borthwick Collection, but its earlier history is not known. Because physicians carried bat books on their belts, this book form probably has a lower survival rate than codices, which would have stayed indoors most of the time and been protected on a book shelf.

Further analysis may reveal that the manuscript contains bloodstains, from the book’s brief career as a utilitarian guide for a knife-wielding surgeon. The bat book could be considered a late medieval smart phone: a hand-held, portable computer with apps for busy professionals.

By Kathryn Rudy, Senior Lecturer in Art History before 1800, University of St Andrews. This article is republished from The Conversation under a Creative Commons license. Read the original article.