In an effort to keep the pressure on scientists who accept the overwhelming consensus on genetically modified organisms (GMOs), the hard-left political magazine Mother Jones has written another article using emails provided to the organic lobbying organization US Right To Know(1) to undermine science it has chosen not to accept.

In this instance, the writer is Tom Philpott, but the name of the writer is unimportant, since you don’t get hired there unless you are firmly against science and willingly forgo journalism. Though the emails listed have nothing to do with the American Council on Science and Health he tries to make it sound like they do early on – by using a snippet of an email from Monsanto executive Eric Sachs, who tells the scientists he is writing to that he would try to get us to discuss their science.

The problem with the Mother Jones article is that unless you are firmly in the vast-corporate-conspiracy camp, what the executive wrote looks pretty reasonable. And if it doesn’t look reasonable, what organic food executives write about using Philpott to sow doubt about conventional food looks far worse. We’ll get to that in a moment, but first here is what Sachs stated:

“I understand and appreciate that you need me to be completely transparent and I am keenly aware that your independence and reputations must be protected,” Sachs writes to the academics, and then suggests that to them that he might also ask the Council to communicate their work.

Welcome to Mother Jones journalism: You are either on their side in the anti-science scare story du jour or they will imply you are a shill. A Monsanto executive I have never spoken to, never even read the name before, said he would try to get the Council to promote science a few years ago.

Of course he would. We do that all of the time, that is why you are a reader here and not Mother Jones. I don’t know how many emails my predecessor at The Council got in 2013, but I get 40 a day from groups asking me to promote their science. Because science and health is what we do and Mother Jones seems to be concerned about any group that is a credible voice for policy-makers and the public. People like that we impartially distinguish between health threats and health scares.

Unlike Mother Jones, which was founded to promote communism and an end to Israel and only later discovered donor dollars would flow if they hated science as well.

You can bet if the pro-science side actually did have people doing investigative leg work about organic activists and the influencers they have spreading their messages, there would be Freedom of Information Act requests going out all over the place, and plenty of emails where corporate executives say they will get Philpott to promote their work.

Perhaps like this one, from the same year Mother Jones implies we were ideological poodles for Monsanto: 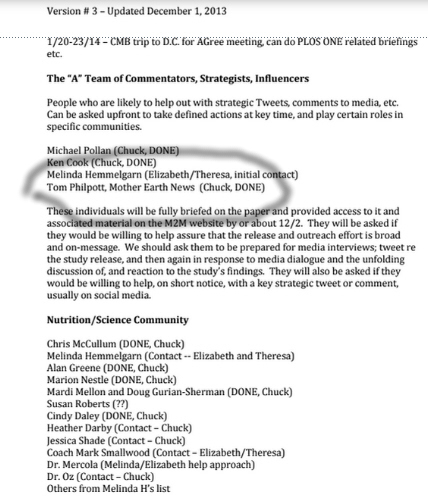 See how it says DONE right next to Tom’s name? That is far more damning than an executive hinting that they might be able to get us to do something for them (I checked and we didn't but Philpott refuses to show he didn't help the corporation keep his readers "on message.")

Tom laughs off any notion of him being a reliable shill for corporations when the email is about him: 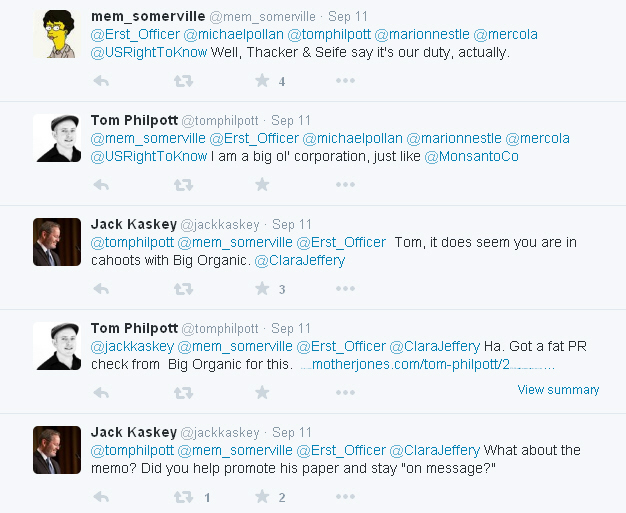 Organic food proponents have defended him being on that list, saying it is common for reporters to be pitched stories…and he agreed. Yet hypocritically he was willing to allege that by even being mentioned in an email from Monsanto – saying they would pitch us a story – we must have been willing accomplices.

Is it only wrong to have DONE next to your name when you are pro-science? That seems to be the case for Philpott and Michael Pollan and Marion Nestle and other organic food influencers and the publications that amplify their message.

Anyway, yes Mother Jones readers, I proudly admit we are behind the science of GMOs, and we cover that science even if the corporations Mother Jones was founded to oppose are the groups doing it. Nobel Prize winner Dr. Norm Borlaug, the father of the Green Revolution, is in our Founder’s Circle and we promote GMOs because they are a gigantic boon for agriculture, the poor, and public health - like he knew they would be.

Knowing that we are in the bag…for science and reason, anyway…if Monsanto or anyone else wants to fire off a check as a thank you for our 37 years of efforts, by all means do so. We will take your money – but there are no strings attached.

Instead of worrying about coming up with articles to keep corporate donors happy, the way Mother Jones does, we will keep on supporting science whether a company supports our outreach efforts or not – however, I am betting that Tom Philpott will stop writing these conspiracy articles if the corporate donors for the foundation that launders money for Mother Jones stops writing checks that make their way to him.

(1) USRTK is run by long-time political activist Gary Ruskin and it's most prominent director is Lisa Graves, who controls the public relations and lobbying group that funds the partisan site called SourceWatch. Graves is a longtime Democratic activist who gets over 30 percent of her funding from undisclosed corporations. Ruskin receives 100 percent of his funding from organic food corporations.

Like SourceWatch, Mother Jones has never seen a reason to examine the influence of the $100 billion in organic food companies that are funding efforts to undermine their competition.