To start with, they would have to convince CERN scientists that 'cosmic energy' actually exists, and they recently got a chance to do that when the European Organization for Nuclear Research (CERN) hosted Drukpa Buddhist's Spiritual Head, His Holiness the Gyalwang Drukpa.

In western academic culture, we always see people call Buddhist leaders 'His Holiness' because that is the title but referring to a Catholic Pope as Bishop of Rome, Vicar of Christ, Successor of the Prince of the Apostles, Supreme Pontiff of the Universal Church and Primate of Italy is frowned upon - instead we just see griping about Galileo and gay pederasts whenever a Roman Catholic is mentioned.  Contrast that to the Being Human conference I went to earlier this year, which had zero western religious speakers though you could have created a drinking game built around how many times the psychologists and sociologists there mentioned meeting His Holiness The Dalai Lama - and they even had some Buddhist speakers. It sucks being a Buddhist in actual Tibet but since these guys are instead all over the West meeting and greeting the social sciences, it seems to be a pretty sweet life.

Anyway, CERN, WHO, WWF, the Green Cross and others invited His Holiness The Gyalwang Drukpa to talk about how scientists and spiritual leaders can play together nicely in promoting global well-being. That means encouraging eastern religion to accept some science so invoking cosmic energy was odd.

Global well being is nice and all but what is really cool is that His Holiness The Gyalwang Drukpa brought along a group called The Kung Fu Nuns. Sort of cool, anyway. They sound like they should be starring in a Quentin Tarantino movie but it seems they mostly work in hospital clinics and hold the world record for tree planting rather than ass-kicking, which seems rather tame for a sect whose name means 'Dragon'.

His Holiness The Gyalwang Drukpa said,"The spiritual community should be working with the scientific community to tackle today's global problems instead of resisting science. While we may use a different language, we are talking about the same thing and heading in the same direction."

That seems obvious and he is doing his part for gender equality, since the Kung Fu Nuns are women and Asian culture is generally still in the 19th century regarding treatment of women. In an American society that worries if math classes are only 48% women and calls an invitation for coffee in an elevator a rape threat, it's difficult to see why so many in academia embrace Eastern religious leaders, but His Holiness The Gyalwang Drukpa has bucked tradition and is a proponent of gender equality and that is to be applauded.  Four years ago he brought Kung Fu to their nunnery and doesn't make them just wash the dishes and stuff any more.

Expecting a hot Nunja?  You will be disappointed.  But unlike the Western military, Kung Fu nuns don't get their own special self-esteem-based scoring system for physical tests.  They still have to shave their heads just like the men too. Credit: Drukpa sect

We're a science site and we want to learn new things, so if you are a Kung Fu Nun in training and have learned to do that Chöd-Dance, please send a video.

If they really want to be embraced by the West, they should create a television show called The Bachelor: Shaolin: 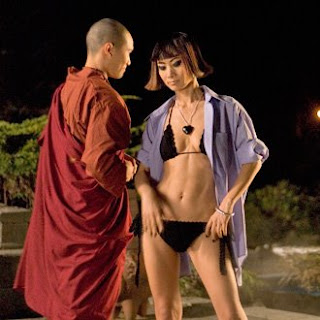 Credit: No idea where this came from but it looks like an awesome movie.