Hank Campbell
If you've watched any World Cup games so far (and a record 15 million in the US watched Saturday's match versus Ghana, so statistically, ummm, 50,000 people in our audience have watched at least one) you may have heard an omnipresent buzzing sound and assumed it was a horde of mutant bees in the broadcast booth or a defect in your television.

It was neither.  Instead, it was a vuvuzela ("lepatata"), a B flat plastic horn that is loved by South African sports fans and hated by everyone else.  Seriously.  During that first World Cup match I watched it was so annoying I was convinced that if the people at Abu Gharaib had access to these things, terrorists would have caved in long ago.

But then a strange thing happened.  I ranted enough about it that a South African engineer (1) decided to engage in some cultural outreach, and she sent me one. 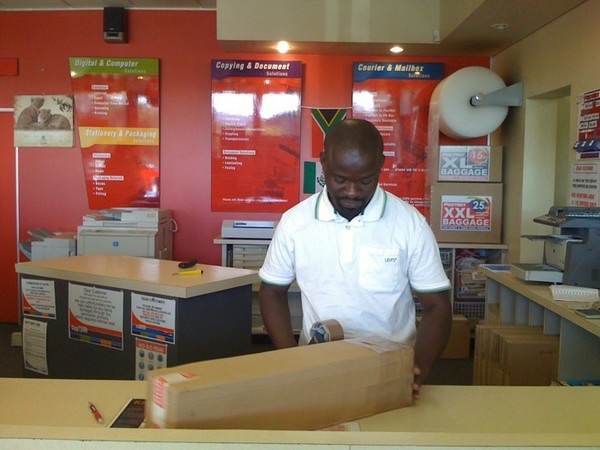 Cecilia said the people she told her story to were so amused they used their best American accents talking about her efforts to get the vuvu some love.  Here it is at DHL in Pretoria.  Could you drop this store anywhere in the US or Asia and have it fit right in?  You betcha.  Globalization rules!

It was only a few days later that I received it - it was a ridiculously costly outreach effort it turns out (2), but South Africans are proud of their culture and so are willing to go the extra mile.   And during the ensuing matches and my research into how it works and why it bothers people, I grew to love my vuvuzela.  Maybe you will too.

I am told the vuvuzela decended from the kudu (antelope) horn(3) blown to summon African villagers to meetings.  Later it was made of tin but when it became popular at football matches a company began to mass produce them from plastic in any number of colors. 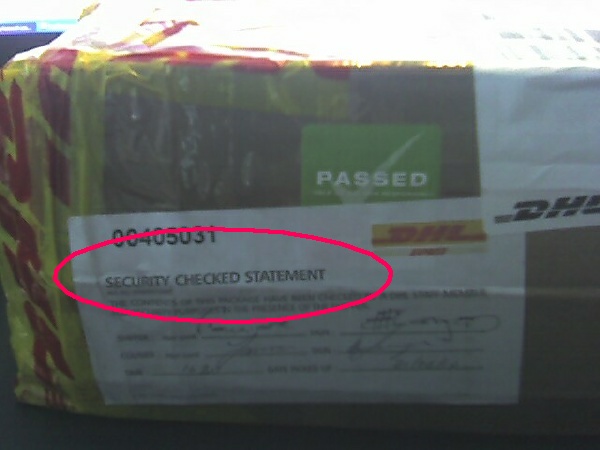 If you don't blow this vuvuzela really loudly, the terrorists win.

What does vuvuzela mean?

Any time you deal with old cultures history gets muddy.   SouthAfrica.info says  is might be siZulu for 'making noise' or local slang related to the word 'shower', because it looks like a shower head or, perhaps because South Africans like to put a positive spin on it, they are showering people with music.

As you will hear in the video, this thing is loud so some of them have disclaimers about blowing directly into anyone's ear.  How loud?   120 dB at 3 feet from the horn opening(4) - since the Decibel scale is logarithmic, an increase in 10 is a doubling of the volume, so 120 dB is as loud as being in the front row of a Who concert or standing next to a 747 jet turbine.  So don't do it.   Not knowing this in advance, I blew on the thing at full strength here in the house and I am pretty sure I made my dog sterile.

All horns work the same way.  You blow into them and that creates a vibrating column of air but the construction of the horn means certain resonant frequencies will occur.   By using lips or a trombone slide, for example, you can change to a different resonant frequency.

But there is a deeper answer and our physics ancestor Schrödinger, he of the famous perhaps dead cat, has it ...

... when he told us the quantum state (wave function) of a physical system changes in time in 1926.   Louis de Broglie hypothesized that the waves travel along classical paths so they form standing waves for certain discrete frequencies.

And here you thought it was just a horn.  Turns out it is a physics lesson and a study in psychology all in one.

That's awesome.  Where do I get one?

At Amazon or at the FIFA Buy Vuvuzela site.  Or make friends with people in South Africa!

How do broadcasters lessen the noise for television viewers?   And how can I?

The sound is dampened quite a bit on TV.  Vuvuzela notes are at a frequency of 235 Hz so they use adaptive notch filters to preserve the volume of commentators' voices and crowd noise but reduce the vuvuzela sound so it does not sound like an elephant is emerging from your television.

Still too much vuvu for you?  You can buy the Anti-vuvuzela filter, which is basically an MP3 file you put next to the TV with the same amplitude but inverted phase of the vuvuzela, or you can do it yourself through your television or stereo equalizer - however you listen to sound that goes with your TV -  by turning down the bands at 235 Hz and also the vuvuzela's harmonics at 470, 700, 940, 1171, 1400 and 1630 hertz.

But I leave the sound on now.   At random moments I also go outside and give my vuvuzela a blast.  Birds get nowhere near my car now that they know I have this thing.

It's great fun but can you play music with it?

Sure, though I can't.   It is a monotone instrument so it all comes down to lips.    The horn has a resonant frequency and the resonator in the vuvuzela is our lips, so by adjusting lip tension we can move the 'virtual' tube end created by the wider aperture at the end and adjust the sound.

In 2006, Pedro Espi-Sanchis and Thandi Swartbooi of the South African music group Woman Unite created a vuvuzela orchestra with Espi-Sanchis as conductor and soloist on the lekgodilo flute and six musicians each playing a vuvuzela.    Their first performance at a soccer match was at Ellis Park stadium in November 2007 during the Nelson Mandela Challenge match, when Bafana Bafana took on the USA.


Notes:
(1) And the US Embassy in Pretoria!
(2) R2100, which my handy currency translator says is $281 US.  Yikes!
(3) ixilongo in isiXhosa and mhalamhala in Tshivenda
(4) Swanepoel, De Wet; Hall III, James W; Koekemoer, Dirk , 'Vuvuzela – good for your team, bad for your ears', South African Medical Journal,  100 (4): 99–100.
(5) And if you still believe the vuvuzela is the greatest evil to hit the world since a certain Ring we all know about, you will appreciate this video: