Hank Campbell
Sure, Christmas is a religious holiday and science and religion share common people but not often common ground.   That doesn't mean we can't all join together and share some Christmas science ... and an awesome electric car (5 MPH!) I assembled for my youngest kids last night (picture to come later).    Like Rock'em Sock'em Robots, even adults think miniature cars are cool.   If you're the environmental type, I am basically teaching my kids to like a Prius - and it goes about as fast.  So thank me by reading some of the terrific science below:

Christmas is about a birth but there's a star that lets everyone know where it happens.   So first go take a look at  this astronomer's explanation for the Star Of Bethlehem - planetary conjunction or Christmas miracle? Yes.  Bonus: it's sure to enrage all the left wing atheists you know.

If you're not the religious type and have no atheist friends to wind up with Christmas stars, Christmas can just be about getting good stuff.  That's okay too, but use some caution.   One in Three Women Would End a Relationship Over an 'Inadequate' Christmas Gift and the last thing you want on Christmas is to be stuck with no girlfriend and an extra bowling ball you thought she would love.    However, great presents and the right outfit can take you a long way at Christmas, since 20% of women harbor a Santa fantasy.  I am wearing a Santa hat right now, just in case.

Hats can't save you from the laws of physics, unless they happen to be in rhyming verse.  Then anything is possible.    Take this snippet, for example:

So let's look at the atom and all that free space
It will help us decide how to win the big race
Think of atoms like apples, but we just need the stem
Maybe C squared's no problem when you're E without M. 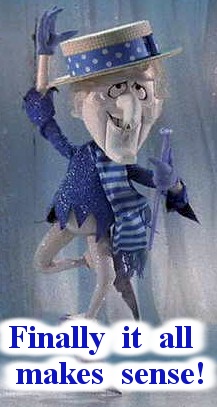 Someone's going to complain about your tree, no matter which kind you have.   We have the definite answer in The Great Debate: Real vs. Artificial Christmas Trees - there's a good reason to go organic in your choice of trees.

If you're spending the holidays with family and having thought about presents so you still Need A Christmas Gift For That Special Left-Leaning Chick? Try Ethical Underwear - because apparently companies think you'll believe anything.

If, like me, you were  in the garage until 11PM putting together a pre-school Prius, you didn't  have a lot of time for wrapping.   Like anything else, you can get scientific about it and save the environment.   See what we mean in The Science Of Eco-Friendly Christmas Wrapping - it's mathematically terrific.

It was rainy and cold last night yet I still got a knock on the door from someone out on Christmas Eve raising money for a homeless shelter.   The response he was getting was not great, which seems odd on Christmas Eve of all times, but I made up for my neighbors.   Christmas Charitable Giving; Which Of These Personality Types Are You? - if you recognize which you are, and it isn't good, here are some alternatives.

If you like that twinkle in the eye the kids have when they see all their presents, be assured cynicism is just around the corner.   What Happens To Santa When Kids Reach The Age Of Reason?
You have to read to find out.

Once this article is written (yes, I am writing this Christmas morning - the littlest Elf woke up early and  got into bed with us and 78 kicks to my ribs later I got up) I intend to start a nice blaze.  Firelogs vs. Wood Fires - What's The Right Choice For A Cozy Winter Fire?  As always, Science Mom has the answers.

Once the fire is built and some presents are opened, it's time to start eating.   Here are some hints on Sensible Christmas Snacking that I intend to ignore.

Before I forget, and you get busy watching "A Christmas Story" for the eighth time, please remember that Non-Flying Reindeer Deserve A Science Article Too - give them a little magic.

And since tomorrow you'll be returning that Dancing Santa you got, you'll need ideas on what to buy instead.   Here are 2008's Top 10 Coolest Science Gadgets (So, Gifts for the Holidays You Didn't Even Know Existed)

Finally, since we began this with astronomy lets end it that way as well.   But the more secular kind, namely NGC 2264 - The Cosmic Christmas Tree Star Cluster Gets A New Image.

And it's pretty spectacular.

Merry Christmas everyone!
Science 2.0
More Articles All Articles
About