Most parents cannot recognize that their child is overweight, a Deakin University study has revealed, with a majority believing their overweight child is of normal weight.

Researchers with Deakin's Centre for Physical Activity and Nutrition Research surveyed more than 1200 families to find out if parents had concerns about their children's weight and if they took any preventative action to avoid obesity in their children. 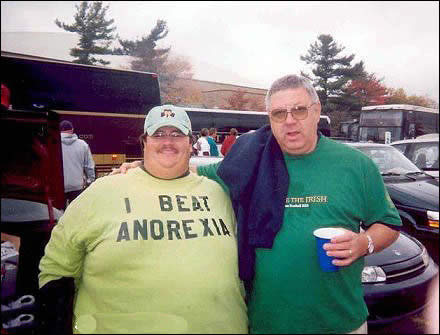 If you look like this, you don't think your child is fat, says the Deakin University report.
"These are quite troubling results and suggest that current obesity prevention campaigns are not hitting the mark with parents," said head of the Centre, Professor David Crawford.

"Parents are part of the front line in the battle to reverse the trend of obesity in children, it is therefore essential that they are armed with information and practical strategies that they understand and can easily build into their daily lives."

Professor Crawford said it was not altogether surprising that many parents were unaware their child was overweight given that "many adults are not able to recognise overweight in themselves."

He suggested that some reasons for the lack of recognition of childhood overweight could be that some parents, particularly mothers, tend to judge overweight by whether or not their child is teased about their weight at school or has developed limitations in physical activity; or that, with childhood obesity becoming increasingly normative, that some excess weight simply goes unnoticed.

Despite parents' inability to recognise problem weight in their children, Professor Crawford said a substantial proportion of parents reported they employed various strategies to help prevent their child from gaining too much weight.

While this is encouraging, Professor Crawford said that less than 10 per cent of parents increased consumption of fruit and vegetables as a potential weight-control strategy, and few reported that they tried to limit or reduce their child's intake of high-energy drinks and limit television viewing.