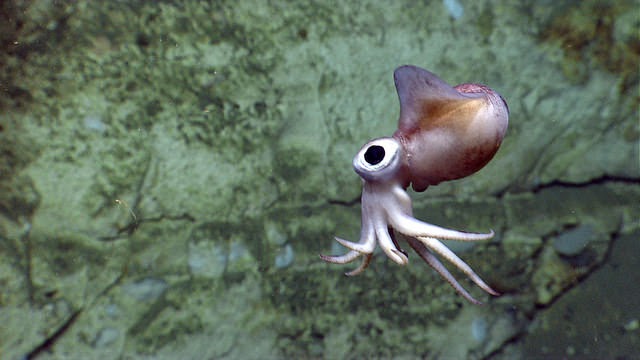 This Bobtail squid was imaged by the Deep Discover ROV in Atlantis Canyon, is less than one foot in length.This bobtail squid is very surprised at the absence of squid gynaecologists! Image credit: NOAA OKEANOS Explorer Program

I first saw squid pimples in 2006, on a research cruise in the Sea of Cortez. The little bumps around the female's mouth looked exactly like whiteheads, as if squid could get clogged pores. They even oozed white stuff when you squeezed, but it wasn't pus.

I was just beginning as a graduate student, learning to extract eggs and sperm from Humboldt squid in order to study fertilization and development—or, as I glibly described my thesis, "squid sex and babies." Though technically I wasn't studying sex, since in squid copulation is separate from fertilization. Females mate and store sperm for weeks or even months before laying eggs.

Males help out by pre-packaging their sperm into complex needle-like structures called spermatophores. Each spermatophore can ejaculate (yes, independently!) to become a spermatangium, a sticky sperm mass that attaches to the female’s skin. Then sperm from this mass moves into the little pimples I saw, which are called spermathecae. Confused yet? I sure was!

In the ship's laboratory, we were able to fertilize eggs with sperm from spermatophores, spermatangia, and spermathecae[1]. But I’m pretty sure squid don't lay their eggs in Petri dishes, so this doesn't tell us a whole lot about natural reproduction. Which of the three sperm sources do females use to fertilize their eggs? Why bother with all the processing steps? Does it have to do with female selection or sperm competition?

No one knows, which is a bit surprising because spermatophores themselves have been studied quite intensively. Videos of spermatophore ejaculation and attachment can be found online, and I've written about more than one exciting new study. But this is the first time I'm writing about spermathecae, and it’s not because of recent research—it's to popularize the lack of it.

Squid aren't the only animals with well-studied male bits and mysterious female bits. A metastudy[2] published in May found similar disparities across phyla, from insects to mammals. The authors analyzed various possible explanations and concluded that cultural bias was to blame. A lingering assumption that sex comprises male activity and female passivity, they argued, has led researchers to prioritize male over female genitalia.

I learned about this study from Ed Yong's excellent coverage, which included an interview with duck penis researcher Diane Kelly. She highlighted a significant practical reason for the research imbalance: male parts tend to be external and relatively static, while female parts are internal and highly dynamic. It’s a lot easier to pop a penis under the microscope than to visualize how a vagina changes shape during copulation.

Why Do Squids Have Penises but not Vaginas?
Squid reproductive anatomy starts out sounding familiar. They have separate sexes—none of this weird hermaphroditic stuff that's so common in their snail cousins. A female squid makes eggs in an ovary, and when they're ready for fertilization they travel down an oviduct. A male squid makes sperm in a testis, and when they’re ready to fertilize, they come out of a penis.

But scientists prefer to call the penis a "terminal organ" because it's a bit different from what we're used to: it doesn't touch the female. It’s just an internal spermatophore extrusion device. The male reaches into his own body to grab the spermatophores with one of his eight arms, called a hectocotylus, which is specially modified for delivery service.


Now things start to get complicated.

Sometimes, in some species, the male places the spermatophores somewhere on the female's body—on her head, or on the eight arms attached to her head, or around the mouth at the center of her arms. In other cases, the male places spermatophores inside the female's body. But unlike the small orifices of our human bodies, all squid bodies have a large opening around the head. Seawater flows in to bathe the internal organs, and the male can reach in to drop off spermatophores. It's nothing like a vagina, which leads exclusively to reproductive organs.

Whether inside or out, the spermatophores ejaculate and spermatangia glue themselves to the skin. They may even start to burrow in, and in some species they can get quite deep—scientists have wondered if the male actually bites a hole before depositing spermatophores[3].

Sperm can remain in the spermatangia until it's time to fertilize. But females of many species also have special pockets for storing sperm, generally referred to as seminal receptacles. These can be external, in the skin next to the mouth, and there can be one or many (as in Humboldt squid). Other species have internal receptacles at or near the opening of the oviducts, such as the pharetra of bobtail squids[4]. These are probably the closest thing there is to a squid vagina.


No one knows how sperm migrate from a spermantangium to a spermatheca. In reef squid, it's been suggested that females move sperm with their arms[4]. Female pygmy squid have been seen grabbing spermatangia with their mouths, but only to remove or eat them, not to transfer them[5]. Some evidence suggests that the sperm could transfer themselves by swimming[6].

Wherever they're stored, sperm must be released when the eggs are ready. If the sperm is inside the body, fertilization also happens inside; if not, the female extrudes the eggs and holds them in her arms—right next to her mouth. (See, that's why sperm are so often placed there. I bet you thought squid were just orally fixated.)

As far as we know, all squid females mate with and store sperm from multiple males. Given the complexity of sperm processing and storage, there's ample opportunity for the sperm to compete with each other and for the female to choose among them. But virtually nothing is known about either process.

Squids Are Weird, and Then Some Are Weirder
Every general statement I've made so far probably has an exception or five. For example, males of some squid species have not one, but two hectocotylized arms. Then, many deep-sea squids don't have a hectocotylus at all. They tend to have a long penis, though, and in at least one species the penis can expand to the entire length of the body[7]. If, as Yong wrote, the story of duck penises is really the story of duck vaginas, then what is the real story behind these variations in male squid anatomy?
In the classic book Cephalopod Behavior, first published in 1996, Hanlon and Messenger reported: We know little about the influence of female choice during courtship . . . We lack detailed observations and experimental studies of alternative mating tactics, sperm competition and reproductive success. . . . The morphology of the . . . seminal receptacle in cuttlefishes and squids should be studied in greater detail and the details of spermatophore transfer recorded.

Almost twenty years later, these questions remain open. The female squid's roles in copulation and fertilization remain opaque. It's time to give squid ladies some respect! In the form of, er . . . highly intrusive scientific research.

This article was first published 31 July 2014 on Things We Don't Know. Reprinted here with permission.
Squid A Day
More Articles All Articles
About