Danna Staaf
Squid sex is both discreet and discrete.

Discreet, because usually the sexual organs remain hidden. The only visible activity looks more like a handshake than like intercourse, as the male uses one arm to pass sperm to the female.

Discrete, because the sperm comes in neat, quantized packages rather than free-flowing semen. These packages are called spermatophores, and they're quite complex. In addition to a mass of sperm, they have a variety of tools for attaching themselves to the female's body.

As explained in a recent paper in the Journal of Molluscan Studies, there are two basic ways that this attachment happens. In some species of squid, it's adhesive--the spermatophore contains a "cement body" that glues it onto the surface of the female's skin. And in other species . . .

The second type of attachment involves deep implantation of the spermatangia into the female's body, i.e. the spermatangia penetrate the integument, embedding themselves completely in the female tissue; this strategy is common to some oceanic and deep-sea species, like the giant squid Architeuthis (e.g. Hoving et al., 2004), cranchiids (e.g. Nesis, Nigmatullin&Nikitina, 1998), onychoteuthids (e.g. Jackson&Jackson, 2004), octopoteuthids (e.g. Hoving, Lipinski&Videler, 2008) and some sepiolids (e.g. Hoving et al., 2009), among others. Despite the advances of recent studies ( Nesis et al., 1998; Hoving&Laptikhovsky, 2007; Hoving et al., 2009), the mechanics of deep implantation remain unknown.

Here's a translation from bio-babble: In some species of squid, including giant squid, MALES INJECT SPERM THROUGH THE SKIN OF THE FEMALES. That's called deep implantation if you want to be poetic, or hypodermic insemination if you want to sound clinical.

And we don't know how they do it.

But actually, that's not even my point! My point is that this paper I just quoted is called "Perforating potential of loliginid spermatophores." Presumably, that's what it's about--the ability of spermotophores to penetrate skin. Note, however, that's it's about loliginids, a group of squid that, as far as we know, use adhesive rather than implantation. So . . . hunh?

Sadly, I haven't read the whole paper, as the Journal of Molluscan Studies is pay-to-play: 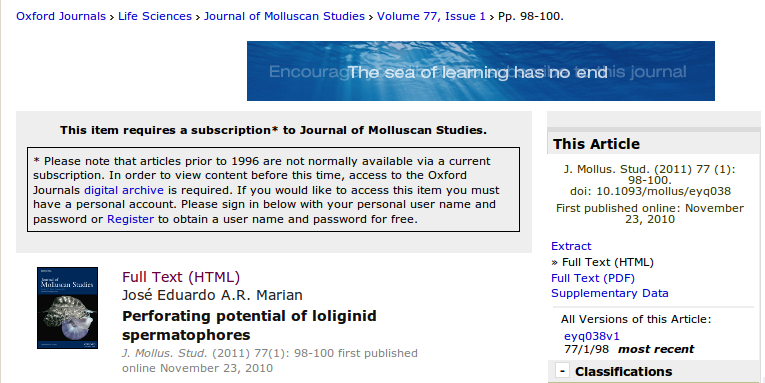 I literally lol'ed when I saw the juxtaposition of that banner ad with the notice that "this item requires a subscription." The sea of learning is actually bracketed with subscription fees.
Squid A Day
More Articles All Articles
About