Danna Staaf
The squid family Ommastrephidae includes my favorite Humboldt squid, along with a lot of other big-time commercial fishery species. How do they sustain the largest invertebrate fisheries in the world? Well, ommatrephids are large, muscular, and abundant, which means each squid you catch has a lot of meat, and there are a lot of squid to catch.

Humans are only the most recent predator to figure this out. Ommastrephid squid have been showing up prominently, and sometimes exclusively, in the diets of fish, sharks, dolphins, whales, and seabirds, as long as anyone's been looking.

Perhaps not surprisingly, they take exception to being every big predator's favorite snack, and have a variety of defenses at their disposal. Ink is the cephalopod classic, and they've got plenty of that. Counter-shading and color-changing camouflage also help them to avoid predators, even as they disguise themselves to fool their own prey.

Ommastrephids have one more trick up their sleeves, that no other cephalopod as far as I know has figured out. 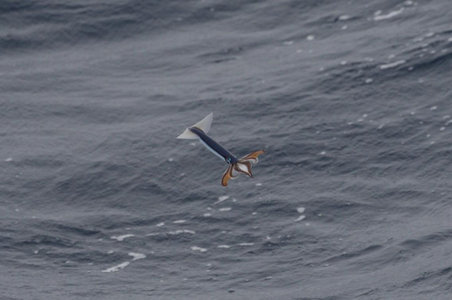