Call them abundant, call them quite rare
It depends on the climate--the sea and the air
One species expands, another contracts
These are the data, these are the facts
Sometimes it feels like they're growing too fast
But it helps them respond and it's why they can last
Through environmental change . . .

I've been talking a lot about Humboldt squid recently, and their ability to respond to poor conditions by simply staying small. If they spawn when they're little, they can't make as many babies, but at least they can keep the population going, until the going gets good again.

Well, Humboldt squid aren't the only ones responding to environmental variability in the Pacific Ocean. Their close cousins, the neon flying squid (Ommastrephes bartramii), have their own set of tricks.

Both the neon flying squid, pictured here, and the Humboldt squid (sometimes also called a flying squid) are in the family Ommastrephidae.

In fact, scientists have a better grasp of neon flying squid biology than of Humboldt squid biology. Some scientists think that neon flyers might serve as a kind of indicator, their abundance illustrating general conditions in the northern Pacific--conditions that affect all kinds of other creatures, too, from monk seals to sea turtles.

We're still figuring out exactly when and where Humboldt squid spawn and migrate, but these details are pretty well understood for neon flyers. They spawn in the subtropics and feed in the subarctic, following one of two migration patterns. Those that spawn in the autumn get lots of food and grow quite large, while those that spawn in the winter-spring get less to eat and don't grow as big. 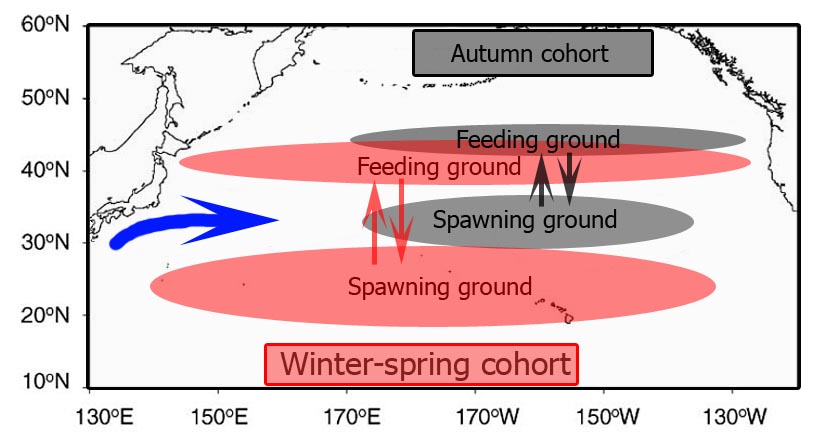 What's curious is that the "autumn cohort" is actually defined by size: mantle length greater than 34 cm. So individuals born in autumn can still end up in the winter/spring cohort--if they don't get enough food as babies, they won't make the migration up to the farther-north feeding ground, and they'll never get big enough to join the autumn cohort.

A group of Japanese researchers has just figured out that that's exactly what happened in 1999-2002, when climatic conditions in the Pacific went topsy-turvy.

The spawning ground of the autumn cohort exists in a particular region called the Transition Zone Chlorophyll Front. You may recognize chlorophyll as the green stuff that plants use to photosynthesize, and if you're a whiz with oceanography, you may also know that oceanographers use chlorophyll as a proxy for productivity. Water containing more chlorophyll is more productive--full of nutrients that will trickle up the food chain, from plants to grazers to predators.

But high-productivity water is often pretty cold water, and baby neon flyers, just like baby Humboldts, like it warm. So spawning grounds for neon flyers need to have both warm water for spawning, and high-chlorophyll water for nutrition.

Now, check out the red dotted boxes in the two images below:

When the ocean matches the image on the right, as happened in 1999-2002, neon flyer babies don't get much to eat, don't grow as big, and--you guessed it--don't end up in the autumn cohort. Indeed, in these years, the researchers found a much lower stock of adult autumn-cohort squid--hence the titles of the two images.

What's really interesting is the immediacy of the response. Squid grow so quickly that you can see the effect on adults in the same year that babies were affected. In the words of Ichii et al.,

Or, to continue my homage to Billy Joel: