Danna Staaf
Whenever friends or family learn that there exists in the depths of the sea a particular species known as the Dana Octopus Squid, they draw the obvious conclusion that I must have been named after this squid, or (even more flattering) the squid was named after me. Alas, neither is the case. Wikipedia reveals all:

Of course, the truly perceptive will note that since my name has two n's, there can be no possible connection between the squid and me.

Nevertheless, it is a truly charming species, not least because it can't seem to make up its mind whether it is an octopus or squid. Observe this excellent photograph of its beak and surrounding arms: 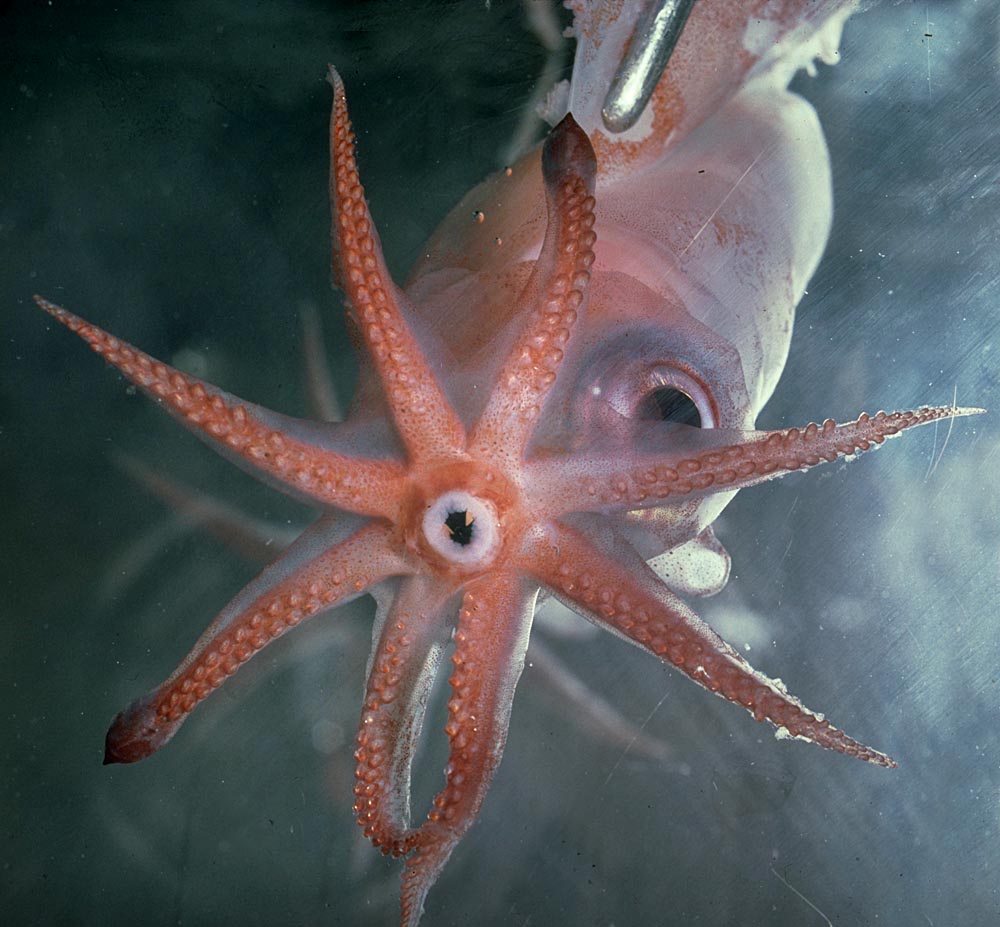 Since the first technique I usually tell people for distinguishing between an octopus and a squid is to count appendages--an octopus has eight arms while a squid has eight arms and two tentacles, for a total of ten--you'd be forgiven for assuming this is an octopus.

But then, observe this delightful illustration of the arm crown of a baby Taningia danae: 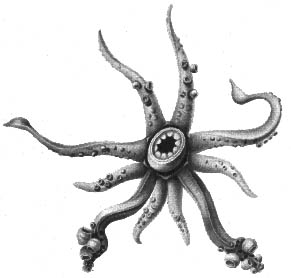 Clearly there are ten appendages! You might even recognize the two longer limbs at the bottom as tentacles, due to the lack of suckers along their length and the profusion of (in this case, enormous) suckers at their tips.

These tentacles are lost somewhere between babyhood and adulthood, a strange trait that Taningia shares with a few other squid, all of them belonging to the aptly named family Octopoteuthidae--the octopus squid. They are, however, true squid, just one of the many peculiar and little-studied groups of open ocean squid.

And no--we've no idea why they lose the tentacles.

But in the case of Taningia, the oddity of the lost tentacles is generally shrugged off in the face of a much more spectacular oddity: the flashing strobes they carry on the tips of two arms. Brian Switek reports on this feature in Wired:

Taningia danae possesses a pair of lemon-shaped organs on two tentacle tips that can be fired like strobe lights. This is a squid that dazzles before it kills.

BEEEEP, goes the buzzer! Those are actually arm tips, not tentacle tips--remember how the tentacles are gone by the time they're all grown up? But aside from this small error, it's a lovely read, as Switek explains that . . .

. . . sticking invertebrates in glass containers and poking them to see what they will do is a scientific technique employed by curious grade-schoolers and professional scientists alike.

Hint: professional scientists are simply curious grade-schoolers, all grown up!

(But we don't even have to lose our tentacles.)
Squid A Day
More Articles All Articles
About