There are some weird octopuses out there, I'll grant you. The tiny-but-deadly blue-ringed octopus. The Dumbo octopus with its "ear flaps"--actually fins. But I propose that Haliphron atlanticus, the seven-arm octopus, outdoes them all. 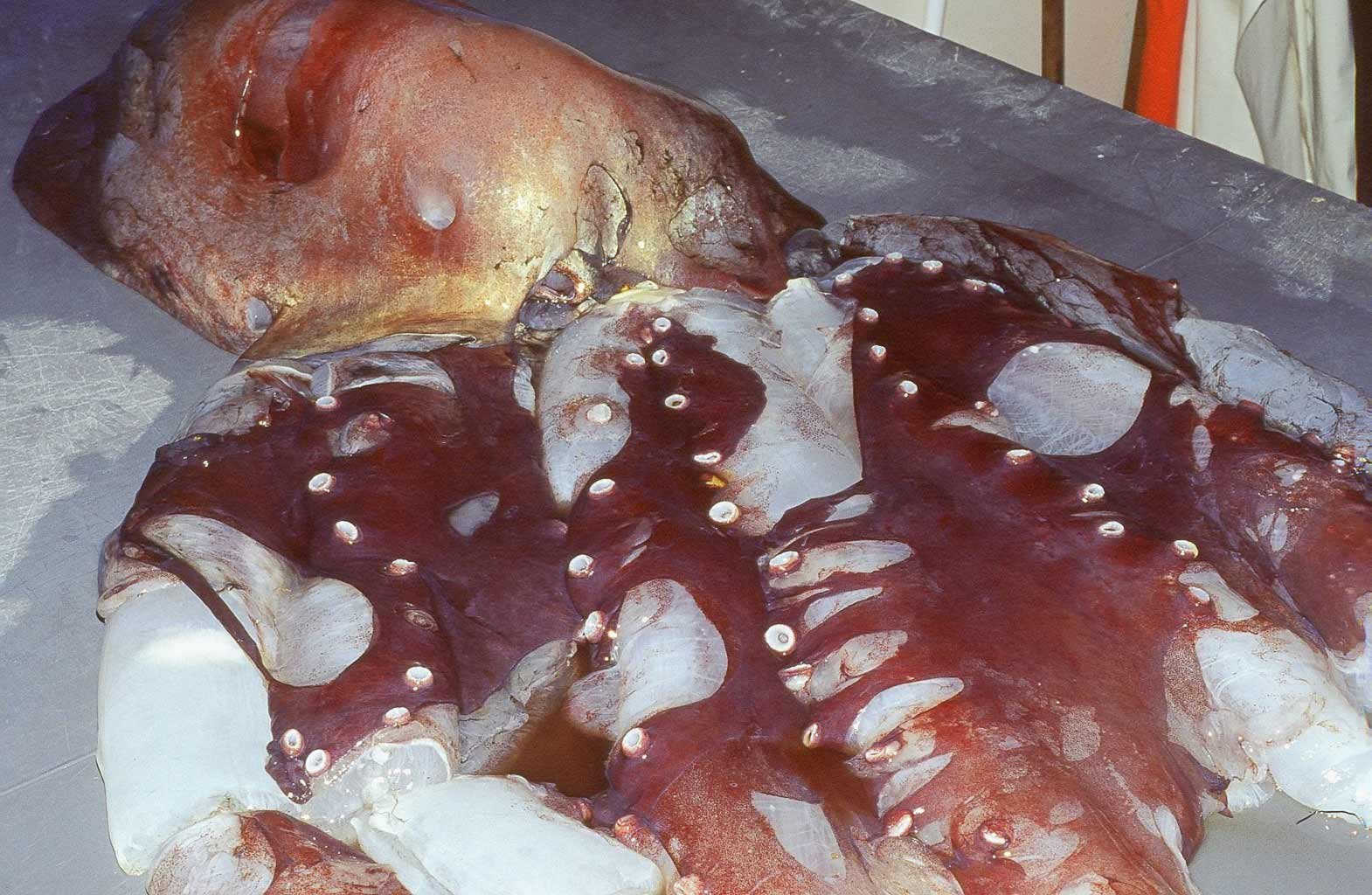 Haliphron is the largest known species of octopus--which is a rather crass way to gain attention, but the appeal of a six-footer is undeniable. But setting size aside, just look at its common name: the seven-arm octopus. Isn't that a contradiction in terms? Here's the deal: in Haliphron males, one arm is so reduced that it looks like they only have seven arms. Weird!

And that's just scratching the surface of Haliphron oddity. Consider that most marine animals live either 1) on the seafloor, or 2) in the open ocean. These environments are so different that it doesn't make any sense to try to adapt to them both. And yet, as eminent cephalopod biologist Richard Young writes:

[Haliphron atlanticus] has been captured in bottom trawls and videotaped swimming within centimeters of the ocean floor (brooding female) suggesting a benthopelagic habitat along the slope. However, it has also been taken from the open ocean thousands of meters from the ocean floor and hundreds of miles from the nearest slope.

But, according to me, the absolute weirdest feature of Haliphron is that, despite its tremendous size, it has barely any body at all! For truth!

Let me explain. Recently I participated in a squid dissection at Camp Sea Lab, during which one of the leaders asked students why a squid is a cephalopod, or "head-foot." One kid immediately piped up, "Because it has no body, it's just a head and a foot!"

However! Unlike squid, Haliphron is almost all head and arms. So . . . perhaps Haliphron is the quintessential cephalopod?

This feature makes a real problem for accurate measurement.

You know I'm always whining about how people measure squid. They'll grab those two elastic tentacles and stretch them out as far as they go, then say, "Hey! This squid is sixty feet long!" But it's not--no more than I am seven feet tall just because I stand on tiptoes and reach my arms over my head.

At least in this drawing the artist folded the tentacles around the body to be less misleading.

Even the eight arms, while less elastic than the tentacles, can be stretched somewhat. That's why scientists stick with measuring just a squid's mantle length--from the fin-tipped end to the widow's peak just above the squid's eyes. The stiff pen keeps the mantle relatively rigid, and consequently its measurement is fairly reliable.

But octopus mantles, lacking the hard structure of a pen, are much more squooshy and less reliable. Furthermore, in the case of Haliphron, measuring the tiny mantle seems almost as misleading as measuring the total length of a squid!

The mantle is just that small cap on the left. Hardly conveys the impression of the whole beast.

And why, you may ask, is the mantle of these astonishingly large octopuses so shockingly small? Well, in the words of my erstwhile PhD advisor Gilly, "What does one need a body for anyway, if you aren't a squid? Just a place to hold your stomach, gills, heart and gonads. That could all be done in a purse."

So how about renaming the Seven-arm Octopus (which only applies to the males and isn't true even then) the Purse Octopus?

Or maybe just Weirdest Octopus Ever. I'll accept either term on the final exam.