Today I am here to fill that gap with a couple of beautiful photographs taken by Nan Hauser, director of the Cook Islands Whale Research Project. For anyone who's forgotten where the Cook Islands are.

Despite its Latin name, Haliphron atlanticus lives in all the world's oceans. On Septebmer 28th, Nan and her colleagues found this female specimen floating dead about a mile off Rarotonga, while following a humpback whale mother and calf: 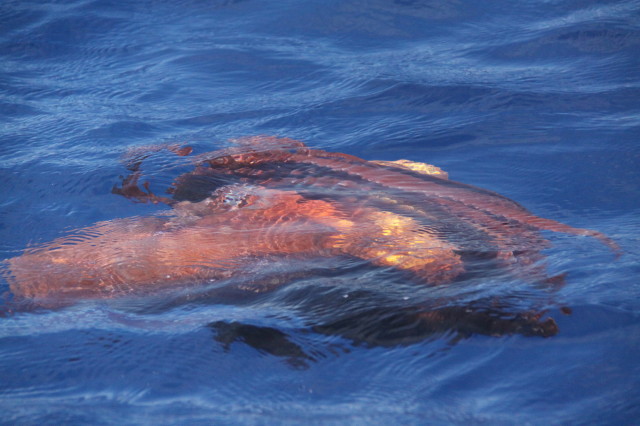 Says Nan, "There was absolutely no injury on it. It was perfect in every way." The small party managed to wrestle it into a cooler and then onto their boat. Back on land, the octopus submitted to admiration by the local fishermen and had its measurements taken. 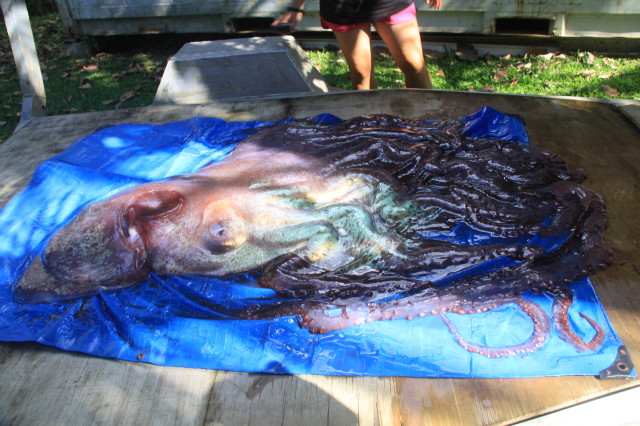 © NAN HAUSER
Amazing how flat it gets when taken out of the water! Typical gelatinous animal.

Then they froze it, which is the easiest way to preserve something huge if you don't have a whole lot of formalin close at hand. Once they have the necessary ingredients, they'll thaw and preserve it, just like the folks at Te Papa did with their colossal squid in 2008.

Since the octopus was dead but undamaged, Nan guesses that it had spawned recently--a terminal activity for most octopuses. However, there is at least one example of a female Haliphron becoming quite damaged while brooding her eggs, so we may be surprised that the Rarotonga specimen was in mint condition. On the other hand, so little is known of this species, we probably shouldn't be surprised by anything.

More than simply weird, Haliphron atlanticus is a beauty and a mystery, and finding one is a rare treasure. In Nan's words, "It was a joyful day!"

Many thanks to Nan for permission to post her photos, and to Gilly for alerting me to the story.