Danna Staaf
If you want to know basic things about animals, like who eats whom, you might guess that your days would consist of watching real-life nature documentaries. You might expect to go out into the savannah or into the depths of the sea to observe predators hunting and devouring their prey.

Actually, it takes a lot of sitting still and watching to see even a single predation event. It turns out you can get a lot more data a lot more quickly by looking at predator vomit and feces. Oh, the glamour of science!

When it comes to squid, the remmants they leave in their predators' guts or scat are usually beaks. These hard, chitinous structures last a lot longer than the muscle that makes up the rest of the squid.

Identifying which beak belongs to which squid, though, can be quite a challenge. Whole books have been written on the subject. And sometimes scientists find bits that they can't assign to a specific squid species--or that they're not even sure belong to a squid at all.

One such scientist, who'd been looking at seal droppings, recently e-mailed a cephalopod mailing list* to ask for help. He'd found structures that looked kind of like squid beaks, but might be something else, and looked very similar to structures described and illustrated by a famous researcher named Berry in 1913. Here's the figure from Berry's paper: 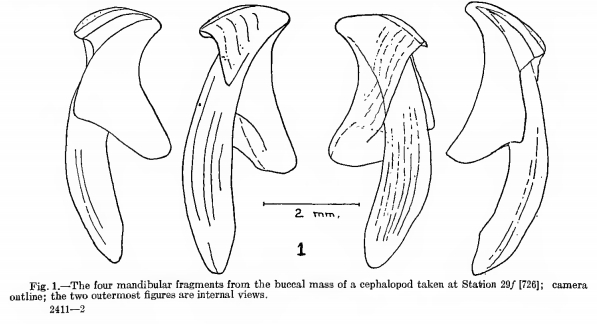 And here's what old Berry had to say about it:

It is not, however, a glad commentary on the sufficiency of our knowledge regarding animals possessing such importance in the economy of the sea as these, that without more complete specimens or a better base of attack than is afforded by the literature, one dares not risk a guess at even the genus or family of cephalopods represented by the fragments.

That was in 1913. Today, in 2012, no one has been able to shed any light on the matter. It would appear that the "sufficiency of our knowledge" regarding these animals has not increased in tandem with their "importance in the economy of the sea." Alas.


* I am actually on two cephalopod mailing lists: FASTMOLL and the Yahoo! Ceph-list. This query came through FASTMOLL.
Squid A Day
More Articles All Articles
About