Doug Sweetser
The Maxwell equations govern light, electricity and magnetism as a trinity. The Big Goal for the next five weeks is to understand my variations on those equations. I want readers to see both the forest and the trees, the planet and the subatomic particles, the math behind the curtain.

Many may fear they don't have the math chops to follow this five week march. The names of the players and their jobs will be explained. There is repetition in this process which may make the steps start to sound familiar. After three weeks, the diligent reader will be rewarded with a deeper understanding of the mathematical intricacies of light, unknowable to poets or priests. My variations are nothing more than that, variations.
Click or skip this reading of the blog

Here is the road map for the next five weeks of my blogs: 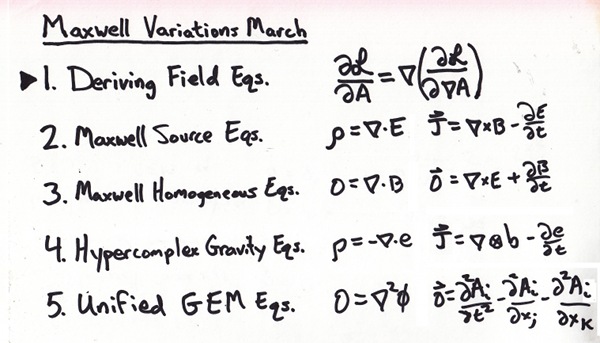 I will include this image in subsequent posts. 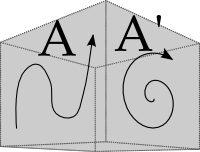 I am writing this blog presuming many readers have not taken calculus, the study of change, or for those that have gotten rusty. Those that have studied the subject will recognize my word substitutions, like "sum" for "integral". Even those who have taken a few calculus classes may not have learned about the calculus of variations. I know I did not learn about it in my four or five calculus classes at MIT. When doing the summing up exercises, the goal was to use simple limits to find simple formulas to get the area under the curve. The game of calculus of variations is more abstract. The goal is not to get a formula for a number, but to find a function that always lives at an extreme, either minimum or maximum. Functions that camp out at extremes often dictate how things move. I highly recommend reading "The Feynman Lectures on Physics", book II, Chapter 19, "A special lecture - almost verbatim" on the topic.

The game we play with the action is to vary a variable so that for whatever amount of time is used, the action does not change for that particular amount of time. Wherever the goalposts are set, near or far, thing don't change. That might sound boring and conservative, but we like conservatives, even the rare politically conservative scientists who can be spotted here on Science20.

Two things just happened in the preceding paragraph: something was changed while another thing did not change at all. The first is called a symmetry. the second leads to a conserved quantity. This is known a Noether's theorem (covered a few years ago here by Georg von Hippel)

Let's make this really abstract stuff concrete. You travel to a foreign land and someone on the street hands you a Lagrange density on a piece of paper. How foreign. You notice the Lagrange density does not have a factor for time (t), or location (x, y, z), or any angles. It has a few symbols that you don't understand. That's OK, because you can say something intelligent about this Lagrange density. Time can be varied, and that makes no difference to the action. This means that energy is conserved for this Lagrange density. The location can be altered too with out changing the action one iota. That leads directly to linear momentum conservation. The ability to alter the angles leads directly to angular momentum conservation. Now you can look for missing things, and then know that a few things are conserved.

The standard model is not a game of missing things. Instead it is a game of seeing specific symmetries which then leads to conservation laws. If a Lagrange density has a symmetry known as SU(3), then it necessarily will conserve the eight charges of the strong force known as gluons. It will also have SU(2) and U(1) symmetries because they are subgroups of SU(3). Physicists have put in special accounting rules to keep the symmetries in separate boxes. But I digress...

In a derivation, I like to number my steps. It makes clear when things start, and when the task is done. Deriving how to derive field equations takes seven steps.


2. Form the action. Add up all spacetime slices of the Lagrange density.

The extreme functions live where this variation happens to be zero.

Notice that there is only one term that has the "orange" term, a variation with respect to the change in the potential.

5. Substitute for the bad guy, the variation with respect to changes in the potential, plugging in the first two terms found in step 4 into step 3.

6. The fundamental rule of calculus - the relationship between adding things up and letting things change - brings out the product rule, the fellow sitting in the middle. The change in the product rule term  turns out to be zero because we are not changing the endpoints. Use your eraser on the middle term of step 5.

7. The variation will be at an extreme if the stuff on the inside the sum in step 6 is equals zero. That will happen if one term equals the other.

A more formal presentation would have indices on both the 4-potential and the upside down triangle. The simple looking side is usually simple. The other side is the scary one. It is no worse than a Sudoku puzzle. You really look to see if a particular letter has been used yet. Nice patterns emerge. Next week I will write out the Lagrange density for the Maxwell equations in its component parts. There are 22 terms in all. The Euler-Lagrange equations have twenty slots to fill.

Don't worry. I will be able to chop this into bite size pieces next week. You made it through this derivation I presume :-)

Snarky puzzle: This one is lifted straight from the start of Chapter 19. Here is the path integral for a ball in a gravitational field.

See if you can spot Newton's law of gravity here?

Next Monday/Tuesday: Deriving the Maxwell equations with quaternions
(Really. I did need to set the groundwork with this blog first).
The Stand-Up Physicist
More Articles All Articles
About