Dave Deamer
In the last few columns, I described how laboratory simulations of a volcanic prebiotic environment showed that interesting organic reactions can be driven by the heat and pressure associated with vulcanism. I also described my own studies of volcanic sites on the present Earth, which we call prebiotic analogue environments, and pointed out some of the problems that arise when we try to duplicate laboratory experiments in the real world geothermal conditions.

In the comments following the column, Gerhard Adam suggested that ice might be a plausible alternative to a hot site for the origin of life.

This was also proposed in a 1994 paper by Jeffrey Bada and Stanley Miller at the University of California, San Diego, who took into account the fact that amino acids and other soluble compounds required for life have finite life spans in water solutions. Furthermore, the half-time of degradation is related to temperature, as might be expected from common experience.

They estimated that the entire ocean volume passes through high temperature hydrothermal vents every ten million years, a blink of the eye in geological time, and the high temperatures associated with the vents (300+ degrees C) would cause amino acids to break down into smaller fragments of little use for the origin of life.

However, if the same amino acids were frozen at ice temperatures, they would last indefinitely. The same is true for nucleotides, the monomers of nucleic acids. Hydrocarbons, on the other hand, are much more stable over time. Oil and other fossil fuels were deposited 300 million years ago when the buried remains of abundant plant life were processed by the high temperature and pressure associated with sedimentary mineral formations thousands of feet beneath the Earth’s surface.

But how could ice have been present on a hot early Earth? There is a consensus that the Earth was initially hot, and that oceans rapidly formed as it cooled down. Yet a relatively warm global temperature at the time of life’s origin is still an assumption.

From physical principles, it can be calculated that four billion years ago the sun only emitted 70% of the energy that it does today. This is called the “dim early sun paradox” because the oceans should have frozen solid!   But did they? To resolve this dilemma,  Carl Sagan and his colleagues proposed that abundant carbon dioxide in the early atmosphere might have acted as a greenhouse gas to keep the Earth warm enough so that the oceans did not freeze, but this also remains a conjecture because we don’t know with certainty for much carbon dioxide was in the atmosphere.

In fact, 750 to 600 million years ago, just before the Cambrian radiation began, our planet passed through a period referred to as  “snowball earth” with ice sheets all the way to tropical latitudes. The evidence for this is geological deposits on every continent and the ocean floor that are consistent with extensive glaciation nearly to the equator.  The geological record suggests that extensive melting and thawing occurred as many as four times in the Earth’s history.

And we’re not talking about more recent ice ages, either, which came nowhere near the global coverage of ice in snowball scenarios. 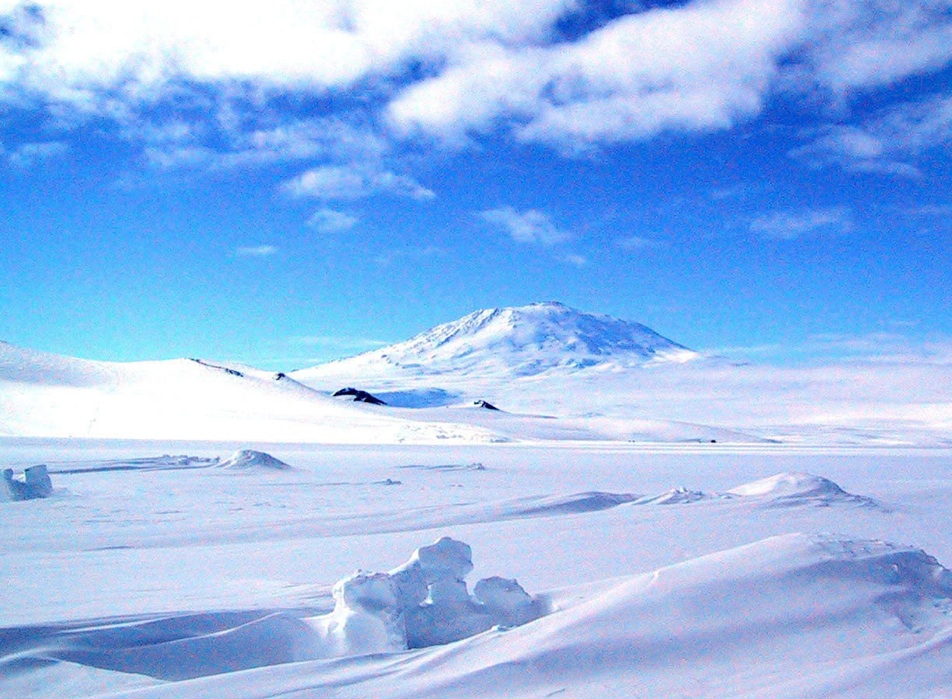 So, if global ice sheets were present as recently as 600 million years ago, why not 4 billion years ago, when the sun was delivering significantly less heat energy to the Earth’s surface? Bada and Miller argued that organic compounds required for life to begin would not be degraded by heat energy if they were embedded in ice. Not only can ice preserve organic compounds, but solute concentration caused by freezing should promote synthetic chemical reactions that cannot occur in dilute solutions.

Several years ago, working with my colleagues Pierre-Alain Monnard and Tessi Kanavarioti here at UC Santa Cruz, we simulated a polymerization reaction in ice. When an aqueous solution freezes, it essentially dries out. The ice crystals that form immobilize most of the water molecules, and liquid films of highly concentrated solutes accumulate in the cracks between crystals. The same thing happens, by the way, when ice wines are made from frozen grapes. The concentrating effect of freezing produces a juice so concentrated in sugars that some is left behind during fermentation, resulting in a deliciously sweet dessert wine.

By the same token, if we freeze a solution of monomers that can’t react because they are too dilute, the concentrating effect caused by freezing the solution should promote their polymerization.

So, what happened in our simulation? We made a dilute aqueous solution of nucleotides, the monomers of RNA, and lowered the temperature to -18 degrees C to produce ice. When we melted the ice a few days later and looked for products, the  monomers had polymerized into short strands of RNA! The result clearly supported the idea that interesting chemical reactions can be promoted by freezing. But there is a catch I haven’t mentioned yet.

Even though freezing concentrates the monomers, nothing happens unless they are activated. In other words, we added nucleotides that had a chemical group attached so that polymerization was energetically downhill and could occur spontaneously. Activated monomers are necessary for the synthesis of polymers required by all forms of life on the Earth. Before nucleotides can be incorporated into the polymers called nucleic acids, they must be activated as high energy triphosphates such as ATP (adenosine triphosphate). Amino acids are linked to transfer RNA by another kind of high energy bond before ribosomes can use them to synthesize proteins.

So the question is, how could monomers be activated when they are frozen in ice?

I don’t know the answer, and no one else does either. This is why I think a hot origin of life is more likely. Unlike ice, there are numerous sources of activating energy available in a geothermal environment that could drive the synthesis of polymers.

Next week I will tell the story of Sidney Fox, a pioneer in origins of life research who was certain that volcanic heat was the answer, but carried the idea a little too far.