Dave Deamer
“May you live in interesting times!” So goes the ancient Chinese curse, and times certainly must have been interesting for Alexander Ivanovich Oparin, who was 23 years old when he graduated from Moscow State University in 1917. Lenin and the Bolsheviks had just seized power, the Czar and his family were imprisoned, then assassinated a year later, and the war between Red and White Russia began.

But the young scientist managed to avoid getting caught up the chaos, perhaps because he was thinking about something far more interesting and fundamental than politics: How did life begin? Oparin began to formulate his ideas in 1922, and in 1924 his book The Origin of Life was published as a Russian language monograph.

The reason that Oparin’s book stands out so clearly as a milestone in the scientific landscape is that no one had given serious thought to the problem of the origin of life after Louis Pasteur concluded in 1864 that life always came from pre-existing life. To account for life on the Earth, several leading scientists even proposed that the first forms of life were delivered to the Earth from elsewhere (panspermia), but Oparin’s basic premise was that living systems must have arisen from non-living chemicals on the early Earth.

In 1928, JBS Haldane independently published a short, prescient essay expressing similar ideas, and we now refer to the Oparin-Haldane scenario for life’s beginning.

At the time that Oparin and Haldane were jotting down their thoughts, it was common knowledge that the units of life were cells, and that protein enzymes were somehow involved in cellular functions. From microscopic observations, Oparin also knew that cells did not appear to be microscopic bags of watery stuff, but instead contained a jelly-like protoplasm.

It was also known that colloids - sub-microscopic aggregates of compounds like starch and gelatin -  tended to be water soluble when dilute, but formed gels when concentrated. The gels sometimes took the form of microscopic spherules called coacervates, and Oparin adopted the term to describe what he thought the first forms of life might have been like.

As examples of such primitive cells, Oparin and his associates published micrographs of microscopic spherical structures that formed when colloidal gum arabic, a starch-like polymer, was mixed with gelatin and heated. 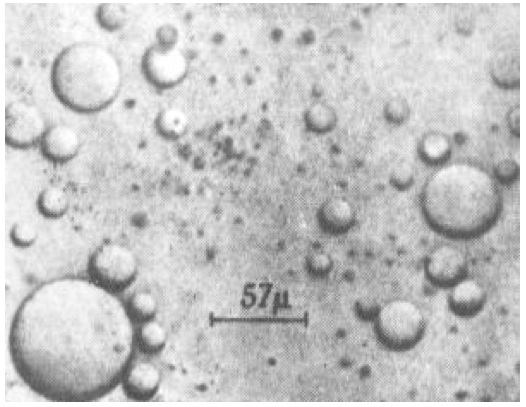 Thirty years passed, and Oparin became one of the premier scientists of the Soviet Union. In 1957, under the auspices of the Academy of Sciences of the USSR, he helped organize a conference in Moscow that attracted some of the world’s leading scientists, including a young Stanley Miller and his mentor Harold Urey, who had won the 1935 Nobel Prize for the discovery and isolation of deuterium.

Nobel Prize winners Linus Pauling and Wendell Stanley were there, as well as future Nobelists Melvin Calvin, Ilya Prigogine and Peter Mitchell. The proceedings of the meeting were published by Plenum Press as a 700 page book, and it is fascinating to read papers written fifty years ago, watching these brilliant intellects wrestle with the question of life’s origin.

Sidney Fox, the director of the Institute of Marine Science at Florida State University was also a participant. Fox had his own ideas about how life began and was one of the first scientists to perform experiments related to the prebiotic synthesis of polymers. In 1958 Fox and his colleague Kaoru Harada reported that heating dry amino acid mixtures to 180 degrees C produced polymers resembling proteins. The dry heat actually melted the amino acids and baked out water molecules so that chemical bonds formed that linked the amino acids together into polymers they called thermal condensation products, or proteinoids.

A few years later, Fox and his collaborators found that under certain conditions the proteinoids assembled into microscopic spherical balls, which they referred to as proteinoid microspheres. These were similar to the coacervate structures described by Oparin, and the fact that they were composed of amino acid polymers made them a more attractive model of a prebiotic protocell than the mixture of gelatin and gum arabic that Oparin had studied. Furthermore, dry heat would seem to be a very plausible energy source for driving condensation reactions.

One imagines, as Fox did, that extensive volcanic activity on the early Earth provided many opportunities to produce interesting polymers. 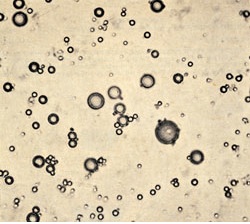 For awhile, there was a consensus that Fox was on the right track, and images of proteinoid microspheres appeared in biology and biochemistry textbooks in the 1970s. But in the 1980s proteinoids were abandoned in favor of RNA, an example of the overturning of a scientific paradigm as described by Thomas Kuhn.

What happened? Why hasn’t dry heat been accepted as the most likely energy source to drive polymerization leading to the origin of life? There are several reasons.

First, heat by itself is not a true energy source. You can heat a solution of amino acids in water as long as you want, but for the most part nothing happens except that the amino acids slowly break down into simpler compounds. A better way to think about the role of heat in a reaction is that it adds activation energy to potential reactants.

If monomers can undergo a spontaneous polymerization reaction, higher temperatures will cause the reaction to go faster. The conditions employed by Fox and his co-workers caused amino acids to polymerize into proteinoid polymers, but the actual chemical energy supplied to the reaction was the dry state of the reacting amino acids. When a couple of amino acids happened to come into contact, a water molecule could pop off and evaporate, allowing a chemical bond to form between the amino acids. This process would continue until a hundred or so amino acids were linked together.

Although this is a plausible way to drive prebiotic condensation reactions, there are significant caveats related the kinds of chemical bonds that form when dry material is heated. A mixture of hot chemicals can undergo multiple reactions, all producing chemical bonds. If the temperature is high enough, the result is a brown or black substance commonly referred to as “tar”.

This is one of the chief criticisms of Fox’s approach, and more generally of the “shake and bake” approach to modeling the origin of life: The reactions and products are non-specific. The particular mixture of amino acids Fox used does form a few peptide bonds, but other chemical bonds are also produced that never contribute to the molecular structure of biological proteins.

Another problem is that no one has yet found a plausible way for proteins or proteinoids to pass genetic information between generations. Nucleic acids can do this, and we now think that the first forms of life were based on RNA rather than proteins.

In his enthusiasm for thermal proteinoid microspheres, Fox became convinced that he had discovered how life began and made claims that went far beyond what most scientists were willing to accept as plausible. Toward the end of his career Fox was proposing that proteinoid microspheres were alive in every sense of the word, growing, reproducing by budding and fission, and even exhibiting a primitive form of nervous activity.

This is a fascinating scientific saga with many twists and turns, illustrating how scientists can be led astray when they try to read too much into their observations. For the most part the shake and bake approach to prebiotic polymer synthesis has been abandoned in favor of defined chemical systems that work in aqueous solutions.

For instance, Luke Leman, Leslie Orgel and Reza Ghadiri recently investigated carbonyl sulfide (COS) as an activating agent. COS is known to be present in volcanic gases, and  has the same chemical structure as COO (carbon dioxide) except that a sulfur atom replaces one of the oxygen atoms bonded to carbon. In 2004 these authors reported that COS chemically activates amino acids so that they react with one another to form peptide bonds. In 2006 the same group discovered that carbonyl sulfide also produces  high energy anhydride bonds between phosphate molecules, a significant discovery because the anhydride bonds of ATP are the energy currency of all life today.

The reactions activated by COS lead to fairly specific products and take place in aqueous solutions, which chemists much prefer to the uncontrolled reactions occurring in dry hot mixtures of amino acids.

Even though the COS activation is an elegant example of how volcanic environments can be linked to prebiotic chemistry, so far true polymers have not been synthesized, only peptide bonds that link a few amino acids together.

I think there may still be discoveries to be made in the shake and bake approach, and next week I will describe how a lipid matrix can organize nucleic acid monomers in such a way that long polymers are produced by cycles of dry heat and wetting.