Dave Deamer
There must have been an abundant source of free energy on the early Earth that could produce the polymers required for natural experiments leading to the origin of life.

Last week I described how protein-like polymers can be synthesized simply by drying and heating amino acids, but I also noted that most of the chemical bonds produced by this “shake and bake” approach have nothing to do with biology. On the other hand, there is no doubt that the energy available in heating and drying can drive polymerization reactions.

If there is a way to organize monomers so that they undergo specific condensation reactions, it might be possible to produce primitive versions of proteins and nucleic acids. The result will at first be a random mixture, but the mix could then be subjected to the molecular version of natural selection and evolution that I discussed in earlier columns.

I think that we can improve on the shake and bake approach by combining cycles of wetting and drying with a process that imposes order on potential monomers. The use of cycles is not a new idea, and it has often been explored by other researchers. We call this a fluctuating environment, and it is a way to “pump” a chemical system uphill toward greater complexity. Polymers are formed by condensation during the dry portion of the cycle, then dispersed and mixed during the wet stage.

The problem is that no one has yet found a way to incorporate such cycles into a plausible pathway that would lead to the origin of cellular life. What we need is a process that combines varying mixtures of potential reactants into small volumes so that immense numbers of experiments can be done.

Well, there is an industrial process that does this, a technique called combinatorial chemistry. When a biotechnology company wants to optimize a reaction that may produce a useful product, they no longer rely on lonely chemists laboring far into the night doing one experiment after another in an attempt to optimize the reaction. Instead they employ a kind of robotic device that delivers small amounts of reactants into thousands of tiny compartments on a plastic plate. Each compartment differs from all the others in parameters such as pH, ionic strength, ratios of reactants and so on. The reaction is allowed to take place, and the products are analyzed to see which particular set of conditions works best.

By doing thousands of experiments in parallel, the robot can do in a week what used to take years of effort by chemists performing experiments in series, one experiment per day.

In previous columns I described how easy it is to make cellular compartments under simulated prebiotic conditions, so it seems reasonable to assume that similar microscopic compartments were available in the prebiotic environment.

Furthermore, under the wet-dry cycles described above, it is also a simple matter not only to produce compartments, but also to fill them with whatever compounds were present in the solution. The image below shows RNA that we encapsulated in lipid vesicles by a wet-dry-wet cycle. 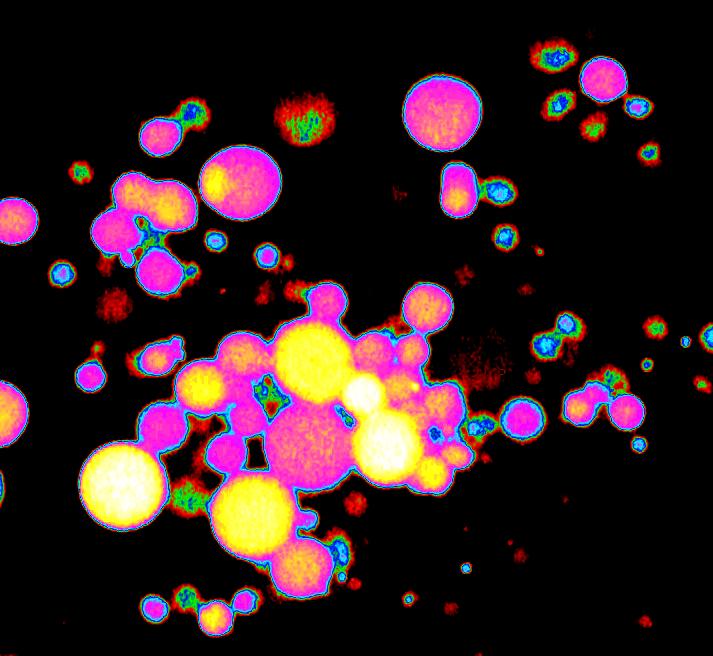 RNA was encapsulated in lipid vesicles and stained with a fluorescent dye. The original image has been color coded to show the variations in the amounts of RNA in each vesicle.

During the drying phase, the solutes are concentrated into very thin films within the lipid matrix mass so that chemical reactions become possible that do not occur in dilute solutions. Not only can the compounds react with one another under these conditions, but the products of the reactions would become encapsulated during the wet phase of the cycle.

If something like this occurred on the prebiotic Earth, the result would be vast numbers of protocells emerging wherever water solutions were undergoing wet-dry cycles in volcanic environments similar to today’s Hawaii or Iceland. The protocells are compartmented systems of molecules, each different in composition from the next, and each representing a kind of natural experiment. Up to this point, most of the processes leading to the production of protocells fall into the realm of physics, so in a very real sense physics came first in the pathway to life.

But now, through the laws of physics, microscopic reaction vessels can be produced in which chemical reactions occur.

Why has no one yet attempted to carry out a laboratory simulation of the conditions I described? The reason is that most scientists prefer relatively simple conditions with just one or a few components so that they can understand and control a specific reaction. This is the accepted style of doing research, and when we apply for research grants, our proposals are typically reductionistic in their rationale.

The idea of putting together a highly complex simulation with large numbers of components just to see what happens will not appeal to any peer review committee. They would refer to the project as a “fishing trip” a phrase that is sure to kill a grant proposal.

Their expectation is that we would be hopelessly lost in the immense complexity of all possible reactions.

Well, maybe. I have been a member of peer review panels that judge the quality of grant proposals, and well understand this concern. But I am also inspired by the boldness of young Stanley Miller when he added energy in the form of electrical discharge to a mixture of reduced gases. His advisor, Nobelist Harold Urey, was very skeptical, predicting that he would only produce “Beilstein”, referring to a famous compendium in the 1950s that listed all known organic compounds, which numbered in the thousands. But instead something else happened. In a perfect example of an emergent phenomenon, substantial amounts of amino acids were produced, and the result sparked a revolution in our thinking about the origin of life.

So I think we should be bold, and go fishing, with the expectation that whatever happens in our simulation, we will learn from it. We may even discover something about life’s origins by being willing to accept the origin of life as an emergent phenomenon arising from a very complex environment, and taking the chance that similar reactions can be reproduced in the laboratory by trusting the laws of chemistry and physics to do the work for us.

Next week I will describe one of the experiments we have done to see if this approach is feasible.