As soon as I read about the claims that Georesonance identified an aircraft wreck at the bottom of the Bay of Bengal my bogusness meter went off the scale.  A whois search shows the company is registered to a small private residence.   The company claims to have identified an underwater object using multispectral images.

Quoted words below are from the Georesonance Pty. Ltd. press release posted by Air Traffic Management.net.

Multispectral image analysis is performed using data which is commonly presented as images of what is "seen" by imaging devices in different parts of the electromagnetic spectrum.  In water the limits of the technology are set by the absorption, refraction and scattering of photons.  In the cleanest, clearest and least disturbed pure water it is barely possible to see objects down to about 275 meters in strong sunlight.  "Super-weak" electromagnetic fields? Forget it.  Sea water is turbulent, its surface is in constant motion and it contains significant quantities of many chemicals - to say nothing of suspended matter and marine flora and fauna.  And let's not forget the garbage.  The suggestion that multispectral imaging - strong or weak - can detect the chemical constituents of any object at over 1 km depth is prima facie absurd.

My Google searches for various clues to the bogusness of this company's claims turned up some very interesting facts over at metabunk.org -

The company itself has almost no history or internet presence before this story
...
Experts at NASA concur this is nonsense, and likely a publicity stunt.
...
This makes zero sense. The suggest that the plane has crashed, aligned perfectly north-south, with no significant fuel leakage, and yet they can detect the fuel in the fuel tanks, and the copper wiring, and the internal engine components, all through the skin of the plane.

I had overlooked the Wayback Machine, so thanks to txt29 for the tip.  It seems that Georesonance was previously selling "Geo-resonance rejuvenation".  The site owner was Alma Sander-Landis, self-described as "Developer and Master Geo-Resonance Technician".

This sort of thing reminds me of the bioresonance scam devices which, although thoroughly debunked, are still being promoted.

The following is a brief summary of the technologies that we apply during the Remote Sensing stage:

NMR spectroscopy?  From images? Under 1km of water?  Tell it to the Marines - or Dr. Hornak.  If he believes it then so will I.

It should really be no surprise to anyone that a company which claims to do NMR spectroscopy under 1km of water using "extraordinary technology" is being ignored.  The scientists, engineers, technicians and others who are trying to determine what happened to MH370 can do without this kind of "assistance". 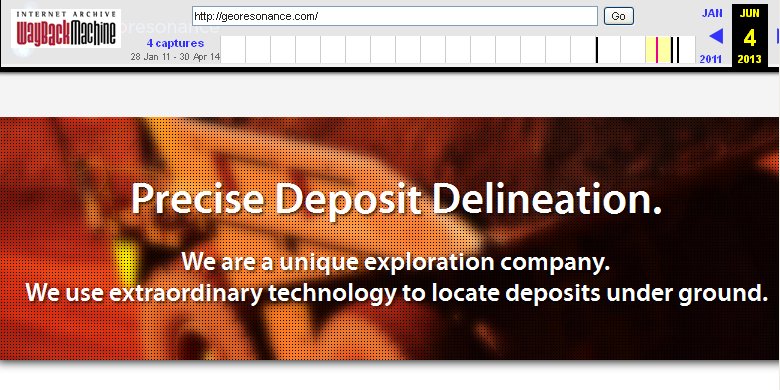