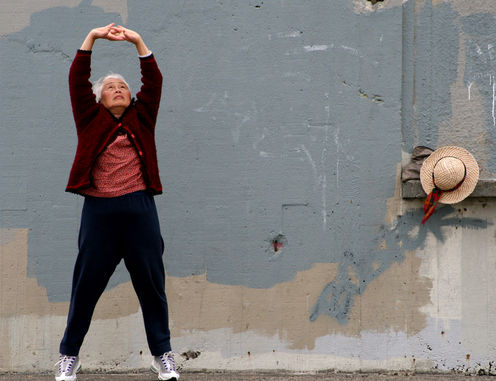 When I was younger, about ten years old, I realized that everyone ages and dies. And I thought well why should that be?

Can’t we do something about it? I then thought I’d do it. I’ll study aging and figure it out, and I’ll find a solution so people don’t have to age and die. And that’s what I do today.

Aging is a decrease in viability and an increase in vulnerability. It means your capacity to respond to external stresses and to function decreases, making you more vulnerable to diseases. One of the major causes of mortality in the elderly is influenza, which is just the common flu.

The thing with aging, of course, is that it entails different levels – molecular, cellular, hormonal and physiological – different organs and different systems in the body, which makes it very complex and relatively difficult to study. We actually don’t know much about aging in the sense of its mechanisms – how and why we age. And what drives the process of aging is still relatively poorly understood. If you look at it evolutionarily, our lifespan has only recently been so long.

Life expectancy is affected by numerous factors such as better nutrition and availability of vaccines, has increased. Around 150 years ago it was something like 40-years-old, and 1,000 years ago about 25 (figures vary depending on whether child mortality and death in childbirth are included). But even as we increasingly reach what appear to be the limits of lifespan, there is likely still scope for even longer lifespans.

Why do we age?

There are hypotheses that damage to DNA probably affects cell renewal in stem cells, which in turn prevents repair in the body and contributes to loss of viability. Then there is the free radicals theory of ageing: the idea that as mitochondria in our cells burn energy with oxygen, it generates very highly reactive compounds, which creates damaging oxidative stress, which in turn accumulates with age and causes aging. There are also things like telomeres, the tips of chromosomes that shorten with cell division. But because this also occurs with age (and is linked to cancer risk), people have said this drives the process of aging.

So after about age 30 your chances of dying double every eight years. This is fairly standard for human populations, no matter where you’re from or where you live. Third World countries may have higher mortality to begin with, but you still see this exponential increase in mortality.

But then you have very unique creatures. One example are birds. Now birds actually live longer than would be expected for them for their size, because they can fly and avoid predators. And one of the species that we are interested in is an organism called the naked mole rat, which lives for more than 30 years.

Why? Because it lives in a protective environment. But then there is an evolutionary pressure to live longer. One of the interesting things about the naked mole rat is that it is extremely cancer resistant. There has not been a single case of cancer in hundreds of naked mole rats.

Probably one of the greatest breakthroughs in the field so far is that you can manipulate different genes and this can have a very significant impact on aging. We know, for instance, that if you start manipulating DNA repair systems, in mice say, sometimes you get what looks like accelerated aging. On the other hand, you can turn off a single gene in mice, like growth hormone receptor, and increase lifespan by 40%.

There are also interventions that modulate ageing. The most famous of them all is caloric restriction. Restricting the amount of calories animals eat (while maintaining essential nutrients like vitamins or minerals to keep them healthy) has been known for decades to expand lifespan in rodents by as much as 50%. And they’re also able to stay healthier for longer.

We do a mixture of bio-informatics and experimental work. We try to look for common patterns among genes to identify new genes that modulate longevity, and ones that regulate other genes. The thing to remember about our aging in general is that it’s very time-consuming and expensive to do experiments. This is one of the problems of aging research.

But it has been calculated that slowing down the process of aging by just seven years could cut in half the instances of age-related diseases at every single age. This would have a massive impact on the human lifespan, and on human health.

Watch the video and animation here:

Joao Pedro de Magalhaes, Researcher on Human Ageing at University of Liverpool, receives funding from the Biotechnology and Biological Sciences Resource Council, the Wellcome Trust, the Marie Curie Actions within EC-FP7, the Life Extension Foundation, the Methuselah Foundation, the Ellison Medical Foundation and the Royal Society.