When we published a paper in 2013 finding 97% scientific consensus on human-caused global warming, what surprised me was how surprised everyone was.

Ours wasn’t the first study to find such a scientific consensus. Nor was it the second. Nor were we the last.

Nevertheless, no-one I spoke to was aware of the existing research into such a consensus. Rather, the public thought there was a 50:50 debate among scientists on the basic question of whether human activity was causing global warming.

This lack of awareness is reflected in a recent pronouncement by Senator Ted Cruz (currently competing with Donald Trump in the Republican primaries), who argued that:

The stat about the 97% of scientists is based on one discredited study.

Why is a US Senator running for President attacking University of Queensland research on scientific agreement? Cruz’s comments are the latest episode in a decades-long campaign to cast doubt on the scientific consensus on climate change.

Recent psychological research has shown that the persistent campaign to confuse the public about scientific agreement has significant societal consequences. Public perception of consensus has been shown to be a “gateway belief”, influencing a range of other climate attitudes and beliefs.

People’s awareness of the scientific consensus affects their acceptance of climate change, and their support for climate action.

The psychological importance of perceived consensus underscores why communicating the 97% consensus is important. Consensus messaging has been shown empirically to increase acceptance of climate change.

And, crucially, it’s most effective on those who are most likely to reject climate science: political conservatives.

In other words, consensus messaging has a neutralizing effect, which is especially important given the highly polarized nature of the public debate about climate change.

Consequently, social scientists have urged climate scientists to communicate the scientific consensus, countering the misconception that they are still divided about human-caused global warming.

But how do you counter the myth that the 97% consensus is based on a single study?

One way is to bring together the authors of the leading consensus papers to synthesize all the existing research: a meta-study of meta-studies. We did exactly that, with a new study published in Environmental Research Letters featuring authors from seven of the leading studies into the scientific consensus on climate change.

A video summary of the new paper into climate change consensus. (2016)

A recurring theme throughout the consensus research was that the level of scientific agreement varied depending on climate expertise. The higher the expertise in climate science, the higher the agreement that humans were causing global warming.

To none of our surprise, the highest agreement was found among climate scientists who had published peer-reviewed climate research. Interestingly, the group with the lowest agreement was economic geologists. 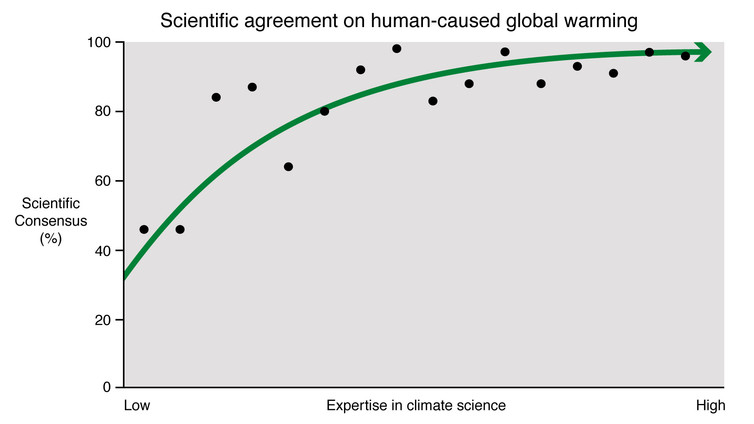 Seven studies quantified the level of agreement among publishing climate scientists, or among peer-reviewed climate papers. Across these studies, there was between 90% to 100% agreement that humans were causing global warming.

A number of studies converged on the 97% consensus value. This is why the 97% figure is often invoked, having been mentioned by such public figures as President Barack Obama, Prime Minister David Cameron and US Senator Bernie Sanders. The relationship between scientific agreement and expertise turns out to be crucially important in understanding the consensus issue. Unfortunately, it provides an opportunity for those who reject human-caused global warming to manufacture doubt about the high level of scientific agreement.

They achieve this by using groups of scientists with lower expertise in climate science, to convey the impression that expert agreement on climate change is low. This technique is known as “fake experts”, one of the five characteristics of science denial.

Another implementation of the “fake expert” strategy is the use of petitions containing many scientists who lack climate science credentials. The most famous example is the Oregon Petition Project, which lists over 31,000 people with a science degree who signed a statement that humans aren’t disrupting the climate. However, 99.9% of the signatories aren’t climate scientists.

The science of science communication tells us that communicating the science isn’t sufficient. Misinformation has been shown to cancel out the effect of accurate scientific information. We also need to explain the techniques of misinformation, such as the “fake expert” strategy.

This is why in communicating the results of our latest study, we not only communicated the overwhelming scientific agreement. We also explained the technique used to cast doubt on the consensus.

By John Cook, Climate Communication Research Fellow, Global Change Institute, The University of Queensland. This article was originally published on The Conversation. Read the original article.