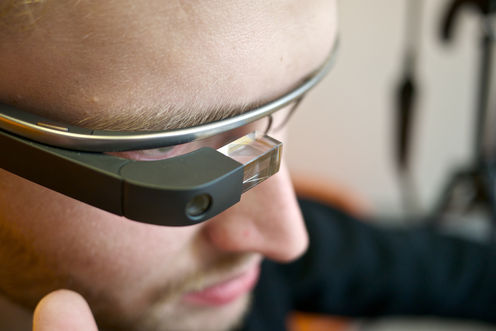 We are only beginning to see what augmented reality can do. Credit: Flickr/Karlis Dambra, CC BY

It seems we are headed towards a world where augmented reality (AR) systems will be as common as smartphones are today – it’s already about to revolutionize medicine, entertainment, the lives of disabled people and of course advertising and shopping.

The big three tech companies have all invested heavily in research and development in the AR domain. Google will be releasing Google Glass later in the year, Microsoft has been working on its own AR device and not long ago Facebook bought the virtual reality (VR) company Oculus Rift.

The notion of AR that these companies are proposing is a kind of “smartphone for the eyes”, as traditional AR and VR converge in the optic realm.

We are moving into an era where we will, on a commercial scale, be taking our visual information in real time and integrating this with a wealth of external information to transform our daily lives. This will give us some degree of control over how we see the world, in the fundamental sense.

For example, we might be offered information about people or objects as they pop into our field of view. Or it could introduce into our visual field view things that don’t exist at all in the real world to potentially filter out of our vision things that are in fact there, such as giant advertising billboards. Bombarded by dazzling ad billboards, such as this iconic one at Sydney’s Kings Cross … Flickr/Luke Zeme, CC BY-NC-SA … you might replace the ads with a beach scene or other images in your own transformed reality. Flickr/Luke Zeme (modified), CC BY-NC-SA

But this is not just another article about the radical changes that AR is likely to bring about.

Rather it’s a call to begin thinking critically about the possibilities AR presents and the idea that perhaps instead of merely augmenting reality, we could transform it.

Extrapolating from the recent history of technology gives us a glimpse of what the future of AR is likely to look like in the hands of the big tech companies.

First, the idea of the “app” will extend into the visual domain, giving us apps that aid us in all the things we already do: building a house, studying at a distance, traveling in a new city and even making love.

Second, the price for access to these new services and of having information at our fingertips is likely to involve surrendering ever more of our personal information. Critically, it will open up new markets for advertisers to promote their products and services in both tacit and explicit ways – an extension of the world of “advertising everywhere”.

The increased human consumption of advertising – driven perhaps largely by the increase of screens in the world – has begun to be referred to by some as the pollution of the mental environment.

By surrendering control over our immediate field of vision, advertising no longer needs to be limited to a screen or a surface but could become truly ubiquitous.

The name “augmented reality” gives it away. The vision of AR that we are seeing in the media and in press releases for products such as Google Glass is a vision of our world as we know it, but perhaps made a little easier through this technology.

In contrast, this technology, that can change what we sense in real time, has the potential to fundamentally change how we live. Do we have the imagination to dream about how instead of merely augmenting reality we could be aiming to transform it?

The transformative potential of this technology has begun to be envisioned by a number of different artists.

In the Artvertiser project, artists have developed an application that replaces billboards within the visual field with images of art. So instead of subconsciously consuming giant advertisements on a billboard from the bank, users could perhaps be consuming artworks by Banksy.

The example above is just the tip of the iceberg. What kind of a built environment do you want to inhabit? Your AR has the potential to change both the cityscape and the horizon, to overlay worlds upon worlds.

Other artists have begun experimenting with ways that the technology could be used to add extra dynamics to public artworks, bringing them to life.

The advent of AR presents a significant choice. Through detection, replacement and synthesis AR has the potential to both add to and subtract from our sensations. Aspects of the environment, even buildings and people could potentially be filtered in or out based on personal preference – our generation is the first in human history that holds this possibility.

The proposal is that rather than simply waiting to see what purposes are dreamed up by the purveyors of this technology, we need to begin thinking about how we want to use it.

Now is the time to start dreaming about how the advent of ubiquitous AR could not merely augment society, but transform it for the better.

Nick Kelly, Research Fellow at University of Southern Queensland, does not work for, consult to, own shares in or receive funding from any company or organization that would benefit from this article, and has no relevant affiliations.