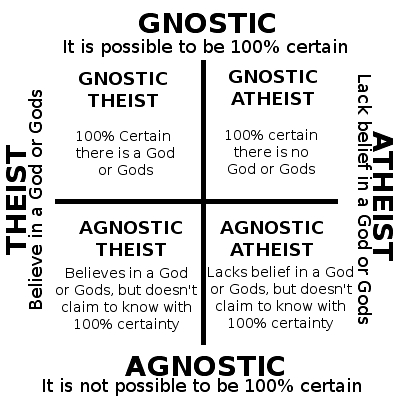 Theist, gnostic, agnostic and atheist. What is the difference? Link: ben-kay.com

Getting on for 14 billion years ago the universe suddenly sprang into life.

I can’t actually do the math, as they say, but I’m happy to accept the word of those who can that the physics is unambiguously nailed down. But for all their undoubted brilliance, mathematicians and physicists don’t know what was going on before the big bang.

There are consequently two possibilities it seems to me: mysterious matter has always existed and spontaneously blows up on occasion; or there is some sort of animating force in the universe – let’s call it “God” for the sake of argument – that got the metaphorical ball rolling. I can’t work out which of these two possibilities seems the more unlikely, which is why I’m an agnostic.

I mention this because religious beliefs and “faith” remain surprisingly important despite the remarkable advances of science and – as we’ve seen yet again this week – a potential source of, and justification for, casually inflicted carnage on the innocent.

While you might get bored to death over dinner by your local agnostic endlessly agonizing about their uncertainties and ambivalence, I confidently predict that we’ll never read about heavily armed non-believers slaughtering passers-by to cries of “I’m not quite sure about the underlying principles of this action”.

Atheists aren’t much better, though, and are often true believers of a different sort. They’re unbearably smug and patronizing at best, homicidal megalomaniacs at worst. The secular supermen who ran the Soviet Union, Nazi Germany or China under Mao unleashed more than their fair share of death and destruction.

But fundamentalists of one sort or another have been at it for a lot longer and have more to answer for. The one saving grace of Christianity is that no-one seems to take it too seriously anymore. There’s nothing like endless religious wars and a reformation to engender a bit of tolerance and pluralism.

Even the current pope seems to realize that he’s not actually infallible. As for recent Archbishops of Canterbury, they don’t believe in God anyway, do they?

Unfortunately, there are still plenty of true believers out there. It seems not to occur to them that the beliefs to which they so zealously cling still have a strikingly geographical basis. Does Christianity really make sense to most Americans, for example, or Islam to most of the population of the Middle East, because of some transcendental theological resonance? I don’t think so.

But even if we put contingency to one side, evidence that God is actually concerned about the sort of religion we subscribe to is a bit thin on the ground – or anywhere else, for that matter. If God does exist, He – always seems to be a chap for some reason – doesn’t seem overwhelmingly preoccupied with our fate.

True, someone can always be relied upon to claim it’s “miraculous” that an individual has survived some earthquake/hurricane/mass atrocity while blithely ignoring the fate of the departed. But the reality is that we’re still routinely dispatched by the tens of thousands with apparently little concern from the Big Guy in the sky.

One of the distinguishing features of modern life is that if God’s around He’s gone a bit laissez-faire on us. In the Old Testament, by contrast, He was very hands on, always smiting someone or other, reducing cities to ashes or performing sundry violations of the laws of physics. Is it just a coincidence that as our understanding of such laws has increased, pre-modern ideas about the nature of God have also gone into retreat?

It is striking that radical Islam is distinguished by a remarkably medieval world view in which critical thinking and individualism – let alone humor – are savagely discouraged. Theological nuance isn’t something the jihadists seem to do. The phrase the blind leading the blind has never seemed more appropriate.

Nevertheless, if you happen to be reading this, God – which your more enthusiastic admirers would have us believe You are, of course – You might do us all a favor and supply a bit of old style empirical evidence of Your continuing existence. Who wouldn’t have become a true believer if their wife was unexpectedly turned into a pillar of salt, for example?

Not sure about the effectiveness of talking to people in dreams or from bushes these days, though: we tend to think such people have just got psychiatric problems.

However, if You could be persuaded to do an old-fashioned, big production miracle, this would put to rest all the questions about Your existence and might even induce a useful sense of collective fate amongst Your increasingly divided peoples.

Could I be bold enough to suggest parting the Swan River near where I live? It’s not too deep so it wouldn’t require much effort on Your part. If You could see Your way to making it a permanent feature I’d be able to walk to work as well.

Mark Beeson, Professor of International Politics at University of Western Australia, does not work for, consult to, own shares in or receive funding from any company or organization that would benefit from this article, and has no relevant affiliations.