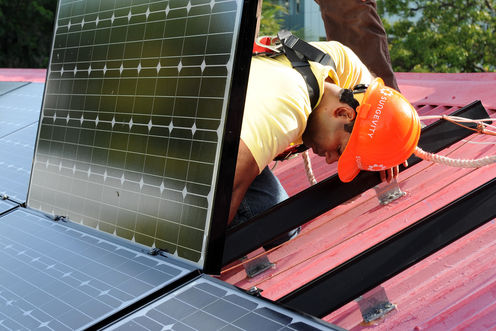 By Morgan Saletta, University of Melbourne

There is no shortage of shouting and dire warnings about the state of the climate and our need to phase out fossil fuels. But there is a more silent revolution happening too — in micropower.

These micro-electricity producers are relatively small scale, inexpensive, and most importantly, produce little to no carbon emissions. Last year micropower contributed to around a quarter of the world’s energy, up from 10% in 2000.

Rooftop solar may be the first thing that springs to mind, but micropower is much more than just solar panels on roofs. The definition of micropower can sometimes be confusing. Amory Lovins and his coauthors discuss this in The Economist’s 2002 book of the year Small Is Profitable and define micropower as “all renewables except big hydro”.

This definition of micropower thus includes wind farms, even though these can be quite large, because of the scalable (you can plant more or less wind turbines), rapidly deployable, and distributed nature of the individual units.

It does not, however, include hydropower plants larger than 50 megawatts or nuclear power plants, even though these are low- or no-carbon.

Most recently, the Rocky Mountain Institute has included industry sales data of co-generation power plants in its analysis of micropower trends.

Co-generation on the rise

In essence, co-generation uses energy twice — once to produce electricity, and a second time as heat. It is often referred to as combined heat and power. By producing heat for buildings and houses, cogeneration is much more efficient than even thermal plants, which only generate electricity.

Co-generation has risen dramatically in the past 15 years, but is often overlooked in estimates of energy production. It comes in a variety of forms and can even use waste gases from agriculture and industrial production.

An even more efficient process is sometimes called tri-generation, producing both heating and cooling. Have you ever seen those mysterious plumes of steam rising from manhole covers in New York, in films like Martin Scorcese’s Taxi Driver? Much of that steam comes from New York’s steam system, which is used to heat and cool buildings in Manhattan.

Trigeneration can convert as much as 93% of fuel into useful energy.

Although many cogeneration plants still rely on natural gas for power, they produces roughly 40% less greenhouse gas than a coal plant. While many environmentalists advocate an immediate switch to renewables, others argue that natural gas is providing a lower-carbon “bridge” while the use of renewables can be scaled up.

It’s not just power plants that are going micro. Micro-grids are being built all over the world, both to increase energy efficiency and to provide adaptable and resilient power in the case of major storms or natural disasters like Hurricane Sandy. This is particularly important as extreme weather events are likely to increase due to global warming.

These micro-grids, which typically incorporate renewables and cogeneration, are designed to be able to operate independently of the main power grid. If disaster strikes, they can produce islands of power to critical facilities such as police, fire services and hospitals.

While more than 260 such projects are planned or operating in the United States, Connecticut has become the first state to role out a statewide pilot. Micro-grids aren’t just helpful during natural disasters — they avoid long-distance transmission, so can reduce line energy losses which can reach as high as 20%.

Cities, and the way they are powered, will undoubtedly play a huge role in the transition to a sustainable and resilient energy future. New York has reduced its greenhouse gas emissions by 19% since 2005. This is partly from an increased use of cogeneration and natural gas, and upgraded city operations using cleaner vehicles.

In fact, while “going green” often conjures up images of Arcadian off-grid living, New Yorkers have the smallest carbon footprint in America. They generate less than 30% of the average national emissions. Compact cities are more energy efficient for a host of reasons, and as many have pointed out, the way to a green future isn’t urban sprawl.

The past and future of micropower

In many ways the rapid growth of micropower is a back to the future scenario.

Thomas Edison envisioned similar systems to provide local power and heat into the future. Power grids and centralized power plants changed all that, and the 20th century seemed to prove Edison wrong.

But clearly things have changed since then, as micro-power’s market share pushes upwards. Technological innovation, changes in energy production and extraction, and public concern over climate change and natural disasters have helped power the revolution.

We certainly aren’t in the clear yet, and the world desperately needs a global climate agreement. The future may still be cloudy, despite the groundbreaking deal between the US and China, but the micropower revolution bodes well for a resilient, secure, and low-carbon energy future. Perhaps every cloud does have a silver lining.

Morgan Saletta, Doctoral Candidate and Graduate TA in History and Philosophy of Science at University of Melbourne, does not work for, consult to, own shares in or receive funding from any company or organization that would benefit from this article, and has no relevant affiliations.