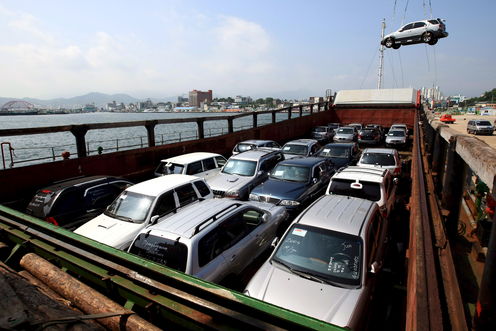 Is this really necessary? Credit: EPA

The Obama administration has proposed several ad hoc multi-country economic agreements, and in doing so has abandoned de facto the World Trade Organization (WTO) as insufficiently malleable to its interests. The two most important of these are the Trans-Pacific Partnership (TPP) and the more recent Transatlantic Trade and Investment Partnership (TTIP).

Even as the latter was being negotiated by US and EU officials, the World Meteorological Organization (WMO) reported that the increase in greenhouse gases is more rapid than expected. The organization’s secretary-general warned that humankind is “running out of time” to reverse rising levels of carbon dioxide that drive climate change.

These two items, agreements to increase world trade and rapidly rising greenhouse gases, call for a bit of “linked up thinking”.

Trade itself is the problem

The US trade and investment initiatives have come under considerable attack for handing too much power over public services to private corporations, for reducing employment rights and for harming national sovereignty.

Whatever the validity of these objections, there is a more fundamental problem. The purpose of the TPP and the TTIP is to increase the volume of trade among countries, and that is inherently bad for humankind because of its environmental effects.

I recently attended a meeting in London with environmental activists, including a well-known British climate scientist. As a result of that meeting I realize that my past critiques of “free trade” have been far too timid and narrow.

The essential problem is not that these treaties foster US and EU corporate interests, though that is undesirable for the rest of us; the problem is international trade itself.

The charts below show why. The two countries with the most exports in 2012 are the US and China, with Germany and Japan considerably further back (both the US and China over US$2 trillion, Germany at just over 1.5).

By no accident, China and the United States are at the top of the pollution list, with Japan fifth and Germany sixth. “But wait”, you say, these are also the largest economies in the world, so the issue is their domestic energy use, not whether what they produce is exported.

World’s leading exporters 2012 (billions of US$) Well, actually, no. A moment’s reflection makes the fallacy clear (and I am ashamed to say that I only just realized something so obvious).

When something is produced domestically, using it domestically is less polluting than exporting it. Production represents only the first contribution of a product to the world’s pollution. While only a fanatic would oppose the transport of bananas from the Caribbean to the UK, restricting the movement of cars between Japan and Europe would seem a no-brainer for the environment.

Many studies show that the domestic production component of industrial pollution is least in Germany, followed by the United States, Japan, and China, by far the worst production polluter of five.

Producing a product for export requires the company in question to transport it to the importer. While ocean transport can claim a greener bill-of-health than aviation, that represents a classical example of “damning with faint praise”. Air pollution from ships is increasing, even as land-based emissions are gradually being reduced. As the campaigning group Transport&Environment points out:

If things are left as they are, by 2020 shipping will be the biggest single emitter of air pollution in Europe, even surpassing the emissions from all land-based sources together.

When companies transport products over long distances the environment suffers. It really is that simple.

Over the past ten years the number of full sea-borne containers has more than doubled (that is, excluding “turn-around” of empty containers). And air freighting fresh fruit and vegetables puts shipping in the pollution-generating second division, the difference between an environmental misdemeanor and a felony. One source estimates the 1% of the world’s food that travels to you and me by air contributes 11% of carbon emissions.

All these transport-generated emissions occur before the pollution caused by the use and then disposal of the products themselves. Production, consumption and disposal apply to all products, of course, no matter their source and destination. But exporting and importing make their own – and unnecessary – contribution to the destruction of the environment.

The huge and growing amount of pollution due to international trade brings to mind the famous critique of free trade by John Maynard Keynes (infamous and blasphemous for mainstream economists):

[But now] I sympathise…with those who would minimise, rather than with those who would maximise, economic entanglement among nations. Ideas, knowledge, science, hospitality, travel – these are the things which should of their nature be international. But let goods be homespun whenever it is reasonably and conveniently possible, and, above all, let finance be primarily national.

Were Keynes with us now (at age 151), he would have cause to omit or at least qualify his endorsement of “travel”. “Flying Clean”, an organization that seeks to reduce aviation pollution, reports “long-haul flights produce on average twice as much emissions per mile traveled per passenger than cars, and short-haul flights produce three times as much”. These estimates let a Humvee pass as green.

So let us join Keynes to imagine if we can a world in which goods are “homespun” and finance is “primarily national”. If we cannot imagine such a world, there is little hope for the planet. The combination of climate deterioration and the ravages of international trade and finance will fulfill the prophecy of Hobbes, rendering life on Earth “poor, nasty, brutish and short”. Less trade not more, to render life on Earth “prosperous, fraternal, peaceful and long”.

John Weeks, Professor Emeritus at SOAS, University of London, does not work for, consult to, own shares in or receive funding from any company or organization that would benefit from this article, and has no relevant affiliations.